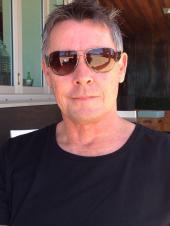 Interests
I am a published writer of fiction, poetry and literary criticism. I am currently working on two novels.

57
more posts until the next milestone.

The Demon Inside
Beware