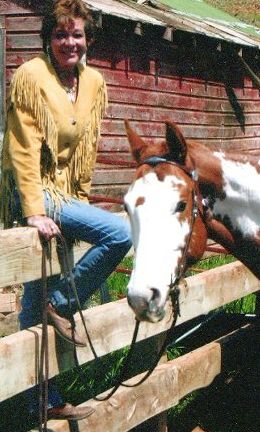 Her screen name is HalfHoff, but could just as well be HoffFull. She wrote a few girlish things in high school, and did not write again until her mother (behind her back) signed her up on a poetry site in April of 2005. Since then, and ONLY because of the encouragement and support of fellow poets, she has written over 350 poems and short stories, and her first book "From My Side Of The Fence" has been published.

She has kissed a lot of frogs and wished on many stars, and still believes that her fairy tale may someday come true. In the meantime, writes western, kinda' romantic, humorous poetry and short stories. She lives on a ranch in the Black Hills of South Dakota with Martin, a yellow lab, Schottzie, a fat wienner dog, Smudgen the cat and too many horses. She wants to thank you for reading her writings and hopes you laugh ... always.

I am so honored to be considered one of your peers. XO Lea Ann

199
more posts until the next milestone.

You Got To Know When to Foldâ??em
Shouldnâ??t have played the extra ace

Pays: 8 points. and 72 member cents
Copyright © 2000 - 2022 FanStory.com. All rights reserved. Terms under which this service is provided to you. Our privacy statement.
top
You Have No Rank
Share 4 posts to be ranked.