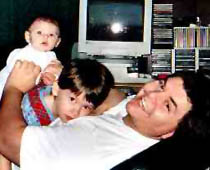 Jack Lewis borrows his pen name from C.S. Lewis. He just turned 34. He just passed his thirteenth anniversary, and has five children (Virginia Rose, 12; Laurelin, 7 (a Tolkien reference); Daniel Jonathan James, 5; Mercy Marie, who would be almost 3 had her tiny body not failed her in January of '06; and Gracie Mae, 2).

He is a difficult person to like because he's not a very tactful person. His critiques, though well meant, often sound overly harsh. The fact is that he is an arrogant snob who has a hard time reading other people's work because he winces at foul language, rime without meter, ill-fated attempts at meter, and free verse without allusion, symbolism, or analogy. Nor does he tolerate wishy-washy philosophies like relativism or 'its-a-poem-because-I-say-so'/'expression-is-king'-ism.

He is quite happy to have found this site; most writers here seem to tolerate his criticism quite well.

His poetry reflects his influences so if you want to know what he thinks or believes--read it. He's been criticized alternately for being too opaque and too transparent, the latter because of his fondness for romantic poetry. To those latter critics he offers this rebuttal:

response to my detractors

Subsequent to a couple of vanity publications by the National Library of Poetry (may they die horrible deaths in accordance with prophecy), Jack Lewis attempted to publish his work in reputable journals. He can only hope he has been successful.

In Other Words, an annual anthology, published one of his untitled poems in its 1998 edition.

Reflections, a quarterly anthology, published three of his pieces in 1998: Death in the Supermarket, Love's Course, and The Seeker and the Vagabond.

Sol Magazine, a monthly online journal, published I would like to have seen Montana in its August 2000 edition, little woman and Sharp Edges in its May 2001 edition, and crash in its June 2001 edition.

Skipping Stones, an annual anthology, published two of his pieces in 2003: O Rapture!, and Reprieve.

SNReview, a quarterly anthology, will be publishing Act I, ocean, and the wild before bed in their Winter 2008 edition.


His book, Axe Against An Elm/Covenant Songs: Two collections of poem selected from the works of Jack Lewis is so titled to make clear that its actually two publications combined. His book received an excellent review in the March 2004 edition of Sol Magazine.

Axe Against An Elm consists of 34 poems specifically chosen from approximately 550, written from 1992-1999.

The poems you see in his portfolio, below, are the poems from which he hopes you, the readers here at Fanstory, will help him select his next collection, as yet untitled. Suggestions in all respects are welcome.

Fanstory writing that he recommends:

POETRY
A
[a bedsheet of bright]
a wail preserved
absence
Act I
Affected
Ambrosia
American
An Old Question (Answered Again)
[And am I now empty?]
[And just like that]
And Now Do You Believe?
angry men
anticipation
Apostrophe
atomic lust

I
I Felt A God
[I kneel before your words]
I See You (Double Sunrise)
I smell honeysuckle when you speak
I would like to have seen Montana
if
illusive
i.m.
Impaled
Imploring
indifferent
individuals
inherency
[inky brown eyes]
Inspired by Psalm 150
Institutionalization
insulated
[it was the warm moments afterward]
I've Seen You

N
N.D.E
Neglected
Nightlight
no postage due
Not a Song
Not Forgotten
not the prize
Now I know why Holly Martin died.

T
[Tell how you look into his eyes]
[the door closed]
A Theme Runs Through It
There Was A Young Woman
Thetis
This Marriage-Bed
[Thought swims like mermaids]
Three (Non-Traditional) Sonnets
Three Stand Still
thrill
Tiara
Time Line
To put it mildly,
[To sculpt perfection in a verse]
To the Teenage Poet
To the Teenage Poet II
To Write the Whole
today
transparent
traveling salesman
Triumph of the Will
triumphant ascension
two pictures (side by side)

U
unbroken
Uncertainty
Understudy
The Undulation of Bellerephon
uninterrupted

W
wake of the unfallen
[Walk with me on memories]
waves
Westerns
What Am I Going to Do With You?
When It Was Me
which way the madhouse walls
why has no one noticed
the wild before bed
wild-maned muse
Window
[words will never be but words]

Y
[a yellowed poplar leaf]
You
[you sit alone]

168
more posts until the next milestone.

Don't miss one of our own....
Read Kaiku


navy days-long monoku
This is a memorial poem.

Pays: 8 points. and 32 member cents
Copyright © 2000 - 2023 FanStory.com. All rights reserved. Terms under which this service is provided to you. Our privacy statement.
top
You Have No Rank
Share 4 posts to be ranked.