I write what I think-feel-believe.
Every essay, poem, and tale tells a complete story.
I write about what's happening in the world.

He is a top ranked author and is currently holding the #9 position.

He is an accomplished poet and is currently at the #37 spot on the rankings. 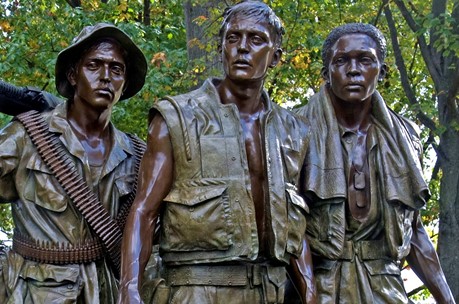 Donald grew up in a small rural town. People could hear him coming before they saw him. He loved to talk, so the townsfolk nicknamed him Jabber.

He graduated from high school in 1968. In those days, you could be a full-time student and not be taken in the draft. He was just thrilled to be out of high school. The plan was to find a job working in construction, or agriculture. He had no great plans of conquering the world. Being just a regular guy was satisfactory.

One July afternoon a letter came from the Selective Service Commission. The draft notice indicated his induction into the Army would be in August. Mom and dad were concerned because they knew draftees were generally headed to Vietnam. A couple of other kids in the town received notices, and they disappeared. The word on the street was, they headed to Canada. Jabber decided to make the best of it and be home in two years.

On August 12, Jabber got on the train and headed to Fort Jackson, SC. His life changed dramatically. For eight weeks he endured basic training. Every Monday there was a rumor that basic training would be cut short and the trainees would ship out to Vietnam. That never happened. He completed training and thought, I can handle this.  After basic, eight weeks of AIT came next. Upon completion, he entered counterinsurgency training.

As sure as, “Day is light and dark is night,” Jabber received his orders for Vietnam. He was more apprehensive of the plane flight because crossing the Pacific Ocean might take forever, he thought.

Upon landing in the country, he and his travel mates were brought to a “reception center.” He received another set of orders. Not recognizing any of the names on the paper, he turned to the GI standing beside him and asked, “Where do you think we’re going?”

He picked up his gear and boarded a Huey bound for a camp “in the field.”

Learning about war was far easier than he wanted it to be.  Jabber became a big hit with his brothers.  The joke in the unit was, if there was “close in” fighting, Jabber would just talk the enemy to death. He was proud of what his fellow soldiers thought of him.

During a patrol mission, three of his buddies were lost. Seeing death and violence so close is a sobering shock. One of the killed was the squad leader, Elvin. He and Jabber had become good friends. The CO talked to Jabber and said, “I want to make you the squad leader because the other men respect you. Elvin once told me he thought you would be a fine leader.”

“But sir, I’m not the right guy for that job. I’m just a regular soldier,”

“Jabber, we are ALL just regular soldiers. I’m choosing you to lead your squad.”

“Yes sir.”  He obviously doesn’t know how scared I am.

Two days later, Bravo Company was loaded onto choppers and transported to an LZ. They were dispatched on a patrol looking for a company of VC.

Jabber couldn’t believe it.  He was the point man leading his squad to a VC nest. How in the world did I ever get into this position?  He led his squad along a tree lined field. As they began to take sporadic fire, he moved his squad into the trees for cover.  He felt sure he knew where the insurgents were. He spoke to Jocko, his number two, and said. “They are not in the trees, they are in that tall green stuff over there. Train the fire at the large green clumps. I have an idea.”

As the squad kept the fire directed toward the target. Jabber moved away from the position. He approached the area. He knew the enemy was clustered in the swampy spot.  As he approached, he pulled two grenades from his vest. He tossed one into the position and rapidly tossed a second one right behind it.  The ambush had been cleared. He turned to see the squad leaving their cover and a second machine gun opened up from a different spot several yards away.  He was in the open and ran toward the second gun, throwing another grenade and firing his M-16 into the target.

He felt the burn as he tumbled to the ground, but also heard the quiet.  The firing was over, and his squad ran up beside him. As they got him to the chopper, he was surprised how little pain he felt. Jocko looked at him and said, “Jabber! Man, you are crazy. Why did you do that?”

“Well Jocko, you got such a pretty face, I didn’t want you to get it messed up today. Besides, I want to get home before you to see just how good looking that girl of yours is. Anybody can look good in a picture.”

“You might get home first but she won’t have anything to do with you.”  They both laughed as the chopper lifted off.

Jabber was strapped on the stretcher but noticed the pain became less intense. He looked over at Jocko and said. “I’m going to beat you home dude. She will love me.” Chuckling over the comment led to nodding off to sleep for the ride.

Three days later, Jabber boarded a flight for San Francisco to head home at last. Passing through the airport, he didn‘t see the protestors carrying the signs with “baby killers” and “war criminals” scrawled on them. The trip home was peaceful.

Three days later, everyone turned out to meet Jabber in his hometown.   All the townsfolk were there. The procession took him home and the flag covering his casket was handed to his mother as she and the family cried an endless stream of tears.

A year later, Jocko came to town to meet Jabber’s family.  They cried together. They walked into the living room, and over the fireplace was a wonderful portrait of Jabber showing his big grin.  Under the picture was a stunning box and his CMH displayed on the mantle.

Jocko looked at the medal and said, “I wish Jabber had been able to have the medal placed around his neck by the president. He might have been speechless.”

Mom said, “No, he wouldn’t,” as sad smiles covered every face.


"Greater love hath no man than this, that a man lay down his life for his friends." [John 15:13]
Pays one point and 2 member cents.


© Copyright 2020. Robert Zimmerman All rights reserved.
Robert Zimmerman has granted FanStory.com, its affiliates and its syndicates non-exclusive rights to display this work.
Advertise With Us
Copyright © 2000 - 2020 FanStory.com. All rights reserved. Terms under which this service is provided to you. Our privacy statement.
top
You Have No Rank
Share 4 posts to be ranked.