I think I always was a writer and a poet, but I remember clearly my Lyceum years and my debut as a writer with a long fiction story. For that one, I was applauded by the prof and students alike. I didn't stop writing and started poetry as well. A - more...

She is a top ranked author and is currently holding the #37 position.

She is an accomplished novelist and is currently at the #67 spot on the rankings.

She is an accomplished poet and is currently at the #22 spot on the rankings.

She is also an active reviewer and is holding the #31 spot on the top ranked reviewer list.

A vision fantasy of the revenge of the Monarch Butterflies. 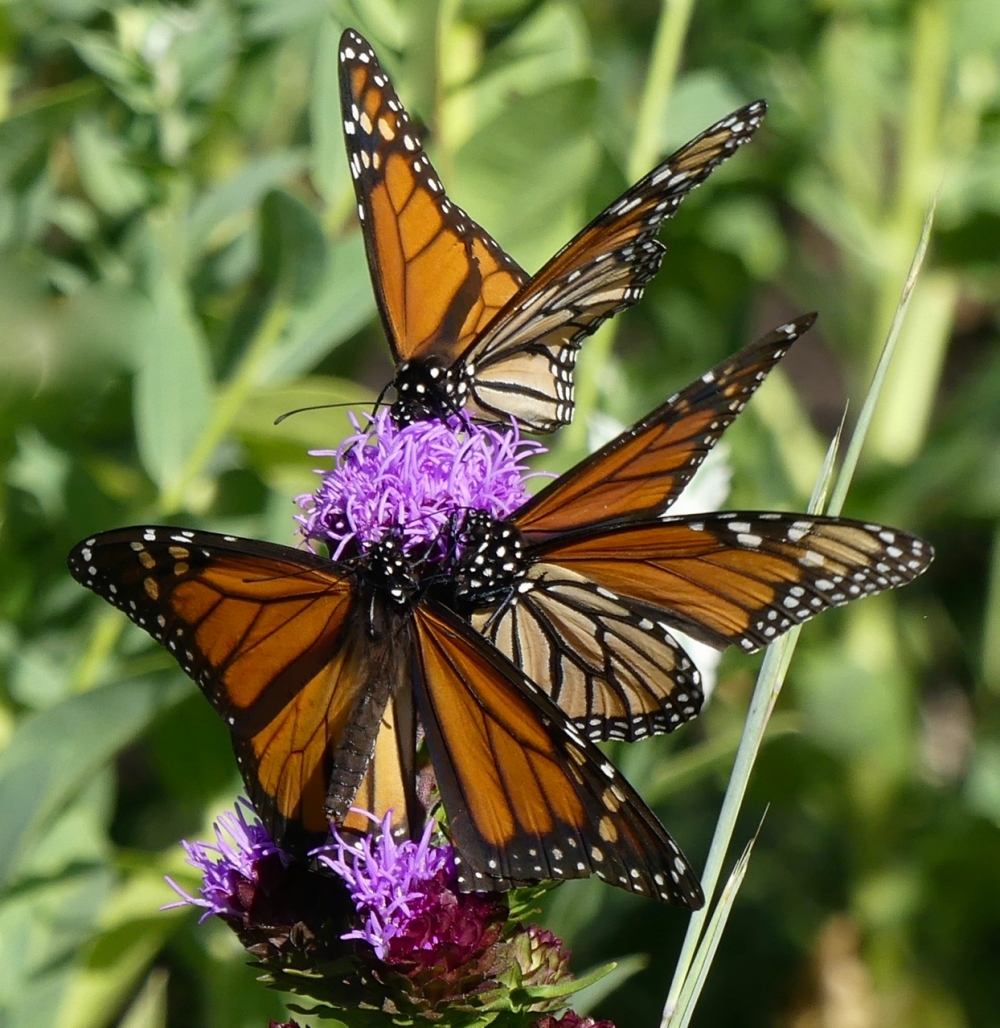 Not all of them were slyly slaughtered.

It all started with the ambitions of a few men, driven by greed and the need (they tried to defend themselves later) to create a larger production of crops for the ever-growing population. Probably they did not even realize at that moment how disastrous the use of pesticides would be, not only for the Monarchs but for all insects that suddenly were deprived of their livelihood. Without giving it too much thought the big farmers sprayed their fields and got a good harvest, but killed millions of butterflies, bees, worms, grasshoppers, and numerous other species in the process.

Some insects survived or could escape, finding new, not yet polluted pastures and meadows where they were recovering and making up for their losses. It was only to be expected that also birds and other animals frequented these little paradises but somehow they found an equilibrium where they all could live happily with the wildflowers, bushes, and trees. Until...

Until their newly found homelands were conquered by the greedy men who with thoughtless cruelty plowed and flattened their scarce refuges. A few insects remained and were sprayed to extinction. Others again moved in search of survival grounds. But their numbers dwindled alarmingly. A few dry, hot summers followed, making the lives of the survivors extremely difficult. Gaia did her best, but could no longer provide a good home for all her children.

A little girl in Sweden reared her admirable accusing voice. "Stop talking, and DO something without delay to save the earth, or we, the children, won't have a healthy world any longer in a few years' time from now". She warned in words that could not be misunderstood against the climate change that threatens to melt the icecaps, will flood lots of low lands and parts of countries. The greedy men laughed and ridiculed her. Accused her of being a troublemaker, but many people (of course the ones without power) applauded her and listened.
What happened to the Monarchs and the bees?

The strong and resistant ones held an assembly. In a top-secret area, they came together and talked for days what they could possibly do to survive this life-threatening situation.
A beautiful, young and strong Monarch was appointed chair-insect of the Top Conference. (I heard from reliable sources that the Conference took place in the middle of the Amazon rain forest in May 2020). Monarch Marius the First, obtained 100 % of the loudly humming votes in support of his proposal. Apart from the Monarchs, all other insects agreed to collaborate, as they all saw the need to unite to make the move a success.

The world and their inhabitants continued to live as they had always done, with small adjustments: one could observe masked people in the streets everywhere now. China was used to this already for some years but in other parts of the industrial world, thick and poisonous smog made breathing in the stinking air a hazardous affair. New, and dangerous illnesses spread like wildfire over the planet. The fabrication of good and reliable masks to protect the nose and mouth (and with that lungs, even stomachs) against the stifling fumes and free-flowing viruses, took astronomical flights and made new people rich. Venice in Italy made heroic attempts with gigantic waterworks to stop the approaching sea to flood the laguna and the city.
In Holland engineers calculated that their dams and dikes to protect Zeeland from the menacing North Sea were not high enough, so for a while unemployment rates lowered and many men were put to work there, reinforcing the dikes, dams, and sluices.

Meanwhile, Monarch Marius the First waited and kept his forces ready to attack at the right
moment. An exceptionally hot September 2020 worked in his favor. Mankind, weary of many months of dry heat, weakened by still spreading deathly illnesses, eating food that now lacked much of its healthy vitamins, was not prepared for the swarm of grasshoppers, stinging mosquitos, bees, wasps, fruit flies, all under the command of Monarch Marius the First, who darkened the sky with trillions of colored Monarch-followers. On the earth itself, the crust suddenly moved from advancing military ants with its allies. "Fell them, like the trees they felled in our rain forests, let them suffer, let them starve as they let us starve by poisoning our food and preventing it from growing again." In all insect-languages, this could be heard everywhere.
Fishes in the oceans, all kinds of animals, they all woke up and joined the forces of the Monarchs. "We claim the earth!" they cried, and in only a few weeks took over, leaving only a handful of humans of each race to live as their humiliated slaves.

By the end of 2020, the earth was ruled by Monarch Marius the first, faithfully following God's rules of peaceful coexistence.

It is my fantasy-vision. Is this what could happen if we refuse to think and listen?
Wake up! Wake up!

If we want a sane and sound world for our children and grandchildren, we cannot afford to wait. We HAVE to take drastic measures and our leaders MUST understand this.
Pays one point and 2 member cents.


© Copyright 2020. Marjon van Bruggen All rights reserved.
Marjon van Bruggen has granted FanStory.com, its affiliates and its syndicates non-exclusive rights to display this work.
Don't miss this both by two of our own! A book by Tootie and Commando

Advertise With Us
C11 - Mix in a Little Magic
Earn BUCKS/POINTS to catch up on the story til now...

Pays: 8 points. and 1.02 member dollars
Copyright © 2000 - 2020 FanStory.com. All rights reserved. Terms under which this service is provided to you. Our privacy statement.
top
You Have No Rank
Share 4 posts to be ranked.