He is an accomplished poet and is currently at the #29 spot on the rankings.

The Seal of Quality committee has rewarded him with 2 seals. He is also an active reviewer and is holding the #59 spot on the top ranked reviewer list.

A Slip of the Tongue 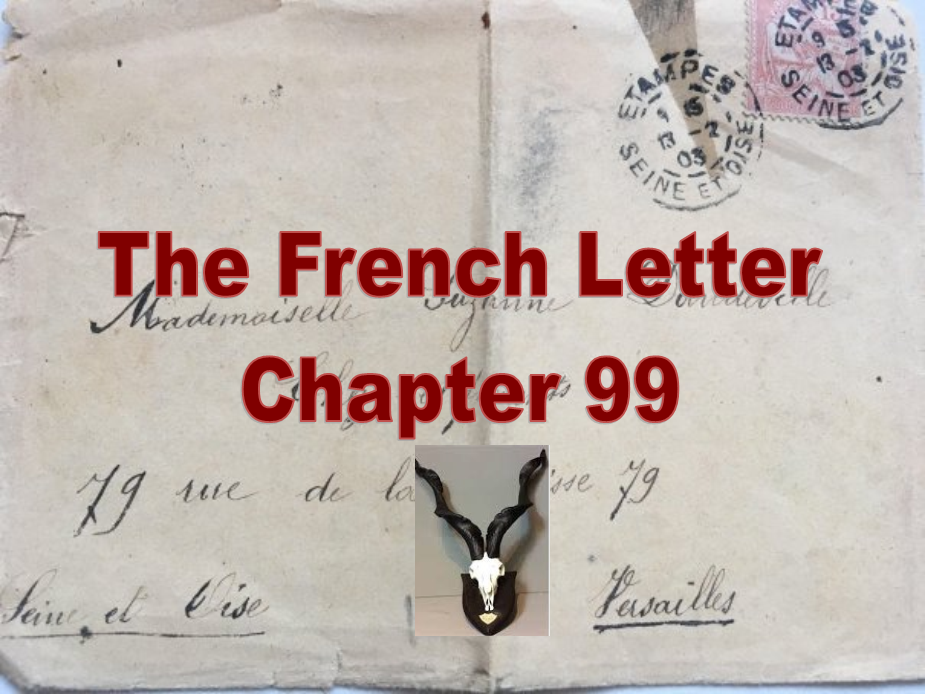 "Oh, I see. A precautionary measure. Rather like a French letter." Bisto blushed furiously. "

Sorry, my dear. I'm afraid that just slipped out."

Kayla giggled. "Did it really? How unfortunate for you."

It took him a moment to realise what she meant. Meanwhile, we both collapsed laughing, leaving the poor man even more flustered than before.

There were still many unanswered questions, but I was starving.

Bisto led the way to the restaurant, a room with the ambience of a Victorian hunting lodge. A gallery with wooden balustrades ran its length. A brass chandelier and lazy fans hung between exposed timber beams.

"Look," I said, pointing to a pair of markhor horns mounted on a wooden shield.

"Not as fine as my trophy," Bisto said, with a disparaging grunt. "I gather they still organise markhor hunts from

here if you have the money and the inclination."

"Helen wouldn't approve of that," I said.

"Nor do I. Nor would any right-minded human being." Having expressed her opinion, Kayla pointed to a table by the window. "Let's sit over there, away from this stuffy, colonial atmosphere."

Woven hangings adorned the walls and an array of copper accoutrements gave the room a cluttered yet comfortable feel that I appreciated, even if Kayla did not.

The menu, when it came, was a pleasant surprise, and our waiter exuded an air of great cheerfulness. He pointed out that most of the dishes were prepared from local ingredients or from produce grown in the hotel's organic garden.

Bisto was expansive. He had obviously done his homework. "This place has a fine reputation," he said. "One of the best restaurants in Northern Pakistan, or so I'm told."

I didn't doubt it. If the dishes on offer lived up to expectations, we were in for a memorable dining experience. Our waiter discussed local specialities and helped to guide our choices. Meanwhile, a girl appeared with a salver heaped with naan bread and placed it in the middle of our table. She wore an embroidered salwar kameez like the one Helen had selected in Lahore. My skin prickled at the memory.

"I say, old man, you look as though you've seen a ghost. Is everything all right? Here, have a piece of this to ward off the hunger pangs. You must be famished."

He wasn't wrong. I devoured the naan bread with a relish that caused the others to glance at each other. "Steady on, Charles. Best to eat more slowly under the circumstances."

Bisto's warning made me colour, but I realised he was right. My stomach wasn't accustomed to plenty, and I needed to be careful. "Sorry," I muttered, brushing a crumb from my mouth and taking a sip of water.

Being admonished like a small child affected me in a way I didn't expect. My veneer of self-confidence started to crumble. Stone walls do not a prison make, nor iron bars a cage. Words learnt by rote at school, but not fully understood until now. I stared out of the window and started to shake.

Kayla leant across the table and put her hand on my forearm. I turned to face her, my eyes glistening. "We have to find Helen."

"When did you say you last heard from her?"

"A few days ago. Madame Durand called me. She said she'd had a message from someone in her network who had been in contact with Helen. Ash, I think she said."

"Ash? Yes, we met him at the High Commission in Islamabad. What did he have to say?"

"Only that she was safe."

"Safe?" I gave a hollow laugh. "I doubt it. She and Jeanne Durand are playing a dangerous game. Why did she contact you?"

"Because she wanted me to come out here. She thought I'd be able to help Helen." The answer was evasive.

I thought I knew why. With Helen forced into hiding, she couldn't carry out their plan to assassinate The Lion. However, Kayla would have a freer hand and equally strong motivation. Playing on the strong bond between her and Helen, it would have been easy for Jeanne to persuade her.

"So, what did Alain have to say about that?"

"He wasn't keen, but I convinced him that Helen was in danger and in desperate need of my help."

I imagined what might have been running through Alain's mind. Although he had weaned Kayla off drugs for a while, he'd know how easy it would be for her to succumb again, particularly if under stress. I realised I 'd need to keep a close watch over her.

Our conversation was interrupted by the arrival of food. I had chosen a local dish called Lajhaik, a thick soup of whole wheat and barley grains, cooked slowly with lamb. Easy to digest, or so I thought.

"That looks revolting," Bisto said. It was true that his kebabs looked more appetising, but I wasn't going to tell him that.

"No sense of adventure," I said. "Anyway, carry on with your side of the story. Tell me about the painting."

"There's not much to tell, really. After the phone call from Helen, I got in touch with your pal, Bamforth, at MI6. I reckoned if they'd got you into this mess, then they should be getting you out of it again."

"I imagine you hit a stone wall there."

I was only too well aware from my meeting with Sir Richard at the Islamabad High Commission that, if push came to shove, political expediency would rule the day. What was it Madame Durand had said in the Paris Embassy? Something along the lines of having to make difficult decisions for the greater good. I knew what that meant.

"You're right. He was sympathetic but said his hands were tied. The British couldn't be seen to be interfering with the internal affairs of Pakistan. However, he explained your predicament, and gave me a few hints about where bribes might most effectively be applied."

"So, not altogether useless?"

"No. As it happens, he was only too willing to help, as long as any official action was behind the scenes. It turned out he had an ulterior motive."

"What was that?" Kayla asked. Clearly, this revelation piqued her interest. Bisto shuffled uncomfortably and wiped his mouth with a napkin. I could see he'd said more than he meant to and was playing for time. A diversion was needed.

I pushed my chair back and started to get up. "Sorry. Not feeling well. 'Fraid I shall have to leave you for a moment." I staggered to one side and caught hold of the back of Bisto's chair for support.

"Here, let me help you," he said. He sprang up and offered a hand to steady me. The other diners looked on with interest as he guided me across the room.

"Silly ass," I whispered. "What's this all about?"

"Thanks," he said. "Quick thinking. Shouldn't have mentioned that in front of Kayla. I'll come up to your room later. We need to speak alone."

"It just slipped out, did it?"

Charles Brandon - the narrator, a well-known travel writer.
Rasheed - a taxi driver in Lahore, radicalised by ISIS
Abdul - a taxi driver in Islamabad, working undercover for the British High Commission
Hassim - a tour operator
Ash - a French liaison officer attached to the British High Commission in Islamabad. Also a member of the French anti-drug squad (la Brigade des stupefiants), whose operations are directed by Jeanne Durand.
Montague (Monty) - a member of staff at the British High Commission in Islamabad.
Sir Robert - the Deputy High Commissioner at the British High Commission in Islamabad (a personal friend and confidante of Group Captain David Bamforth, the British Air Attache in Paris)
Tariq Habeeb - the Senior Superintendent of Police in Chitral
Abdul Jaleel Zemar (The Lion) - Coordinator of an international network of ISIS cells
Helen Culverson - a woman of increasing mystery
Kayla Culverson - her older sister, who disappeared somewhere in Bangkok and has surfaced again in Paris.
Group Captain Bamforth (alias Sir David Brockenhurst) - an intelligence officer with MI6 and Air Attache in Paris
Madame Jeanne Durand - a French magazine editor and undercover agent with the French Drug Squad.
Madame Madeleine Bisset - Helen's landlady in Paris
Mr Bukhari - a Pakistani businessman (now deceased)
Ian 'Bisto' Kidman - an ex-RAF friend of Charles's.
Monsieur Bellini - a denizen of the French Underworld.
Andre (aka Scaramouche) - an actor in Montmartre and friend of Kayla's
Dr Laurent - a veterinary surgeon in Versailles.
Father Pierre Lacroix - vicar of the Versailles Notre Dame church.
Madame Lefauvre - an old woman living in Versailles - the town gossip.
Alain Gaudin - brother of Francoise, a gardener at Monet's house in Giverney
Francoise Gaudin - Alain's intellectually disabled sister.
Estelle Gaudin [deceased] - mother of Francoise and Alain, a prostitute
Mademoiselle Suzanne Gaudin [deceased] - Alain's grandmother, to whom the mysterious 'French letter' of 1903 was addressed.
Jack and Nancy Wilkins - a Wiltshire dairy farmer and his wife.
Gaston Arnoux - Owner of an art gallery in Paris. A triple agent, who infiltrated the ISIS network in France and fed information to MI6, but who is now providing information to Abdul Jaleel Zemar (The Lion).
Colonel Neville Arnoux [deceased] - Gaston's grandfather. Author of the infamous letter of 1903
Pays one point and 2 member cents.


© Copyright 2020. tfawcus All rights reserved.
tfawcus has granted FanStory.com, its affiliates and its syndicates non-exclusive rights to display this work.
Don't miss this both by two of our own! A book by Tootie and Commando