Into the Dark by Candace Nola

Started writing as a teen, mostly poetry and short stories. Working on my first novel, a horror-adventure story of survival.

She is an accomplished novelist and is currently at the #45 spot on the rankings.

Horror tale of survival set in an alternate reality.

A chapter in the book Breach 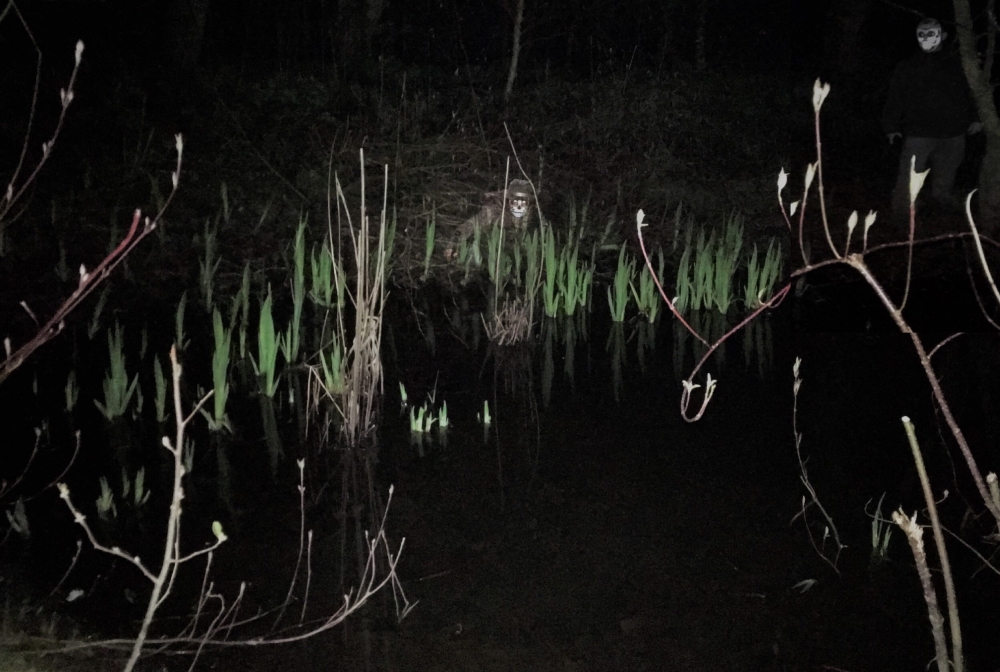 I stood against the rough bark of the tree beside me, desperately trying to control my breathing. Twilight was swiftly giving way to darkness and the forest was heavy with dense gray fog and far reaching shadows. I could hear my heartbeat pounding as I tried to quiet my harsh breathing. My brain was working overtime trying to make sense of what I had just seen. There just wasn't any way to reconcile what I had seen with what I knew to be real.

The creature tearing apart my friends in the clearing was unlike anything I'd ever seen, in reality or in my nightmares. It towered eight feet in the air, on spindly black legs covered in coarse hair, with piercing red eyes looming over its sickly gray body. It roared from a gaping mouth so impossibly filled with razor sharp teeth, that they seemed to be stretching its mouth past the breaking point. Moving like a spider would, it skittered through the clearing, chasing my best friend as she screamed.

The lumps that covered the mass of its body appeared to be faces, skin the same sickly shade of gray as the creature. Writhing just under the flesh of the monster, eyes sunken and black, their mouths opened in horrific shrieks and screams of terror and agony. There were dozens of trapped faces, some clearly human while others were not. There were faces that looked like they had been pulled straight from the depths of hell; pointy eared gargoyles, turtle shaped heads with large fangs, animals that looked like mutated hybrids. What should have been a cacophony of sound, a horrific mix of agony and torture, was muted by the flesh of the creature into a low pathetic moaning sound. The agonized screaming of my best friend overpowered all other noise.

When I had entered the clearing a few minutes ago, returning from washing our dinner dishes in the nearby stream, I had stumbled directly into a scene ripped from nightmares. Unable to scream, unable to breathe, I stood frozen just at the edge of the clearing, barely aware of the wetness spreading down my legs as my bladder let go.

Blood and gore coated what had been our campsite. Two of my friends were scattered in pieces under the monsters legs, or rather, the pieces that remained, an arm, part of a leg, a foot, still twitching. My best friend, barely alive, continued to scream as the monsters jaw severed her torso from her legs. Blood sprayed the tent and still smoldering fire pit as the creature chewed her upper half, blood streaming down from its gnashing jaw while bits of tissue and ruined flesh spattered on the ground. My brain was screaming at me to move, to run, to get away and my legs finally got the message. I bolted for the trees, terror consuming my brain.

I had been running for what felt like an eternity and now I stood here, clutching a tree, trying to remain upright. Shaking violently, crying and gasping to breathe. All while trying to quiet my body at the same time. The monster would be behind me, stalking me through the trees. To hope differently would be foolish; the scent of my terror, my sweat and urine would be raw and potent in the air, it would have caught my scent by now.

Finally able to breathe slower and no longer gasping for air, I stood trembling. My heart was pounding against my chest, every beat like a sledgehammer against my rib cage. Every nerve in my body was on high alert; I felt every hint of air on my skin and ruffling through my hair, heard every sound around me. Leaves whispering to each other, insects chirping in the underbrush and in the distance branches were breaking; loudly being snapped in half as something big was careening through them.

I got moving again, away from the sound, deeper into the dark trying to be silent and unseen, but every step sounded like a thunderclap in the stillness of the woods. The animals and insects had fled or gone into hiding, keenly aware that a predator was close. The darkness hung heavy around me, the humid air making it hard to breathe quietly. My brain was in overdrive, trying to form several plans at once; Hide, escape, fight or flight, survive. I had no weapons, no tools, nothing but the clothes I wore, and a jacket. Overcome by sheer terror, I ran.

I could hear the monster pursuing me, branches and twigs snapping behind me. I could hear pebbles being kicked into the brush as its spindly legs skittered after me through the night. Terror fueled my flight, adrenaline dulling the pain in my leg muscles.

Ten minutes later, I jumped down a small bank and splashed across a narrow stream, hoping the creature was too far behind to hear the water splash against my boots. Scrambling up the bank on the other side, I used my hands to find purchase amongst the vines and slippery tree roots. Upright again, I kept going, trying to avoid trees and tripping over roots. Branches whipped at my arms and face as I ran, cutting into my arms that were raised in effort to protect myself from the stinging branches.

I came to a large patch of thorny vines and bushes, pausing to see how thick it was, how far it stretched. Quickly, I decided to try to go around it, and ran along the edge of it, following the growth to the end. Blindly trying to flee the monster that was coming, I continued running, dodging trees, roots and branches. Several minutes later I came to a thick stand of trees, all crowded tightly together, with barely room to crouch inside the middle of it. Large branches hung down, heavy with wet leaves. Several pine trees in the midst layered their large full branches onto the drooping branches of the trees around them.

I barely hesitated before deciding to try to crawl into the middle of the trees. I climbed over the roots and got one leg inside, and turned sideways to squeeze between two massive trunks. Once inside the first ring of trees, I repeated this process, until I was fully in the middle of the tightly woven copse of trees. I sank down to the leaf covered ground, leaning heavily against the tree at my back. Shakily, I tried to steady my breathing, forcing myself to calm down, trying desperately to listen for the sounds of pursuit.

I did not believe I was safe, but for now, I was hidden. The sheer size of the trees and the lack of space between them would make it impossible for the nightmare creature to reach me. I sat and wept silently with my head on my knees, arms wrapped around my legs. Long minutes passed and I pulled myself together, wiping my face on my jacket sleeve. I tried to listen for any sounds of the creature, but only heard insects chirping in the underbrush. I settled back against the tree and tried to make myself small and invisible, but my smell alone would give me away.

My clothes were soaked in sweat, urine and muddy stream water. The stench of fear and terror hung over me, like the smell of death at our campsite. The memory hit me like a punch to the stomach, my friends, reduced to pieces of bone and tissue. The blood seeping into the ground, pouring from the bloody maw of the monster, the hot coppery smell of blood and the stench of feces from their disemboweled bodies.

Ropes of intestines dangling from the tree branches, viscera strewn everywhere in the clearing, from their bodies being literally torn apart. But only body parts remained, no heads, remembering the faces trapped in the flesh of the monsters body, I shuddered violently and vomited into the dirt.

Would that be their fate? To forever be trapped in the flesh of that thing? Writhing and screaming in agony for eternity? What was the creature? Where the fuck did it come from? It couldn't be from this world, but if it wasn't, where the hell did it come from and how did it get here?

Work in progress. All help welcomed. Edits and changes made 2/6/19
Pays one point and 2 member cents.


© Copyright 2020. Candace Nola All rights reserved.
Candace Nola has granted FanStory.com, its affiliates and its syndicates non-exclusive rights to display this work.