A dare brings a pair of friends to an abandoned park. 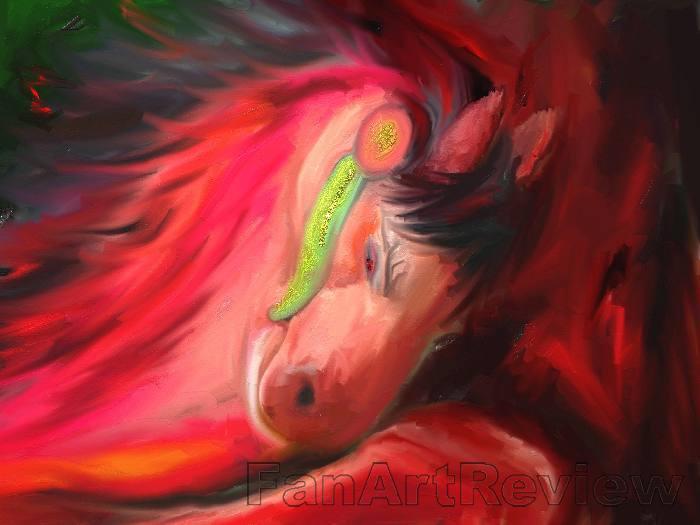 The sign swung back and forth, creaking loudly as it harmonized with the rushing of the wind. "Fabled Forest" it read in fading and peeling paint. Just beneath the sign stood a large metal gate, held fast by a length of chain and a padlock the size of a fist, equally decayed.

Aaron stood in front of the rusted barrier, looking between the chains to the amusement park inside. He took a step back, shuddering despite wearing a sweatshirt on the autumn evening.

"You gotta do the dare," Jason mocked, pushing Aaron forward.

Aaron stumbled, reaching out to catch himself on the chains. They snapped as he tumbled to the ground.

"Guess the rust took care of you getting in, but you still gotta touch the merry-go-round," Jason said, giving Aaron another push.

Aaron opened his mouth to protest, but Jason simply began to rub fake tears from his cheeks with his fists. "Fine!" Aaron shouted, storming off into the park.

Large spires from long forgotten castles of knockoff fairy tale princess reached for the skies, baring their iron skeletons. Aaron gulped audibly and continued on his way. The merry-go-round was not far ahead. In the glow of the moonlight, Aaron could see the chipped and flaking paint of the horses' hides, but the paint on their eyes remained intact, glistening.

"It's just a story," Aaron reminded himself, walking up to the merry-go-round. He turned to look over his shoulder. Jason was still watching him from the gate, motioning him onward. Taking a deep breath, Aaron closed the last couple of steps between himself and the dilapidated carnival ride. The glittering black eyes seemed to follow his every move. "It's just a st-" Aaron began to remind himself as he reached for the horse. The black eyes glinted and Aaron jumped back, pulling his hand back only moments before sharp metallic teeth would have rent the flesh from his bones, and suddenly, everything was dark.

When Aaron came to, he was still lying on the grass just in front of the merry-go-round. "Must've been something in my drink..." he muttered, massaging his temples. "I could've sworn that horse was..." He froze. "Alive."

The merry-go-round horse had turned and was staring coldly at Aaron, straining against the bar that held it tethered to the contraption. Blood trickled from the growing hole in its back and stomach, red splotched with rust as if even the horse's blood had been exposed to the weather.

"This is just a really bad dream," Aaron muttered to himself, trying to push himself back to his feet. The horse gave another lunge, but failed to free itself. "Jason! Jaaasooon!" Aaron cried out.

"What are you crying about now, ya big baby?" Jason asked, standing over top of Aaron.

"The horse! Can't you see it! It lunged for me! It wanted to kill me!" Aaron gasped.

Jason chuckled. "Oooh! I'm so scared!" he taunted, walking over the merry-go-round and smacking the metal horse on the rump. It resounded with a hollow echo.

Aaron blinked in disbelief. The metal horse was indeed just that, a metal horse. A rusted red saddle sat atop the decaying horse, but it was certainly paint and metal.

"C'mon. You did the dare. Now let's go home," Jason said, pulling Aaron back to his feet.

As soon as Jason turned his back, Aaron took one last glance at the merry-go-round. The horse gave a quick, rusty wink.


© Copyright 2020. Idazle All rights reserved.
Idazle has granted FanStory.com, its affiliates and its syndicates non-exclusive rights to display this work.
Advertise With Us
Copyright © 2000 - 2020 FanStory.com. All rights reserved. Terms under which this service is provided to you. Our privacy statement.
top
You Have No Rank
Share 4 posts to be ranked.