Has Anyone Seen A Ghost by country ranch writer

Has Anyone Seen A Ghost 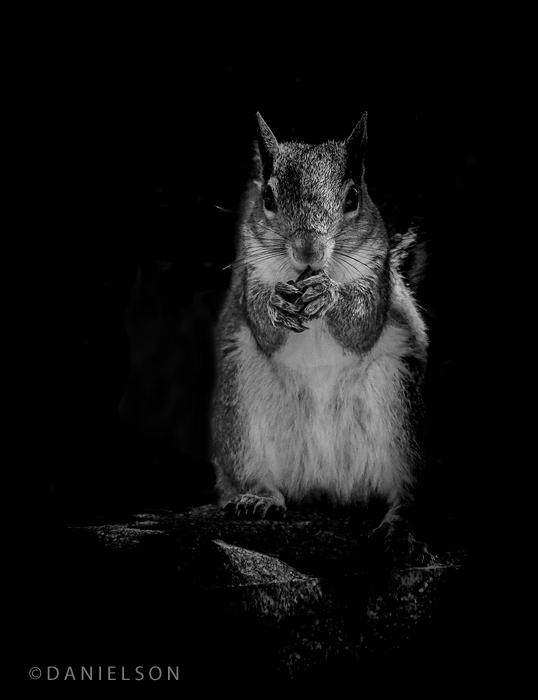 Elmer has lived here it seems forever, over half his life at best.
He was the oldest squirrel of the family and responsible for the lot of them. He has seen the nightly mysteries of the dead in the cemetery. People just think a cemetery is just that a cemetery where they buried their loved ones. Some never come back to visit.
There were problems before in the cemetery but now its ghost hauntings ,witches, and strange goings on.
But. Oh! these ghosts were so much trouble Elmer let out a sigh, scurrying over to the place the crypts were kept. He squeezed into his house and set down in his chair with relief and exhaustion. It was times like these he missed having a loving,caring,concerned father around. He was having problems with the rest of the wildlife to help keep the riffraff out of the cemetery.
One night the man who took care of the cemetery squeezed a note into Elmer's door. The note said, "I am sorry about your mother but she was shot by a hunter on her way to work."
"He said he was so sorry for our loss." Elmer read the letter to the family he'd said, his voice filled with emotion.
I begged her not to go this morning but she was determined to get supplies. She just wouldn't listen. It's just us now so we will have to take care of each other.
After Aunt Sadie, came in to tuck them all in. She kissed each one and tucked them in and said, hush babies your mamma is all right she is in heaven. Everything will be fine in the morning I will be here.


Out in the human world, Trace was coming to live in his Grandfathers old house across from the cemetery. Trace didn't believe in ghosts or all the stories he's heard about them. He was just happy to have a place to live after coming back from Iraq.

While unpacking and getting settled in he heard footsteps and went downstairs thinking someone was there. Oh!well he thought to himself it must have been his imagination. Lost in thought standing in the doorway he was thinking of his grandpa as he looking over at the cemetery from the back porch. He didn't hear anyone approach and when the old caretaker put his hand on his shoulder he jumped.
"I Am truly sorry sir, I didn't mean to startle you so bad."The Old man said.

"I'm all right." Getting an uneasy feeling in his bones when he said this. Trace already had bad memories haunting him from years ago. Now here he is going to be living here," what was I thinking?"
This house has always been forlorn and sad ever since I was a kid.The old man said off handily it looks like you can take care of yourself. He was looking over at Traces jacket with the medals on it draped across one bag
"I'd rather not talk about it sir, Trace told the old man.
Okay son not pushing.I will be going now if you ever need me you know where to find me. Trace said right will do.
After finishing unpacking Trace took a tour around the old place remembering despite all the weird happenings he still didn't believe in ghosts. Suddenly he heard a strained shaky voice ring out." Where is everyone? Where is my whiskey?

It was his dead grandfather! Someone must be pranking him. But how? No one knew he was home.
Trace said to himself this can't be he is dead! Unsure what to do he raced up the stairs to him. As he did so the old gentleman slowly disappeared whispering I want my whiskey. Trace called out to, "come back Grandfather, I will pour you a whiskey for you if that's what you want."
"Waite a minute am I going nuts?" Trace, said to himself now, I'm talking to ghosts now?
While down in the basement looking around there were old people walking back and forth he knew they weren't real people because he could see right through them. One old man had on a rebel uniform and loaded his gun and pointed it right at Trace and pulled the trigger. He was accusing Trace of bedding his wife. There was an indent on Traces shirt it knocked him on his butt. how could that happen? Going back upstairs he was quite shaken over the whole ordeal. In the hallway by the stairs it became so cold as you approached Grandmas old room.
The old man from the graveyard stopped by for a chat. Trace tried not to be rude to him, but let him know that he only had a little time to spend here at Grandfathers before starting his job.
He wanted to spend as much time as possible finding out about his Grandfather's death

Trace said, there is danger everywhere, "What do you know about his death?" Old man said,
Not much really they said he went quietly in his sleep is all I know. He always fed the squirrels from the cemetery, they got where they would come visit him regularly. Then he got word the mamma squirrel had got shot and killed by a hunter and the rest would not trust a person again. I think it weighed on his mind.

Nothing was safe anymore. The cemetery has been ransacked and said to be taken over by the outsiders. The old man said the cemetery is to keep the ghosts in and people out. Trace assured the old man with him living their things would get better.

There's No Such Things as Ghosts writing prompt entry

New fences were put up and a guard was housed there to protect the place. Yes.the old man still live on the grounds.
Pays one point and 2 member cents.