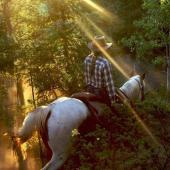 A mare has a foal

On The Wind Blows Death

Thunder rumbled, the sound low and ominous across the plains, as the band of mustangs grazed the grasslands.

An aged mare scanned the ridges and shadows beneath the rocks for predators, her nostrils flared, inhaling deeply, as she searched the wind.

She needed to be alone when her foal entered the world. She glanced around at her herd mates before nonchalantly meandering along an antelope trail that led to a nearby arroyo. She went slowly, her belly bulging with the foal that was determined to be born. She picked grass and stopped, making sure she was alone as she chewed the tough growth. She finally disappeared down into a small sandy area that would be a temporary sanctuary. A place where the foal would hopefully go unnoticed and could nurse as it gained strength to survive.

She could not know, nor could she see a mile above her as an ever-watchful eagle glided effortlessly on the updrafts, his six foot wide wing-span carrying him on the wind as he circled, watching the mare. He knew what the lone horse was doing, he had feasted on foals before. Usually the ones that had not lived, but the great bird was more than capable of taking a live newborn if the mother were not diligent. His sharp eyes kept watch. He would not leave until the opportunity was a certain loss.

It was May, but the wind had a chill that blew harshly on the mare as she lay on her side, the pain causing her to grunt and blow her breath out in sharp bursts. The birth took longer than usual, the mare was getting old and it was harder to have babies now. Finally though the filly slid out of her mother's womb, a tiny replica of the little sorrel mare.

The herd was aware that the old mare was gone. Instinct told them it was okay, but one of the yearlings went to investigate. He stood above the mare, on the edge of the ridge, snorting with mild fear at the new smell he was not accustomed to.

He watched as a tiny horse lay on its side, and bucked in place with odd excitement as the mare snuffled and tore at the protective sac. Gently, with soft nickers, she cleaned the baby and nudged it, encouraging it to stand and nurse. It had to drink the colostrum quickly in order to survive. But sudden rage took over when she saw the yearling intruding so bravely. The mare charged furiously half-way up the bank to warn him away. He flung his head in defiance, but knew not to stay and made a bee-line back to his own dam.

As the filly wobbled to her feet, a clap of thunder scared her and she toppled over, fear causing her to lose her newly acquired balance. The mare held her ground, she had gone through many storms. But never with a brand new baby at her side. She moved around as if to shield the filly from the storm. But the wind was strong and the sounds of lightning and thunder were horrendous to the little horse. She tried to run, but wobbled and fell into the shallow water of the arroyo. And as the rain began to pour the ditch became flooded. The mare frantically ran up and down as her baby was washed away in the torrent. She finally jumped in the rush of water, but it was too strong and she could not fight it. She was washed along behind her filly and both would drown as the arroyo filled.

The canyon walls echoed with the sounds of the storm and as the herd ran to escape it, their matriarch disappeared into the red water of the river, never to be seen again.

And as it is when Nature has her way, and after the sudden storm had moved on, a small form appeared on the edge of the water as the river once more receded. Above it the eagle noticed, and took determined flight toward its next meal.

It ate at the filly's eyes first, and gradually worked into her stomach. But his work was done when a cougar discovered the carrion and pulled it away from the bird. He screeched at the cat in anger and lunged at her eyes with his huge beak, but she held tight her prize and won her own right to survive.


The stallion missed his lead mare, and tried to push the herd back to the area where she had disappeared, but they all ignored him and grazed the newly rainwashed grass, oblivious to the loss.

He whinnied loudly and persistently, but she was gone. So after a time, he too lowered his head and the green grass of Wyoming let him forget, and live another day.


I wish I could have lived and raised my son out west. Thank you for reading and to Photobucket.com too, for a nice picture.
Pays one point and 2 member cents.


The Earliest Memory
It felt raw, even after 95 years

Pays: One point. and 27 member cents
Copyright © 2000 - 2022 FanStory.com. All rights reserved. Terms under which this service is provided to you. Our privacy statement.
top
You Have No Rank
Share 4 posts to be ranked.