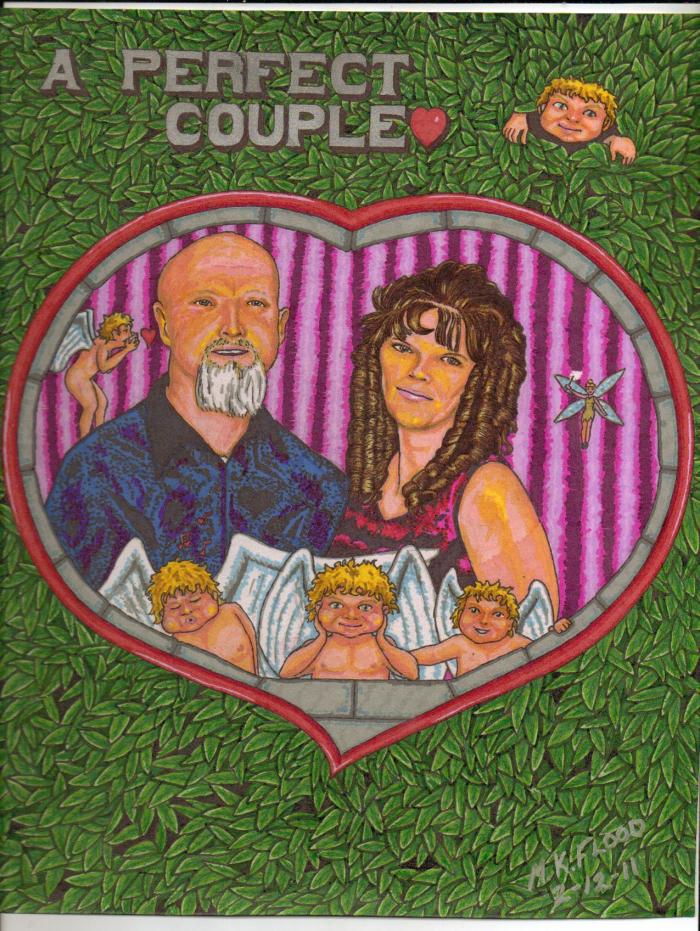 Arthur and Gertrude had been married sixty-two years now. They'd grown together teaching each other the important things like trust, kindness, teamwork, putting each other first, and balance. Though age had slowed their curtain-blowing volcanic explosions, their passion never waned and the sparks remained ignited. They still saw fireworks when they looked at one another.

Dinner finished, they sat on the porch in their rockers watching the world go by simply enjoying one another's company. Periodically they held hands and gazed dreamily into each other's eyes remembering younger days when children ran underfoot and every moment seemed full of diapers and scrapes. When he realized she had dozed off, he rose and put a blanket over her legs to protect her knees and quietly stepped indoors to retrieve her special Valentine's gift. He hadn't missed in sixty-one years. Chocolate-covered almonds from Martinson's Candy Company!

Her first beau had brought them every time he visited and she displayed them proudly on the side table in the parlor. Then Arthur came along and swept her off her feet. Once he found out that priceless piece of information, he never let Valentine's Day go by without getting her a box. Each Valentine's Day after, in good times and bad, through depression and recovery, children, work, and retirement, he'd presented her with a rectangle box from Martinson's meticulously wrapped in bright red paper with a red and gold ribbon that he proudly wrapped himself.

Earlier that day, he'd carefully folded each corner in place taping it neatly the way she had taught him so many years ago. His arthritic old hands had difficulty with the ribbon now but he patiently wrestled through it smoothing out the ends so they wouldn't show signs of the struggle. He took the box outside and laid it gently in her lap.

Gertrude opened her eyes and peered over at him as he took his seat. At first, she said nothing, just smiled. It wasn't unexpected. After sixty years, what's different? she thought. She laid her hand softly upon his and said, "Thank you, dear. It's lovely. Now, can I make a confession to you?"

"Arthur, sweetheart, I think it's time you stopped buying me these chocolate-covered almonds. I appreciate them. Really, I do. They're precious and you go to so much trouble to make sure I have them. But I quit eatin' them over twenty years ago when I had to watch my sugar. I haven't opened a box in years. Besides, they kept getting stuck in my dentures. I sort of lost the taste for them. I hope you're not upset," she said leaning forward to gauge his reaction.

"Honey, why didn't you say so?" her husband asked.

"I didn't want to hurt your feelings. I've been givin' them straight to the grandkids for years. I hope you're not mad."

Arthur thoughtfully stroked his chin and smiled to himself before he spoke.

"Well, Gert, I guess I oughta make a confession to you too. That comp'ny went out of business 'bout twenty some odd years ago. That ain't what's been in those boxes." He grinned at his wife with a twinkle in his eye. "I been puttin' cash money in those boxes. The number of dollars for the number of years each Valentine anniversary."

"Well, no wonder the grandkids never complained. They must have thought you were nutty as those almonds, you old coot!"

"Nah! They're honest kids, he said with a chuckle. Once they opened the first box that didn't have no candy, they brought the box back and I traded 'em candy for it. Guess they did think I was losin' it come to think of it. I've just been adding money each year and rewrapping the box. I'm guessing 'bout now you've got over $1,500 dollars or more. What say we go somewhere pretty?"

"Anywhere I go with you is pretty," she said leaning in for a kiss. He got that dopey grin from years ago when she'd kissed him then.

They held hands and rocked the evening in.

"So, you wanna go fool around?" she said coyly.

"You betcha!" he said flashing that grin again.


My dad used to say just because there was a little snow on the roof didn't mean there weren't still coals in the fire. You just never know what old couples will get up to once the children have left home.
Pays one point and 2 member cents.