I am a retired Detective Lieutenant from a large suburban police department north of Detroit. I always enjoyed writing. However, until my retirement I never seemed to have the time.

Writing has become a passion for me. Some people golf, run, - more...

A lieutenant spends his 22nd birthday surrounded in Vietnam 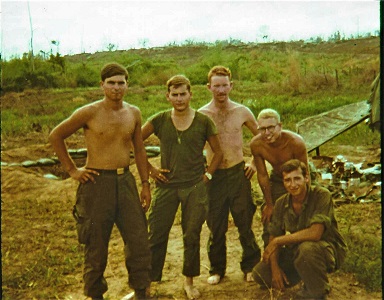 The 25th of April, 1968, was my twenty-second birthday. I have celebrated fifty-three since that one. That birthday will never leave my mind.

The morning of the 25th, they ordered us to take the trail to our north. Charlie and Delta companies would be on each side. Jump off was at 0900hrs. I expressed my concern that my platoon would be in the open.

We only walked a hundred meters when all hell broke loose. Fire was coming from all sides. We had walked into a trap. Before I could even yell to hit the dirt. Our point man and three behind him were killed.

I told Sgt. Curry to get the men and form a circular firing line. I grabbed the field phone from my radio man and advised they cut us off.

The firing was intense. I told the men to go easy on the ammo. Time seemed irrelevant. Before I knew it, the sun was going down.

All I was told on the radio was to sit tight. "No shit, what the hell else could we do."

By nightfall, my platoon of twenty-five was down to fourteen, seven of them wounded. Five of our wounded were together. They had been cut off from us. I heard two of them shouting they were wounded. That was followed by short bursts from AK47s.

I got on the radio and shouted, "The bastards are killing my wounded. God damn it, you better get to us before we are all dead."

Just before dawn, we got the word they were coming for us. It was minutes later we heard the sounds of M16's and hand grenades going off.

After an intense thirty minutes. I heard a familiar voice yell, "John, you out there?" I raised my M16, "Over here Mike." It was Lt. Mike Barry.

"Looks like you had a hell of a birthday, John."

I could have kissed him. We owed our lives to him and twelve volunteers.

Out of twenty-five soldiers. We walked out with seven and two wounded. There were sixteen KIAs. Of that, the NVA had executed seven.

Every birthday, I go to church, say a prayer for those who died and light a candle in their honor.


© Copyright 2022. Richard Frohm All rights reserved.
Richard Frohm has granted FanStory.com, its affiliates and its syndicates non-exclusive rights to display this work.