Hello! I'm here because I want to step out of the box and try new things with my writing, improve my craft, and really push my imagination. I like to write silly, quirky stories and the occasional poem. I also hope to inspire others and help them - more...

She is an accomplished poet and is currently at the #38 spot on the rankings. 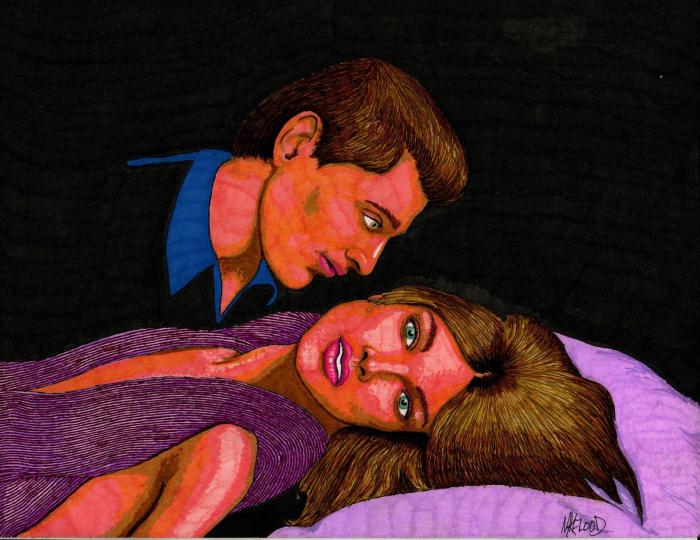 The guest in room three was on my list tonight.

I watched her through a hidden camera- her beautiful swan-like neck so inviting. Intimate parts of me tingled as I imagined wrapping my own fingers around it. I, too, want to feel her excitement pulse through her thick jugular veins, squeeze her tight, then right before she passes out, kiss her passionately, the way he does.

I never had a neck like that. I was never compared to a swan, always a cow or a pig, not that there's anything wrong with those animals, if you ARE those animals. But I am not those things.

The woman set her phone down on the nightstand, smiling after sending a text to her lover. I know this because that's why she's here- to meet him, as they usually do on the second Thursday of every month.

As always, she arrives first, chills the champagne in a bucket full of ice, lights some candles and incense- the cheap stuff you get at novelty stores that give you a headache- then puts on some soft rock. This time it's Van Morrison- she usually goes with jazz, his favorite, or oldies. But tonight must be about her.

Tonight is definitely about her.

Earlier, as I smoothed the bed's soft white linens, I added some romantic finishing touches- dark chocolate covered cherries wrapped in foil, along with two roses- one black, one red, plump and soft, the thorns still intact on the stem. They smell divine, the petals are as soft as butter. I only grow the best.

She fingers the chocolates, "Special Dark," the label says. She unwraps one and slowly brings it past her parted lips, licking the melted remains from her thumb and forefinger. She closes her eyes, and sways to "Moondance" as she savors the sweet liquid on her taste buds.

There's a knock at the door. She opens it stumbling, giddy and childlike, handing him a champagne flute filled with crisp, cheery bubbles. She tries to pop a piece of chocolate in his mouth, but he doesn't take it, he hates chocolate. He takes her lips instead.

I can see he's rock hard, probably from the massive amounts of teasing he's endured all day, sexy messages and nude photos. She finally lets him through the door as they interlock fingers, their tongues dancing the same rhythm as their feet, sipping champagne, more kissing, more caressing.

She moans, a breath escapes into his ear before collapsing to the floor.

He shakes her shoulders and rubs her sternum, screams her name but she doesn't open her eyes. He checks for a pulse on that beautiful swan-like neck.

I know what I've done.

My husband never saw it coming.


© Copyright 2022. VJWild All rights reserved.
VJWild has granted FanStory.com, its affiliates and its syndicates non-exclusive rights to display this work.