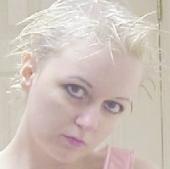 I'm a 36 year old existentialist misanthrope with a cock-eyed, crazy sock monkey named, aptly, Monkey. He's both my love and my evil nemesis. He often humps my male friends' legs while singing "Do Ya Think I'm Sexy?" by Rod Stewart. A clever and witty little chimp, Monkey also has his own advice column ("Ask Monkey!"), which will soon be available again so that you may contact him about your life's plights and plagues via the new and improved version of my website, "GINCHY!" Meanwhile, you may follow the links to find some of his previous "work" for your viewing pleasure.

As for myself: I'm the creator & writer of an indie comic, among many zines of varied content, & a trading card set ("Strangers With Candy"). I'm also an artist, but prefer atypical media, IE: Quad-Cam photography, 3D X-Ray mobiles, mosaics made of pills, re-paint dolls, plush animal taxidermy plaques, crass cross-stitch, etc. My clothing (& jewelry) line, "Schizofrenzy Fashions", catalog will be online soon & select items will be sold through a few sites (such as "Etsy", "Elsewares" & "Fancy Deluxe") which specialize in unique DIY fare. Another project is my one-woman-band ("Hurdygurdy") CD for which I prefer eclectic instruments (accordian, bongos, kazoo, ukulele, zither, tambourine, spoons, water-filled glasses & my voice). A spoken word CD is also in progress. You can find various examples of all of the above endeavors at the following: http://alvastarr.livejournal.com/profile (VERY outdated, but some still applies) or the new version of "GINCHY!" at www.uber-ginchy.com (*Currently Under Construction*)

And if all this information still does not satiate your curiosity, let me just say that I've grabbed David Cassidy's ass. Huzzah!


Advertise With Us
Copyright © 2000 - 2021 FanStory.com. All rights reserved. Terms under which this service is provided to you. Our privacy statement.
top
You Have No Rank
Share 4 posts to be ranked.