RE: Elon Musk-Freedom of Speech Yes, of course you're right. I instinctively know what you mean. I don't need to read it umpteen times because it's incomprehensible gobbledygook. How silly of me.


RE: Elon Musk-Freedom of Speech Well, it will be interesting to see if my woke mate gets back on, then. I doubt it.

What you have to remember is that social media sites, like any other international companies, are still subject to the regulatory bodies of the countries they operate in. There are rules around social media now that have nothing to do with who does or doesn't own it.


RE: Elon Musk-Freedom of Speech I hope your mate gets back on as well Emma...
I hear some of the people working for Twitter
are going to lose their jobs...we'll see what
happens...it will be great to have a social media
form that doesn't censor what is said...


RE: Elon Musk-Freedom of Speech It isn't going to happen, because how Twitter censorship is managed isn't in the control of the owners and that's where you are all making the mistake.

It's a private company, but it's a public forum. What determines what is and isn't permitted on a social media site isn't determined by the owners alone, just like what is produced by any big company that exports isn't solely controlled by the owner. It is subject to the regulations and tastes of whatever country the product is sold in.

And what you get banned for isn't always the reason people think, either.

My woke friend is always getting 30 day bans on Facebook. He thinks it's because he attacks the conservative UK government. It's more likely to be because he puts things up like,
'Boris Johnson is a C**t' and the algorithms block it because he's used the 'C' word.

I see plenty of racist stuff on my Facebook feed (never got into Twitter). It doesn't get taken down because the post creator hasn't used certain words which flag posts up.

And what those trigger words are will vary from country to country.

I have seen plenty of people slate our beloved leader vociferously. They just didn't trigger the bots.


RE: Elon Musk-Freedom of Speech
Message edited:
I'm not particularly keen to raise the Trump bogeyman again, I'd rather he just slid off back into the cesspit from which he came; however, I think we can learn something from the way he was treated by social media.

He was banned and blocked by Facebook, Twitter and probably other platforms. If it was just because he said stuff which was stupid, mean and untrue, I'd have a problem with that sort of censorship. There is such a thing as free speech. But Trump was banned because nearly everything he said was factually incorrect and dangerous. We see that by the over 1,000,000 American victims of Covid and by the rise of militant right-wing groups, culminating (so far) in an insurrection and the lives of public servants being threatened. In the circumstances, such bans can be justified for the greater good.

Trump wasn't banned by any government, Trump WAS the government. Trump was banned by the platform owners. No government can legislate what happens outside its own borders. Media owners can, and do, control what appears on their platform world wide.

We have seen how much power one Rupert Murdoch has in what his empire presents as "truth", and we have seen it dividing and destroying American society, and being instrumental in the rise of right-wing extremism worldwide.

Frankly, I'm concerned at someone like Musk owning such a massive platform, and I don't believe he will just leave his minions to take care of everything and have no influence over what happens at Twitter.


RE: Elon Musk-Freedom of Speech But I still see no end of factually inaccurate and downright dangerous stuff on social media every day.

It only gets banned if a significant number of people complain or the bots get triggered.

Social media isn't like newspapers. You can't control what people say by simply not publishing it. Rupert Murdoch controlled the production of his outlets because he employed writers and broadcasters.
And again, his content was affected by regulations in the country of origin.

Commenters on social media aren't employees, they aren't even paying customers. The owner does not control it in the same way as the traditional media mogul does. Social media is consumer-led. Trump didn't get banned because the owner of Twitter didn't approve of what he said. Trump got banned because the public complained in a large enough volume to trigger a ban. I could say everything he said and still be there because I don't have a big enough profile to trigger mass objection.

The public own social media in an unprecedented manner. BUT there are also regulations relating to content that differ from nation to nation.

I still maintain Musk's impact will change little. Because who owns it doesn't affect the user demographic and affects content far less than regulatory forces and user input.

I doubt very much there will suddenly be an uptick in racist/sexist/homophobic posts. Because they never went away. I see racist stuff on Facebook because I have commented on it. If l hadn't, I could be forgiven for thinking the owners had banned all the racists because I would never see it. White supremacy pages still exist because there's people that want them there. They avoid bans by using language which doesn't trigger the bots and only people who want that content will see it.

Twitter is largely about who you choose to follow. Trump figured a lot because chances were someone you followed followed him. So his words were seen by far more people. A significant number of complaints triggers auto-blocking.

You can't tell me Elon Musk will know everyone who is blocked and why. Most of the content screening is done by the computer. He can demand the filters are changed, but only to a point because again that isn't all under the owner's control.


RE: Elon Musk-Freedom of Speech
Message edited:
Guys -- and by "guys" I mean CD and Steve -- there are different types of ad hominem fallacies. 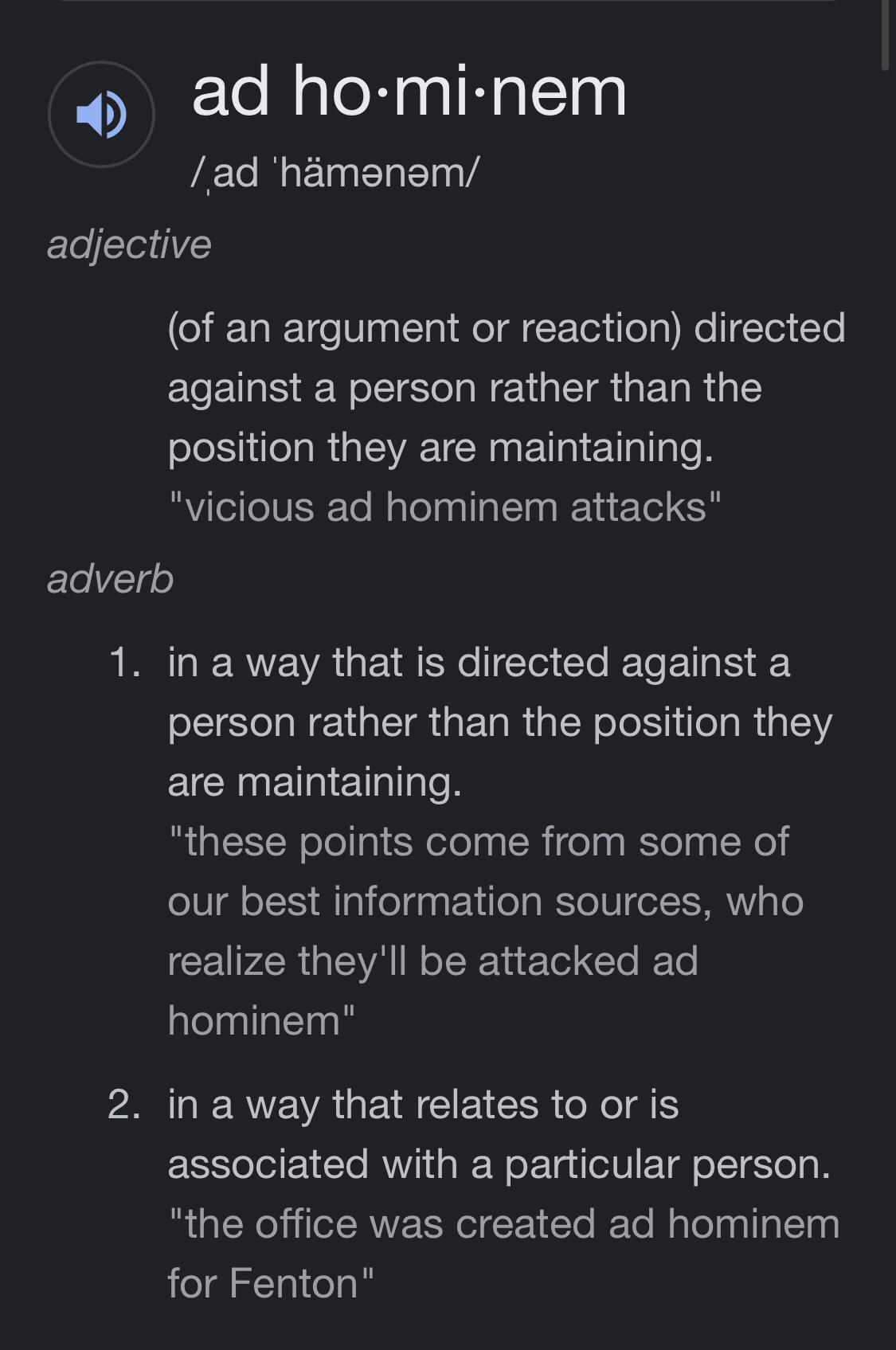 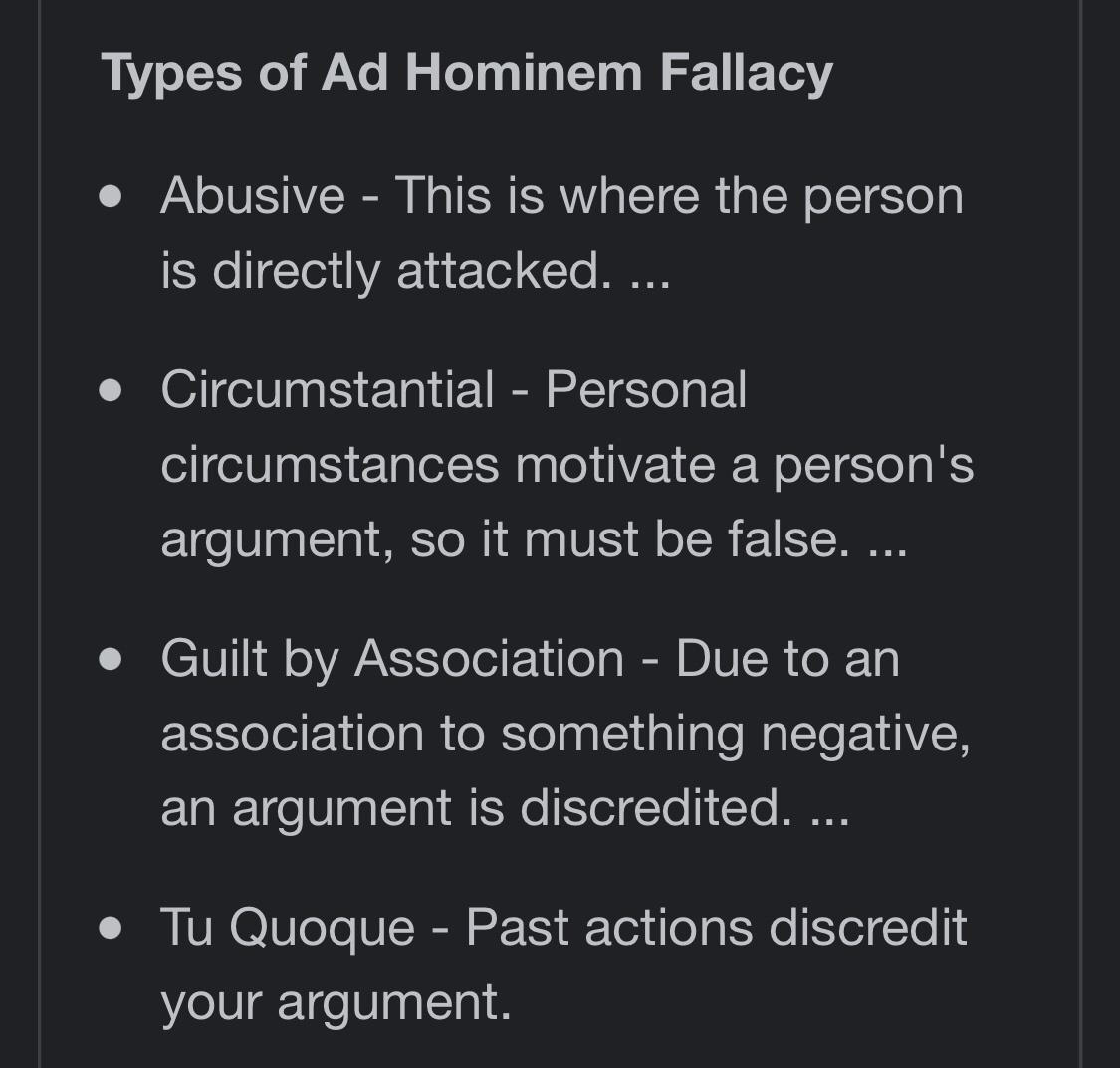 The two types that CD frequently uses in this forum are guilt by association, and converse Tu Quoque.

https://examples.yourdictionary.com/ad-hominem-examples.html (same link as above, so everyone can see the source).

Time Magazine labeled Adolph Hitler Man of the Year in 1938, so it's fitting they should give the Musk worm the same accolade.

This is an ad hominem fallacy of guilt by association. CD hasn't made any logical argument for Musk and Hitler being in the same camp; he just doesn't like that Musk has more influence/money than he does, or maybe he dislikes that someone his enemies respect succeeded at something, so he invokes Godwin's Law. It is hilarious and childish. It's as if I pointed out that Biden and Hitler have both been on the cover of Time Magazine as a way to attack Biden. 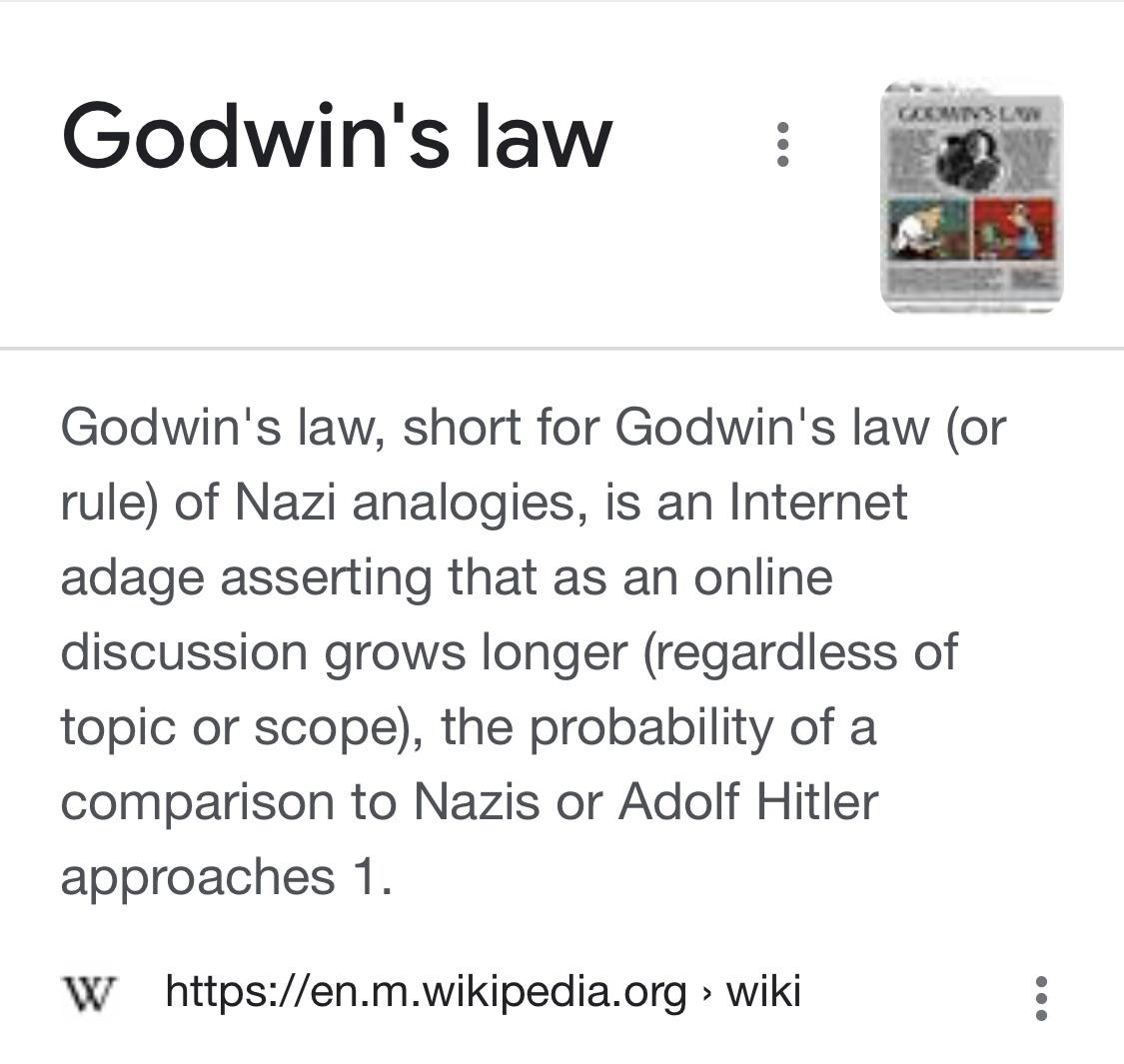 The second type of ad hominem fallacy CD frequently uses is "oh, you think this, you must also eat babies". (See what I did there? That's hyperbole). Instead of just arguing that past actions discredit one's argument, CD likes to argue that parallel or future actions/associations discredit his opponent. Instead of A therefore B, it is B therefore extreme A. That's why I call it converse Tu Quoque. Maybe there is a better term for it. Anyway it's a form of hyperbole, and belittling. It's a cheap and unsportsmanlike form of transparent baiting.

Examples (some of these fit better than others):
-If you're OK with the duplicity of those who refer to "creepy Joe Biden", I'm not.
-Better tell me what faith you belong to (Steve quote)
-perhaps you should join some right-wing insurrectionist or anti-vaxxer group?
-Try going back and reading those comments again, now that you are sober.
-Sorry to offend, Mr Kersey.
-Like Candace Owens? (In response to an attack on Kamala Harris' competency to run for President)

The reason Harambe has been calling this out all over the forum is because it's very clear that there is a bully here, but the far right on this forum is totally inarticulate in calling it out, so he gets away with it. Harambe just punched that bully in the face. Let's see if he gets back off the mat from a gorilla punch, or if he'll just keep keeping yelling personal insults from the floor while basking in the divinity of his superior intellect, while poorly strumming his ukelele, or whatever that instrument in his profile is. What sort of arguments do you expect from an old man who can barely play a ukulele? See, that's ad hominem. It's why Harambe doesn't use it, with the exception of the above example. Now, it is time for Harambe to go mow the lawn and get ready for work.


RE: Elon Musk-Freedom of Speech It's a shame you wasted so much energy on a rubbish argument, Harambe. Like your slightly less articulate friends, you suffer from a serious case of Dunning-Kruger effect.

Firstly, let me remind you it wasn't me who made the association between Hitler and Trump, it was Time. And clearly, for the umpteenth time, the only thing I have said in relation to that is both those men must satisfy whatever criteria it is Time has to award someone "person of the year". More than that, I have not said, which makes your repeated claims not only a straw man, but a lie.

"CD likes to argue that parallel or future actions/associations discredit his opponent".

Evidence? Or is it yet another of your delusional rantings?

I might be an old man, but that just means I've been around long enough not to be intimidated by a puffed-up juvenile pretender. You might impress yourself running around beating your chest claiming "victory", but really, you're just imitating a couple of other people here who have never won an argument in the years they have been here. You look set to emulate them -- congratulations.

You refer to bullying. Firstly, I'm not the one who has for a few weeks now been stalking you around these threads, attempting to pick fights. You don't interest me enough to bother.

Take a good look at your last post, and particularly the closing paragraph, and tell me who the bully is.

I'm not sure what it is I must have said to you at some point to provoke this ridiculous dummy-spit, but if you don't pull your head in, I'll just ignore you altogether, which, I am willing to concede would have been the most appropriate response some time ago.


RE: Elon Musk-Freedom of Speech I'll give you the last word, by once more repeating your original quote:

Time Magazine labeled Adolph Hitler Man of the Year in 1938, so it's fitting they should give the Musk worm the same accolade.


RE: Elon Musk-Freedom of Speech Exactly. Now that you've demonstrated your rant was exactly much ado about nothing, perhaps you'll go away?


Breath of War
Musings from a mental image.