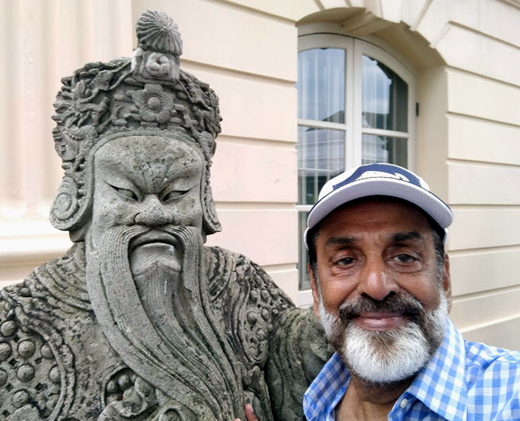 He is an accomplished novelist and is currently at the #86 spot on the rankings.

He is also an active reviewer and is holding the #93 spot on the top ranked reviewer list.

A tough day in my life

It was the year 1983. The hottest month that Mumbai experiences in May, with the maximum temperature of 36 Ã???Ã??Ã?Â°C and minimum of 29 Ã???Ã??Ã?Â°C. There is some relief when the chill sea breezes blow across the city. Monsoon typically begins in June after a scorching summer. The city experiences thunderstorms and windy conditions.

I was mulling my strategy to beat the heat and rains while travelling to my downtown office. I was worried about my imminent transfer to Poona, the neighbhouring industrial city. Leaving Bombay was a strict no-no for me as I was recently posted from Bangalore down South India. And I liked Bombay!

My boss, Vinay Garg, was sitting on the edge of his chair at the table, bent over the business section of the pink newspaper.

"Now listen to me, Sesha," he said. "See here, read this marketing report from the industry experts."

He stood up and bent forward. "There is so much scope to improve our business. Unfortunately, our man in Pune, Mr.Sawant, who calls himself an expert, doesn't think so. I think he is a misfit. Read his report" He threw the file at me.

"If we follow his advice, we may have to close our business in the West India despite many business opportunities coming our way. I couldn't answer to my conscience if I did."

"Sir, please do not transfer me now," I pleaded. "Am I not being productive and even covering Sawant's shortfalls? I will take care of it by making frequent visits to our office in Poona".

My pleading softened Garg's heart. He proceeded to bellow his orders "Take the first available bus to Pune and relieve Sawant of his duties immediately. We will talk about your assignment after you return."

I thanked him profusely and left the office with a smile on my face. I remembered my mother saying, "If you manage to duck a swinging club, you will live for one hundred years."

The clock at the bus stand read 6 AM as I stepped out of the taxi. All train tickets had been sold out. The ominous dark rain clouds ensured the sun wouldn't appear that day. The heat and humidity that precedes a downpour made it difficult for him to breathe.

The breeze felt like a demon's breath because of the piles of trash strewn all over the streets. Blown by the wind, they rolled down to all available empty places. "What filth!... Ugh. Is the civic body still sleeping? Shame on them! Shame on the people who dirty the city!" he thought angrily.
The massive old bus finally arrived. I could hear it rattling as it negotiated the corner bend. The bus stopped with a screeching noise. The doors opened with a jerk and a hiss. What happened next was the least expected. I stood there stunned as hordes of perspiring people started boarding the bus from all directions and filling out the empty spaces inside quickly. I reached the door handle and desperately tried to climb in.

Suddenly I was pulled right back in a solid jerk and about to fall on my back. As I was trying to grapple with the handle and the person in front of me, I noticed the culprit was a fat lady staring at me accusingly and holding me tight in one place. I couldn't move or breathe. I groaned as I was hanging dangerously from the bus. The fat lady didn't lose her tight grip on my shoulder and allowed all the women accompanying her to rush right in with no concern whatsoever to other passengers. The fat lady seemed to have a kind heart. Once her friends were in, she dragged me inside with great flourish.

"This hostile action was uncalled for," I thought to myself, biting my tongue. But good sense prevailed on me after seeing my adversary and her friends.
I felt blissful when I found a seat to occupy, although it was right smack behind the driver. People had occupied all other seats. I pulled my legs back to avoid being trampled upon by the unruly crowd.

It was half-past six, and the sidewalk thermometer read 32degrees Celsius.
"But it can't be showing the right temperature," I frowned. The civic council was notorious for buying substandard items. I was positive it was at least 40 degrees inside the illegally crowded tin-pot.

At last, the bus started moving, and the breeze brought some relief to the passengers. At each bus stop, I began pleading to a higher power to stop people from coming in -- as a pious devotee. Of course, it appeared that the 'Big Man up there' did not hear me. I laughed at myself at the absurdity of my plea. I felt that even God was helpless in such a situation.
Then the rain gods decided to flood the city with a downpour. Fortunately, it helped the temperature to dip slightly.

My seat was behind the driver, and I braced myself for a roller-coaster ride as soon as the bus hit the highway. I firmly held on to the bar in front of me. Sweat dripped down my armpits and dampened my shirt. The air could not circulate inside the bus as all windows were closed to prevent rainwater seeping in.

"Ticket please," I heard the conductor and gave him a high denomination currency note.
"What? No change?" The bus-conductor stared at me indignantly.. The first despair-induced confrontation in a dialogue between a passenger and the bus-conductor had begun.

"Didn't you see the board which says 'Tender exact change'?" The conductor questioned angrily. I shook my head. "People pushed me around. And in the melee, I didn't see any board. In any case, I don't have exact change."

"If he doesn't have exact change, we can drop him off here," said the ill-mannered driver looking back. The bus had stopped at the next bus stop.

"Why not? Just wait and see" replied the angry driver.

"NO!" I raised his voice "This lousy bus is already crowded with people jamming the exit, and I cannot to get out." I explained.

After such a claim, it was impossible to deny that I was wrong. The bus driver started the bus. The conductor said in a condescending tone. "Wait here. Please give me that money. I will come back with change after attending to other passengers."

He soon found his way to the front after tripping a couple of times and stepping on the toes of the fat lady who let out a few choicest expletives in the local language. Returning some curses to the fat lady, he reached me before she could react and gave me the change grudgingly. The bus stopped at the next bus stop, and a couple of passengers got out with relief all over their faces. The conductor freed the way for a few people that wanted to board the damned public bus. And the trip continued.

The heat continued to vent through the bus, resembling a gruesome laugh of a demon. Groans were coming from some passengers. The rain stopped as suddenly as it started and people quickly opened the windows. The groans stopped.

When I thought things could not get worse, I looked out the window and panicked. There were half a dozen fisherwomen carrying fish in large baskets and trying to get into the already overcrowded bus. They were trying to get in from the front, which was the exit. When the conductor went to stop them from getting in, they aggressively pushed the poor fellow aside before he could open his mouth and squeezed themselves.
They sat down on the floor right in front of me blocking the passageway and the exit. "We are getting off at the next village," they fumed. "Who do you think you are to stop us. Are you the owner of this bus?" The bus conductor couldn't find his voice.

Appalled, I observed them wiping the sweat running down their foreheads. They placed the baskets next to me and gave me a disdainful stare. The unbearable stench of the fish was overpowering. I took out his hanky and covered my nose.

Each movement of the rocking bus threw a fish on the my lap! Soon I became an expert in catching the fish and threw it back into the basket. The fisherwoman seated on the floor next to me held on to the seat bar with one hand. And with practised precision, she held the fish basket with the other. And all the time giving hostile looks to me.

"Do you want me to hold the basket?" I asked with a fake smile.

"I don't mind it if your hands are clean" quipped the woman. "You city guys don't know how to handle fish. You will spoil the fish."

I was tongue-tied and decided not to get into any verbal dual with her. There was not a single seat free at the back for me to switch and escape from the smelly ordeal.

The fisherwoman went on, staring at me. I avoided her stare and looked out of the window. Suddenly I saw the familiar sight of Pune city's suburbs. The city centre was only a few miles away, and very soon this torture would be over. But all of a sudden, I felt tremors in my tummy. I jumped from my seat and shouted at the driver, "Help! Stop the bus!"

The bus driver was taken aback and slammed his foot on the brakes. This sudden stopping of the bus threw everyone off their seats, and passengers who were standing fell on each other. The bus-conductor fell on the fish basket, his face into the fish. The fat lady let out a tremendous shriek. Before anyone could make out what was happening, I grabbed my bag and jumped out of the bus. I ran fast towards the nearby field with tall grass.

The bus left, leaving me behind.

Later I got to my room and thanked my lucky stars for being alive after the 150 km drive covered in five hours in torturous conditions.

"What a forgettable bus journey it had turned out to be!" I rued. But on the positive side, it made me sort out the problems my company was facing, resolve all the pending issues and bring the business back on track. My boss was pleased and agreed to retain me in Bombay.(later renamed Mumbai).

A hard day in my life.
Pays one point and 2 member cents.