She is an accomplished novelist and is currently at the #89 spot on the rankings.

Where were all the door stops? 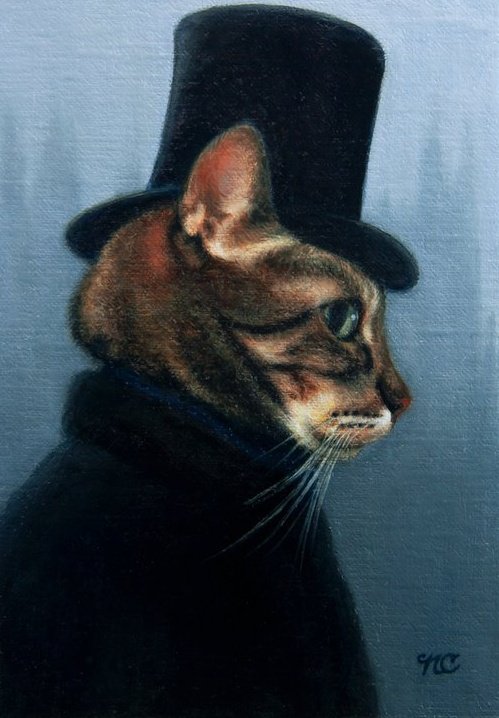 Bang! Bang! The wooden door was caught in the draught and slammed again. Felix, asleep in the armchair nearest the heater stirred and opened one sleepy green eye .
."That door shouldn't slam," he told himself, "'cos Mum put a door stop there to prevent it." His eyes closed, but the door slammed again and woke him up .
He looked across to Tiki, fast asleep in a mound of blankets right next to the heater. "Hmm" thought Felix, "Usually loud noises wake him up. I wonder if he's really asleep or just playing possum."
He slid off the chair and went to Tiki's side, but before he could put a gentle paw on his little mate to wake him, Tiki's yellow eyes opened and he yawned loudly in Felix's face. "Wassamatter chum?" asked Tiki.

Felix noticed how Tiki tucked all his blankets in around him as if he was hiding something, but decided it was just because it was a chilly morning and Tiki felt the cold.
The door banged again and the two cats heard Mum come down the passage. She closed the door properly and went back to bed.
She slept in a big bed with Daddy.
Sometimes if the wind was blowing outside and making strange noises, or if they'd had bad dreams, the two cats would come up to the bedroom and get under the covers to sleep.
Occasionally there would be a small boy snuggled into Mum's arms.
On Sunday mornings there would be The Baby fast asleep between Mum and Daddy. Somehow there was always room for one or two more and both the cats knew they were always welcome.
They followed Mum up the passage and climbed onto the bed. Nobody else there. Goodie!

They settled down to sleep, but then a noise from the nursery next door told of The Baby waking, so Mum got out of bed and dressed.
She went into the nursery and returned with a bundle of gurgling baby in her arms.
She put a dry nappy on The Baby and then laid him alongside Daddy while she went down to the kitchen . She fed the cats and made coffee, taking a cup to Daddy.
" I thought you put a door stop against that door last night," said Daddy.
Mum sipped her coffee thoughtfully.She had already investigated the slamming door and found the little rubber doorstop was nowhere to be seen.
"I did," she answered, " but the thing seems to have vanished into thin air." Daddy shook his head, " Well that's very strange,"he said, and went on drinking his coffee.
Later on that day Mum went to the shops and bought a few more rubber door stops to fix the middle door so it wouldn't slam and disturb The Baby's peaceful sleep.

All was well for an hour or so when a terrific crash brought Mum and Daddy to the laundry.

The door was slamming again and there was no sign of the small rubber chock that Mum had placed there to keep the door open.
Felix was puzzled. He thought back to what he had seen just before the door crashed shut.
Tiki had run into the sitting room and dropped something onto his bedding. Felix slipped down from his position on the window sill and went to look.
Tiki growled at him and tucked his blankets in all around .Mum noticed and watched, laughing, while the two cats sat back on their haunches and had a boxing match.
It was unusual for Felix to pester Tiki like that, but then she realized there was probably good reason.
Mum called to Daddy. " Come here darling. There's something going on with the two cats."

Daddy came in and saw the two still boxing on. He picked Tiki up which the little black and white cat didn't like at all and meowed furiously to be put down.

As soon as Tiki was out of reach Felix ran to his bedding and fossicked in the folds of blankets for what he believed was hidden there!!
Sure enough ! Not one .Not two. Not three, but four rubber door stops were tucked into Tiki's blankets.
The fourth one was blue. Just the same as the one Mum had put under the laundry door that morning.
Tiki was furious.They were small and mouse like in shape and the rubber had a nice chewy texture. He had decided to keep them all in his bed for safe keeping.
After all, you never knew when you might need something to play with and these little thingamabobs were perfect.

"Well, that has solved the mystery of the missing door stops," said Mum to Daddy.

She was smiling as she spoke, so Tiki ventured a quick smooge around the ankles.
He looked up at her with his big yellow eyes and arched his back in an endearing display of affection.

Mum picked him up and stroked his little bent back, a legacy of rickets as a kitten.

"There was some cooked whiting in the fridge" thought Felix, " Perhaps as a boon? All in the name of good relations between a clever cat and his mistress."

Mum also remembered the delicious cooked fish and gave them each a large saucer filled to the edges with delectable cooked whiting.
Tiki got his to make up for Mum taking all but one of the door stops away and Felix got his for the brilliant sleuthing he had used to discover the answer to the question " Where were all the door stops?"


This is a true story. There was a door in the house which would slam repeatedly without shutting properly. For a time every door stop I put to keep the door open at night would mysteriously vanish. It took Felix to show me who the culprit was.
Tiki loved anything made of rubber. He would chew on it, drooling blissfully. He was the first cat that I ever had and loved my baby son to bits. If he cried Tiki would be at the nursery door anxiously waiting for me to "DO Something". He lived for ten years, but when he became sick the vet said as he wasn't very strong, he felt it was kinder to "let him go". So we did and now he's in Pussy Heaven waiting for me.
Club entry for the "Fictional Characters" event in "Animal Crackers".  Locate a writing club. Pays one point and 2 member cents.


© Copyright 2020. Cass Carlton All rights reserved.
Cass Carlton has granted FanStory.com, its affiliates and its syndicates non-exclusive rights to display this work.
Don't miss this both by two of our own! A book by Tootie and Commando