He is also an active reviewer and is holding the #62 spot on the top ranked reviewer list.

Janie's baprism to the wild

A chapter in the book Wilderness Redemption Road

Call of the Wild 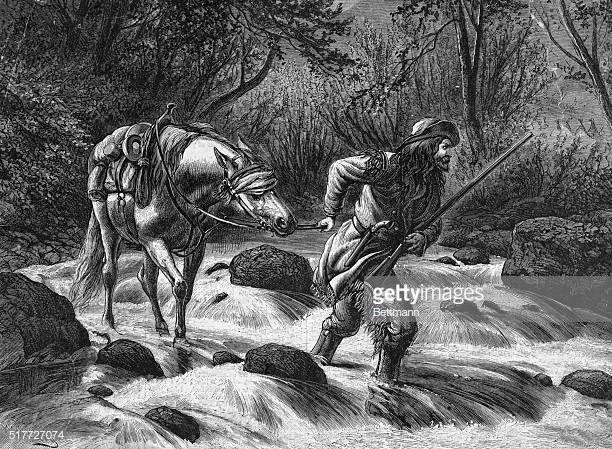 Doo and Clancy guided their mules through the woodlands. They had found a game trail to follow which allowed them to move a lot swifter than as if they were busting brush.

“Do you reckon Smythe’s got them on the move yet?” Clancy asked.

“You left Bear Rogers a mess back there, Hoss.”

“I have no clue what that was about, all I know is I hurt somethin’ awful,” Doo replied.

Mighty Beaver had been half listening to the conversation, but decided to interject.

“You should have killed him Doolittle, a man like that will keep coming after you until one of you is dead,”

“Thunderation! Killing a man ain’t my idea of a good way to start a trip.”

“Still, you will be seeing him again.”

This fouled Doo’s outlook even more. He didn’t say anything, just concentrated on the trail.

“Something ain’t right about this excursion,” Doo thought.

A twig snapped and the usual bird and all normal forest noises ceased.
The party froze.

They were all searching the direction from where the sound came from. Even though they were still relatively close to Pittsburgh it wasn’t unheard of to run into a band of Shawnees.

“What was that?” Janie asked.

At that moment a whitetail buck entered a clearing to the party’s right. Doo lifted his rifle to take aim, but Clancy grasped his arm stopping the motion.

With his head Clancy motioned for Janie to take the shot. Doo nodded and looked at Janie, he pointed to her, then the deer.

She raised her rifle up to aim. Her heart was beating so fast she swore it would alert the buck. Her mouth went dry and sweat flooded down her forehead into her eyes.

She wiped her eyes and aimed at the deer which was presenting its full side to her. She aimed right behind the shoulder.

Janie pulled the hammer back to full cock as quietly as she could. The deer didn’t seem to notice the audible “click.”

She checked her aim one more time, then squeezed the trigger. When the rifle went off it surprised her. The kick of the weapon and the cloud of smoke which enveloped her made her lose sight of her quarry.

“You got him! Good shot girl! Clancy shouted.

Janie was still choking from the powder smoke, but still able to give a grin.

“Yeah, you never know who may have heard the shot and come to check it out,” Clancy said.

“And in the case it’s a war party an empty rifle is as useless as teats on a boar hog,” Doo added.

Janie went about loading, measuring out the powder into the barrel, she then took a piece of wadding and wrapped it around the bullet and placed it in the barrel. She then used her ramrod to drive it home.

“Don’t forget the pan, Little One.”

Janie’s face flushed because she had. She poured some powder into the priming pan then flipped the lock shut. Little Beaver gave her a nod of approval and she grinned.

While she’d been reloading, Clancy and Doo had walked to the deer and were about to begin dressing it, but Mighty Beaver stopped them.

“This is not your deer, it is Little One’s,” Mighty Beaver said. “She needs to give thanks.”

Both of them were familiar with giving thanks to the Great Spirit sending them game, they stepped back.

“Kneel down and place your hand on the deer,” Mighty Beaver said.

Janie did as she was told.

“Now you must thank the Great Spirit for sending us this deer and thank the deer’s spirit for feeding us.”

“This is a lot of rigmarole to get to eat lunch,” Janie thought, but she didn’t want to offend Mighty Beaver.

Mighty Beaver smiled as the girl closed her eyes and whispered something he couldn’t hear.
Janie finished then stood up.

“You are now a hunter, Little One, and your first deer’s spirit will guide you in future hunts.”

“Not quite yet,” Clancy said.

Doo bent over the deer, found the jugular, and stuck it so it could bleed out. Clancy rolled it up on its back and made a small puncture cut around the deer’s butt hole.

He then made a cut up the midline ensuring he didn’t puncture the intestines. He cut through the diaphragm and windpipe then pulled the organs out easily. He separated the liver out then offered it to Janie.

“Take a chaw of this, it will give you the spirit of the deer,” Clancy said.

Janie eyed the bloody hunk. Her stomach rebelled. She was about to refuse, but Mighty Beaver put a hand on her shoulder. It calmed her.

Janie took the liver from Clancy, brought it to her mouth and took a bite. As blood dripped down her chin she chewed.

“This isn’t half bad,” She thought.

She took another bite.

“Here now, you don’t have to eat the whole thing,” Clancy said as he put his hand out for the liver.

Janie handed it back to Clancy, who took a huge bite. He then offered it to Doo, who took another huge bite and watched the blood trickle into his beard.

Doo then offered the liver to Mighty Beaver, who accepted it, took a bite, and handed it back to Janie.

“Finish it, Little One.”

Which Janie did with relish.


“Well now we’ve had our snack, load the deer and let’s get back on the road again,” Clancy said.
Shawnee Town along Raccoon Creek

Tyler McGraw was growing concerned. They had delivered Smythe’s rifles over a week ago, yet the Shawnee were holding him and his crew.

The white men had been given a longhouse to themselves and had been provided an old squaw with nubs for teeth to cook for them, there was an ever cooking pot of stew on the fire that they were free to eat from.
For McGraw, he couldn’t see any reason for them to hang around the Shawnee town, Smythe had also been explicit, he wanted the crew who had helped him transport the rifles to disappear and not return to Pittsburgh.

“I’m going to see what’s going on,” he thought.

“What do you want, white man?”

“I was wondering when you were going to let me and my men leave.”

“They are free to leave whenever they wish, you must stay.”

“I need you to speak in the white tongue when the others arrive, the rifles are only part of what we were promised.”

“No, you are considered a guest, you will not come to any harm while you are with us.”

This did little to soothe McGraw’s already frazzled nerves.

“What else were you promised?”

“You do not need to know that at this time, just know we will not be pleased if your chief doesn’t deliver what he promised us.”

This broke McGraw out in a sweat. He didn’t know if he could trust Smythe or not. If he didn’t deliver he hoped he’d get a shot at that ferret-faced weasel before the Shawnees put him under.

“It will not be long, we expect your chief before the new moon.”
“I hope Smythe gets here sooner than that.” McGraw thought. “A whole lot sooner.”


I know it's been awhile since I posted a chapter, it's been a busy summer.
Dialogue in bold and italics is being spoken in Shawnee.
Cast of Characters
Doolittle Carter-Extremely blessed and lucky frontiersman
Janie Wolfe-Heroine, wise beyond her years, intuitive, follows her instincts
Swooping Eagle= Shawnee Warrior, vengeful but listens to the voice of reason
Mighty Beaver- Delaware Warrior, funny sense of humor
Clancy Sinclair-Happy -go-lucky friend of Doolittle
Godfrey Smythe- Ferret faced cad


© Copyright 2020. Earl Corp All rights reserved.
Earl Corp has granted FanStory.com, its affiliates and its syndicates non-exclusive rights to display this work.
Don't miss this both by two of our own! A book by Tootie and Commando