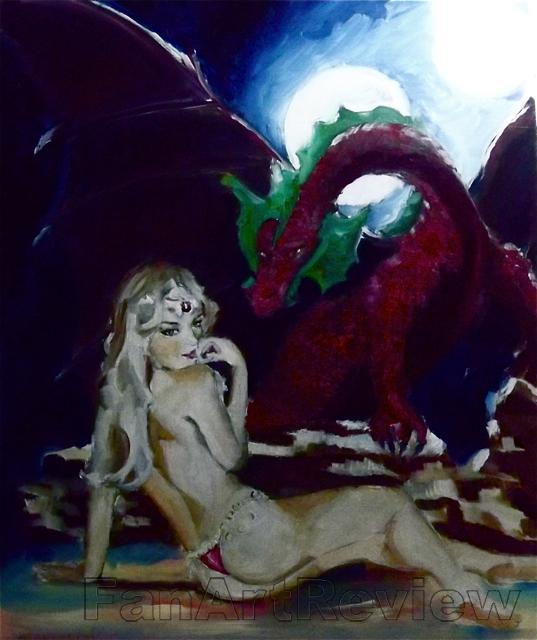 Aaron lay staring at the ceiling, pondering what to do next. He knew that the people who said he knew nothing about being king weren't entirely wrong. He'd have to figure it out, and fast. Winter was coming, and if people were not fed, the ones who could leave would go, and the rest would riot. His predecessor had taxed the kingdom to its limit, and the people had nothing left.

The dragons, not used to being idle in the daytime, were growing restless. Aaron woke Duane, and suggested he take them to the stables to catch mice before they destroyed the room. Alone, he wandered through the palace, taking in his new surroundings.

"You!" A shrill voice penetrated his reverie.

"You have no business being here. I should be queen!" she shouted. She tore into him, insulting him with words more suited to a drunken sailor than a princess. Nearing the end of her unbecoming tirade, exhausted, she used the last of her energy to shriek at him some more.

"I know you're a fraud! That fish we had for dinner last night cost more than this dress. Did you think I wouldn't know? I've had it twice before. There's nothing wrong with the kingdom. There's plenty, and you're letting us go hungry!" She stormed off, back to her own apartment.

Aaron's head was beginning to ache, but he had an idea. He called for a meeting with the former king's adviser, several traders, and the cook who had prepared the fish. He had no idea what kind of fish had been served last night, and he needed to find out.

With everyone assembled, he shared the one useful piece of information the princess had given him.

"It's called tuna," said the cook. "I doubt it costs as much as the princess's dress, but it is expensive. I was surprised to see it."

"Do we have something of value to trade?" Aaron asked.

"Indeed we do," the men agreed.

The new king could see the relief in their faces. It was clear to him that these men had seen the problem, and been helpless to do anything about it.

"I'm going to need some smart people around if I'm going to get things sorted out," he said. "Can I count on you?"

They stared at him as though he had suddenly sprouted another head.

"You could use those dragons to take whatever you want," said the adviser to the former king.

"I could. It might work for a short time, but the kingdoms would soon unite against us. I don't believe I've been entrusted with the dragons to get them killed. Besides, it's peace and prosperity I want for the kingdom, not war."

"I think Aaron, I mean His Majesty, is right," said one of the traders. "We don't have the resources for a war. We need food and supplies right now. We can't live on fish all winter. We need allies, not enemies. Give me a few of those fish, and I'll see what I can get for them."

"I want to hear all options," Aaron told him. "Say what's on your mind. I need to know what's going on, and what people are thinking."

It was decided. The princess had unwittingly given Aaron what he needed to set them on the road to success.

The sun was setting, and Brown crawled out from her nest under the quilts. Finding herself alone and a little disoriented, she flew around looking for company. In a room a little way down the corridor, she found a human lying in a tub of warm, sweetly scented water. Brown had never seen a bathtub before, and she was curious. She perched on the side of the tub, where the human relaxed with her eyes closed. She dipped a clawed foot into the water. It was so warm and smelled so delicious, and before she could think, she found herself diving in.

The human screamed. She thrashed around in the tub, sending water in all directions, at once lashing out at the dragon and trying to get away from her.

Brown had never seen a human behave like that before. She climbed to the edge of the tub, staring at her. She watched as the human continued screaming until the lady's maid rushed into the room with a broom. Screaming, she swung at the dragon, who landed back in the tub. The human in the tub kicked and thrashed, screaming more. Now terrified, Brown scrambled out and flew to a high shelf, letting out frightened squawks.

Her squawks immediately attracted the attention of her siblings, who rushed to her rescue. The maid panicked, swinging her broom in all directions, nearly hitting Black. Black blew a plume of flame at it, setting its straw on fire. In her panic, the poor lady swung the flaming broom at the dragons a few times, then decided to douse the flames in the tub.

The wet human flung herself out of the tub, ran for her bed and dashed under the covers, still screaming.

Duane, who had followed the dragons as best he could when they had all suddenly taken off, arrived just in time to see Pink, decked out in her favorite glamour, confronting a terrified woman holding the remains of a broom. Confronted with what appeared to be a large, flame colored dragon, she dropped to the floor in a dead faint. He shouted for Aaron.

Now that the perceived danger passed, the dragons were checking out the bathtub. Warm, scented water was a novelty for all of them. With the exception of Brown, who still crouched on the shelf in terror, they were splashing it all around the room. Aaron arrived and lifted the unconscious woman to the bed, causing a new chorus of screams.

Aaron immediately ordered Duane and the dragons out of the room and sent for a nurse to see to the women.

Back in his own room, with Brown clinging to his chest, he demanded to know what had happened.

"She was hurting Brown," said Pink.

For her part, Brown had no idea what had happened. The human in the water had simply gone crazy. She didn't know why.

Slowly, Aaron was able to piece things together. Brown had not meant to frighten the woman in the tub, and when the maid had frightened Brown, her siblings thought she was in danger and rushed to help her. The only question was what to do now.

"She wants to go home," said Pink. "She doesn't like it here any more."

"You can't go back to the cabin right now," Aaron told Brown, but perhaps you could visit Purple for a couple of days. Would you like that? I bet Purple would."

"Sky could help you pop over to see her, and I'll have a couple of days to figure out what to do. You'll be okay. I don't believe you'll be jumping into bathtubs with strange humans again."

The dragons gathered round on the bed.

"If things around here get to be too much, and you need to get away for a while, it's okay if you want to go see Purple. Please let me know so I'm not worrying that some crazy woman with a broom has managed to drown you, and do not go to the cabin."

Mountain and Yellow snuggled next to Aaron as Sky vanished with Brown. They all knew life was changing. The human world was not the best place for dragons.


© Copyright 2021. Cindy Warren All rights reserved.
Cindy Warren has granted FanStory.com, its affiliates and its syndicates non-exclusive rights to display this work.