She is an accomplished poet and is currently at the #30 spot on the rankings.

She is also an active reviewer and is holding the #19 spot on the top ranked reviewer list.

The search for Clementine continues.

A chapter in the book Double Blind 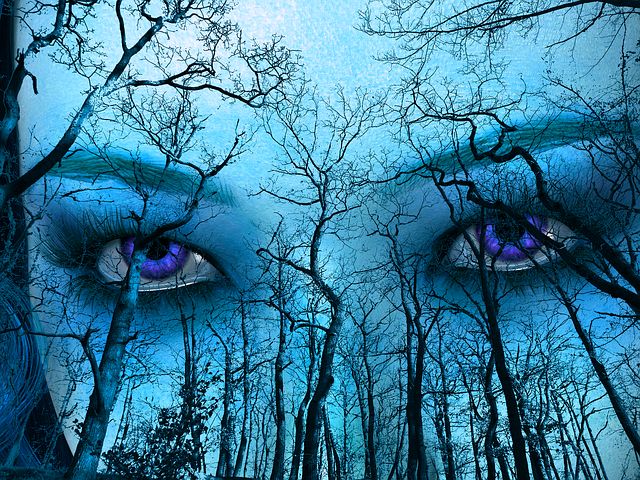 Clementine Jones chastised herself all the way to the bathroom, stopping to gulp down a drink from the faucet. She lifted her petite frame out of the window and was down the tree in no time. Fresh tire tracks were visible for about two miles to the main road where they turned left. Instinctively, she decided to bear right when she saw a rustic sign that read: Thurston's Dry Goods and Down-Home Barbeque - 7 miles east.

Her desperate situation prompted her to stop at the sign and bury the DNA evidence from the ashtray. Hopefully, she could not only escape, but catch the evil man. Tine continued on, thinking it wouldn't be long before she would get help. Still, she saw no one.

Clouds of white smoke appeared in front of her. "That must be where that heavenly smell is coming from," she said, licking her lips. Tine kept out of sight, but stayed close to the dirt road as she headed east, watching for signs of life.

The temperature was warming quickly after the cold start to the day. The freshness of the evergreens enveloped Tine Jones as she trudged along, headed east to the only place she knew--Thurston's Dry Goods and Down-Home Barbecue.

Atop the pines, she sighted a new friend. A bald eagle soared majestically as though it were surveilling her. He was a comforting presence, staying right with her for miles. Only the faintest puffs of clouds were visible against the clear blue skies.

However, her parched throat logged each mile with a complaint.

The morning quiet was disturbed by a distant whine of an engine. She squinted to see a flatbed truck lumbering down the mountain in her direction.

Cursing her impractical boots, she attempted to run towards the road, waving wildly. Surely, they see me!

The truck continued on for about a quarter of a mile, then screeched to a halt.

A red-headed young man dressed in a flannel shirt and well-worn jeans climbed down from the driver's side and walked towards Tine. He picked up his pace to close the gap between them when he saw her distress.

"Help! I've been kidnapped!" Tine dissolved into hysterics. "Do you have a cellphone?"

"I do, but there's not a cell tower for twenty miles, Miss. Thurston's is just up the road and has a landline."

"Is there a forest ranger's station around here?" Tine began to cry even harder, but only a few tears would come.

"Yes, and it's about three miles past Thurston's. Let me get you to my truck and I will drive you."

Dehydration took hold of Tine as she began to shake.

"I don't know you, and I'm not getting into your truck! Uh... no thanks! That's what got me into this mess in the first place."

The young man was an honest one, but she couldn't see it.

"I will continue on this road until I reach the dry goods store. I appreciate your offer, you--handsome--man," she said, slurring her speech. "I'm practically there...."

Bobby DeWoody caught Tine just before she hit the dirt.

Governor Preston Jones was just sitting down for breakfast when the long-awaited call came in.

"Let it ring twice, Governor. It gives us more time to trace the call," said the federal agent.

The governor paused, then took a deep breath and picked up the line. "This conversation is over before it begins until I get verified, time-stamped proof of my daughter's well-being," he said.

"I thought you might say that, Governor," said the obscured voice. "Three million by Wednesday at this time. Before the swap, I'll send you a live video of Tine along with the wire transfer account number. The location is a bit rustic, so it's easy to see if you are traveling alone. My friends will be watching from the crow's nest. I'll be in touch." Click.

Preston Jones was swarmed by Trisha and Chloe. "We'll get Tine back... we will!" Deep emotions washed over them all.

After a few minutes, the head of the FBI's task force spoke. "We have to move quickly, Governor. It looks like we have pinpointed the region of the call. It's a remote area in the Ozarks, off the grid."

Every agent was on their phone and computer with lightning speed to contact the local and national authorities in Arkansas and the Ozark Plateau. A missing person alert was sent out.

Notice filed February 3, 2020. Missing LSU student, Clementine Adele Jones, age 20, 5 feet 2 inches tall. Miss Jones is approximately 110 pounds with brown hair and blue eyes. At the time of her disappearance from Lafayette Township, she was wearing a white down coat and high-heeled boots. Miss Jones may be traveling with an older gentleman described as having a medium build, graying hair, and blue eyes. The man was thought to be driving a white Lexus SUV. Please contact the Louisiana Bureau of Investigation, or local authorities if you have any information.

"At least we have Clementine's possible whereabouts narrowed down," said the agent in charge. "The exchange will most likely be there; or in the bayou, since that's Louisiana's most remote area."

The governor hurried to make the necessary calls to raise the three million for Clementine's ransom. He knew of a local woman who had just inherited a large sum of money and was hoping to speak to her today, anyway.

He dialed her cell number after speaking briefly with Detective Mike Lembowsky. Fortunately, he knew exactly where she was.

I was pleasantly surprised by the numbers showing up in my self-defense class on this chilly Monday. I tried to keep my focus on helping others, as my heart had already turned towards Clementine Jones and her family. Jackson and I had just been deputized and would be starting on her case today, literally as soon as class was dismissed.

However, none of the Joneses, or their friends that had signed up, were in attendance. I was a little disappointed, as I had hoped to speak with them all personally.

As soon as I wrapped up my class, my cellphone rang. I was stunned to hear the voice of Governor Preston Jones.

"Good morning, Mrs. Law, and welcome to the Lafayette Township Police. I hear you are a consultant."

"Governor, thank you. I'm amazed you have the stamina to think about anything other than Clementine. How may I help?"

The governor hesitated, and I knew it was both emotional and difficult. I spoke first to ease his apprehensions.

"The kidnapper called and demanded money, didn't he? I can imagine it's a large sum. Before you ask, just know I have one million for your immediate use and more forthcoming. My inheritance money continues to trickle in and I have not yet started on the renovations for the Andre Dupree Museum of Art. I'll contact my accountant today," I said reassuringly.

The long pause could not disguise the sobbing at the end of the line. "I don't know what to say other than, thank you, thank you so much, Mrs. Law."

"Aw, your daughter's life is worth much more than that. It's just money, Governor. Detective Mike, Jackson, King, and I are on it. We'll catch this guy."

"I can't wait to thank you all in person, and meet your famous dog!"

"Well, now you've gone and done it. You'll just have to invite us over for dinner!"

"How about tonight? As you can imagine, we are housebound, and your company would be more than a welcome relief."

"Done. We have to work at Louie's Diner all afternoon, gathering evidence and interviewing the staff. Louie Ray feeds us like we are his long lost relatives. May we bring you all some supper?"

"Okay, that would be wonderful," said the governor. "We have lemon poke cake still sitting here untouched."

The sign was as big as life and seemed to interrupt all natural beauty in the Ozark foothills.

"One Stop Car Shop, where you can buy, sell, or trade up. It's easy! We finance with zero down. Easy is debatable," said the career criminal.

Hours later, he was finally rid of the white Lexus SUV and driving something more... culturally appropriate: a Ford pickup in godforsaken red. It was the easiest and fastest deal, so he signed on the dotted line for the gas-guzzling eyesore. He had to get a few more things: a John Deere ball cap, food to eat, and a couple of cartons of smokes before heading back to Clementine. I really should feed her and give her something to drink.

"There's a place near here and it had a phone, too. Thurston's. I'll stop there. I just need to figure out which identity I want to use. They'll be looking for Gavin Lovett, most likely. Well, I guess it's back to being Ed Silver for now," he said, without a care.

He pulled over to a scenic lookout and parked. Rummaging through his wallet, he pulled out the stolen driver's license of Louisiana native, Edward Silver, along with his credit cards, voter's registration, and most importantly, Ed's super saver discount card for Piggly Wiggly supermarket.

"Poor, dear Ed, " he said with an impish grin. He returned to hazel eyes with colored contacts and restyled his graying hair with a side part. "Yes, I'll certainly need to get a box of men's hair color at Thurston's."


Book of the Month contest entry
Pays one point and 2 member cents.

Advertise With Us
I Remember Love
There are so many ways that love is manifested.