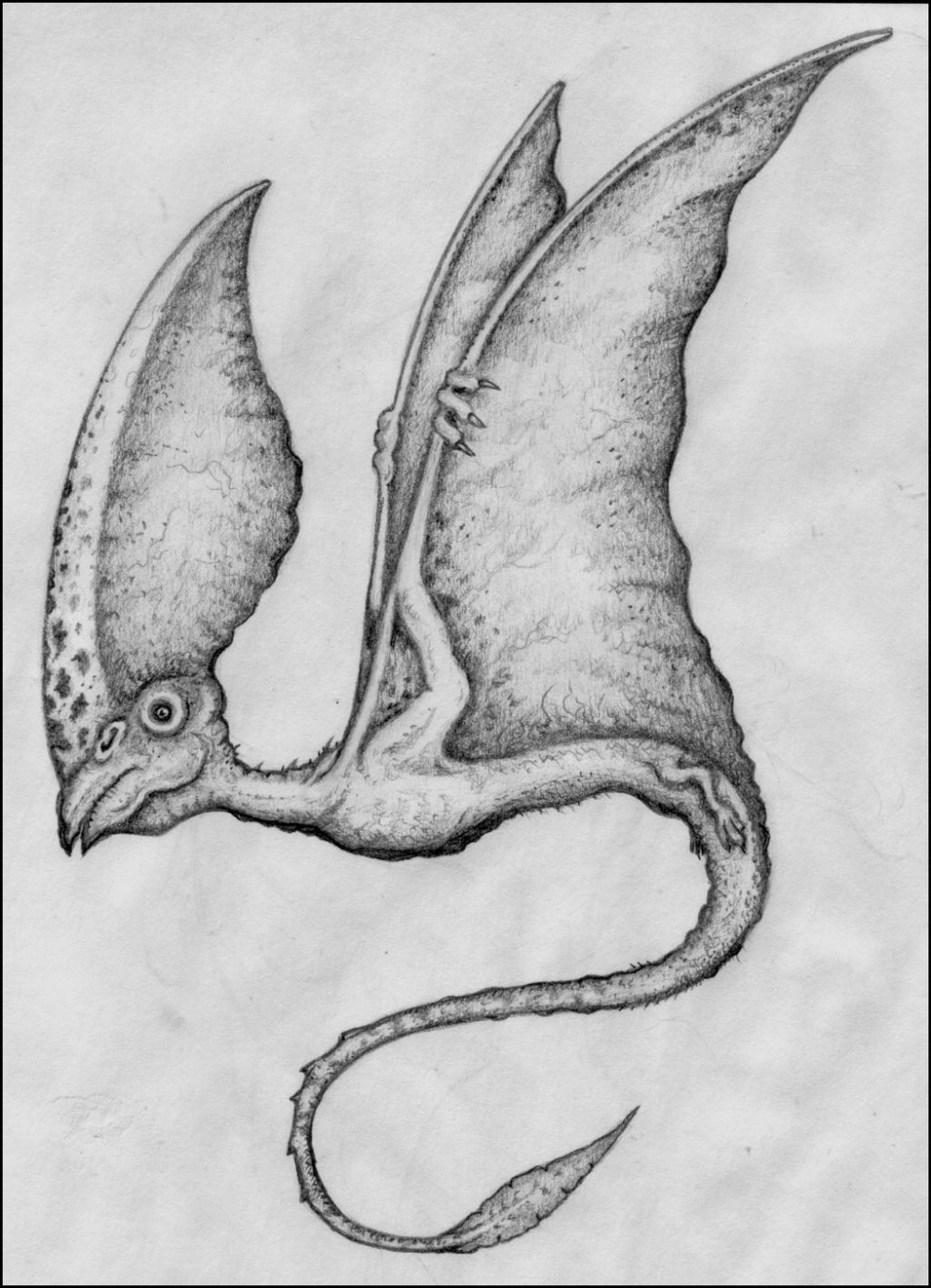 Brown raised the alarm just before dawn. Her excellent night vision gave her the ability to fly in the dark, undetected.

"I don't remember seeing this one," said Dylan.

"You wouldn't in the daytime," said Aaron. "She's a night flier. She sees better than most owls. If our unwelcome visitors thought they'd catch us sleeping, they were wrong."

Brown had never seen so many humans, and she was curious. Fortunately, the men had met the other dragons the day before, and most were friendly to her. She flew around the camp, looking everyone over as they rolled out of bed, preparing for battle. She was fascinated by their armor, climbing in and out of it like a curious kitten.

The sun was rising, and the men could see the army approaching. Brown flew off looking for a dark place to sleep, and her siblings awoke and joined the action. They had the high ground, and the best positions, but Aaron could see they were seriously outnumbered.

Black and Pink looked at them, and at each other. The approaching army was suddenly confronted with a massive black dragon, billowing smoke and fire. Beside him was a huge orange and yellow one, whose body seemed on fire. This one looked hungry enough and angry enough to eat them whole, armor, swords, and all.

The advancing horde ignored them, not firing a single arrow.

"They know it's an illusion," Dylan whispered. "We're going to have to fire some real arrows before they'll shoot back. These guys have guts. How sure can they be? I wouldn't want to walk into that."

Aaron had an idea.

"Sky, pop in behind them and leave some arrows on the ground. Red, set them on fire and get out of there. Then it's the Dragoyles' turn."

That seemed to work. The enemy continued to advance, ignoring flaming arrows, knowing that Dylan's men couldn't possibly have fired them at that distance. The arrows hit home. One man suddenly found his shield alight. He beat it against the ground, putting out the fire. Fortunately for him, no more arrows flew, for the moment.

Aaron recalled Pink and Black since the illusion was not working.

Pink had another idea.

A flaming sixty foot pine appeared in the sky over their heads. They looked up at it and guessed it couldn't be real. The advance continued.

It worked. The illusion hid the real wood the dragons carried into the sky for Black and Red to set alight. The branches that landed were much smaller, but just as hot, and they broke apart when they hit, sending burning twigs and sparks everywhere. A second volley had the ground around them covered in hot coals.

The advance stopped; their commander unable to tell what was real and what was not.

"Did we win?" Pink asked, excited.

"Not yet. They're deciding what to do next," said Aaron.

"We have to do that too," said Dylan. "There's no chance we can fight them sword to sword. If they reach us, we're in trouble."

"Then they must not reach us," said Pink.

They watched the enemy milling around. Some of the men seemed to be retreating, while most held the position.

For nearly an hour, nothing happened. Then Green, perched high in a tree, reported what he saw to Pink.

"They have a big tree with no branches. There are lots of smaller ones with no branches, and round things. They are picking up stones, and pouring water on the trees. Now they are tying the trees together."

"We're in trouble," said Aaron. "We can't let them put that together, or they're going to drive us off this ground."

"There's only one thing it could be. It's a trebuchet. It's usually used in a siege, but it can be used to take this ground. It can be adjusted throw one big rock, or a whole pile of small ones."

"Why does it need to be wet? Oh," the answer came to Duane. "That's to keep us from setting it on fire."

Sky disappeared for a moment and returned with two long, thick pieces of wet leather.

"Sky, no!" said Aaron. "That's a good idea, but it's much too dangerous. They might have trouble putting it together without that, but you were much too close."

Sky dropped the pilfered leather, and the Dragoyles immediately began gnawing on it. Aaron let them have it. He picked up a handful of pebbles and tossed them at a nearby sapling. The pebbles immediately flew in all directions.

Aaron understood their message. He picked up a larger rock and threw it with all his strength. The rock turned in mid air and struck the ground in the opposite direction with a thud.

"Dylan!" Aaron called over the noise. "Get everyone together. We need to find out how many rocks these little guys can turn!"

"Okay, men!" Dylan called. "Everyone pick up the biggest rock you can find and get out of the enemy's line of sight with them."

Dylan explained the plan, and hundreds of rocks flew at once. Only two hit their mark. The rest turned, and flew back the way they had come. Fortunately, the men had been warned, and were able to get behind trees or shields, whooping with excitement.

"The rocks coming from that trebuchet are going to be flying a lot harder and faster," said Dylan. "Do you think they can manage?"

"What if they decide to throw one big rock?" asked Duane.

"Then we get out of the way and let it land," Dylan explained. "The treb is usually used to smash through a gate, or something that isn't going to move. It isn't normally used on a battlefield. I don't think they were planning to use it yet. Their plan was to take us out here, sword to sword. When they got a bit of a surprise, they decided to use it to gain enough ground get at us."

The dragons were huddled together in a group, and Aaron wondered if they were afraid. They could all see the siege engine being assembled. Aaron knew he was probably imagining it, but he thought he heard cursing over something that was missing. Now they had gained enough ground to use it. The dragons had not been able to stop them.

Tension mounted as they watched the rocks being loaded onto the weapon.

The arm of the trebuchet swung around, unleashing its load. The air filled with shouts as the rocks lifted themselves straight into the air and suddenly became scorching hot. A thousand buckets of hot, salty water emptied themselves from a clear blue sky. Men ran for cover as the water and rocks began to rain back down. Those who could find no cover lay on their backs in the hot mucky ground and covered their heads with their shields.

Aaron could hear the shouts. "It's salt! They've boiled the ocean and dumped it on us! Sorcery! Men turned and ran, oblivious to the shouts of their commanders. A few remained, refusing to give up. They marched toward Dylan, Aaron and the men, swords and shields raised.

They were met with ordinary arrows, though some flew straight at them and others dropped straight down from the sky. Hot steam began to rise from the mucky ground and blow at them, hard. When hot mud found its way under armor and chain mail, the commander decided it was a fight he couldn't win. He ordered a retreat.

Aaron, Dylan, and the men looked on in disbelief.

"They weren't snuggled together because they were scared," said Duane. "They were hatching a plan."

"They sure were," said Aaron, as he watched the enemy retreat. They seemed to be grabbing a few supplies, probably food, but the trebuchet was left behind.

"What will you do with it?" asked Duane. He had cut a slice off of Sky's pilfered leather and was making himself a slingshot.

"I don't think I want to ask the men to carry it," said Dylan. "Let it dry for a couple of hours and Red and Black can burn it." He looked at the slingshot Duane was making.

"I think we can do better than that," he said, handing him a bow and a handful of arrows. "It's been used, and I think you can manage it. You won't find yourself a better teacher, if that's what you want."

Duane looked at it in awe, and then at Dylan and Aaron. His voice failed him for several moments. He was finally able to choke out a weak 'thank you.'

The men gathered round, clapping. The dragons joined them.

"Where did all that hot water come from?"

Aaron sent Pink a warning look. He had no idea how, but he knew Blue had something to do with it, and he wanted to keep that a secret.

"I'm afraid that's all the answer you're going to get," said Aaron. "They don't really know how they do it, and neither do I."

"When are we going home?" asked Gareth.

"Tomorrow, I think," said Dylan. "It's unlikely everyone survived that. We'll check their camp and bury their dead. I want to be sure they're not coming back. If there's no sign of them by noon tomorrow, we'll go."

Though they grumbled a bit at the thought of looking for bodies, they were mostly in high spirits. Aaron spent most of the evening showing Duane how to use his bow and arrows. The dragons were curious about the trebuchet, and climbed over it, chewing off the leather binding before they burned it. Dylan let the men and dragons ransack the enemy camp, but they found little of value.

As night fell, the excitement died down, and they were all tired. Aaron was looking forward to sleep so he could spend the night with Blue. With Brown keeping watch, they fell asleep.

A trebuchet is a medieval siege weapon, somewhat similar to a catapult, but it uses a system of counterweights to swing the throwing arm around, so that it throws harder and farther than a catapult. As Dylan told Duane, it could throw one large rock, or many small ones. It was heavy and difficult to carry across rough ground, so it was often transported in sections.
Pays one point and 2 member cents.