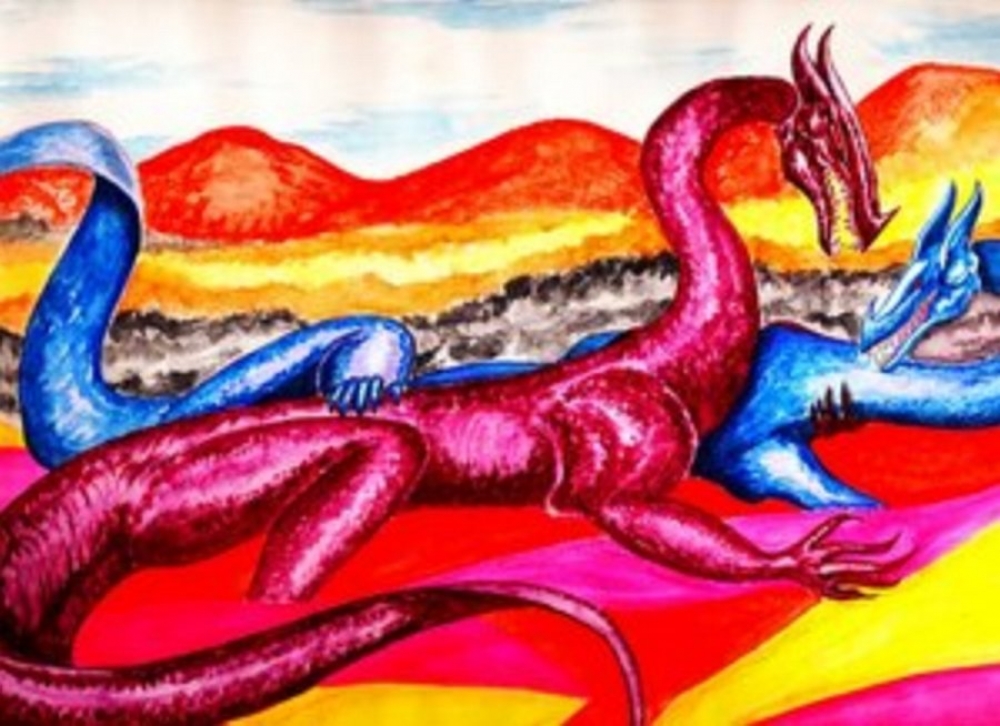 Aaron picked at his breakfast. He found he didn't have much appetite, but the dragons had lost none of theirs. In fact, they seemed excited. Green, who hadn't grown much, picked caterpillars from a leaf and wolfed them down. The others looked for something a little bigger, though they still gobbled up any insect unfortunate enough to come their way.

He watched Black turning over small rocks and twigs. It was the first time he'd seen him do this on his own. After he'd found a few grubs, he used his powerful claws to climb onto the same log the others had used and stretched his wings. He flapped and seemed to be considering taking the next step. Aaron could see he still had some pain, but Black was determined. He marched back and forth on the log, flapping and stretching.

Duane came from the cabin and joined Aaron. "He'll fly pretty soon," he said. "I wonder if he'll grow into those wings."

"I imagine he will," said Aaron. "He's grown so much already. The beating he took doesn't seem to have affected his growing. He's been too well fed."

He tossed a piece of meat from his plate onto the ground in front of the log. Black went for it without thinking. He didn't exactly fly, and landed clumsily, but he was so focused on the food he didn't seem to notice. He righted himself and sat looking at Aaron, hoping for more. When it didn't come, he climbed back onto the log.

Aaron considered tossing another piece, then thought the better of it. Black sat there glaring at him.

"That's enough for now," he said. "You do too much all at once and you're going to start hurting again."

Black looked at Aaron, squawked, and settled himself.

"I think he remembers what happened to the Dragoyles when they didn't listen to you," said Duane.

That got a smile from Aaron. It was so simple. He'd been so concerned about what might be going on in Black's head, he hadn't considered the alternative. Black was no longer the foolish creature who had attacked Demon. He seemed to be developing relationships with his siblings rather than seeing them as potential meals.

"You have a point there. There's nothing worse than an empty head."

"Nope, it sure isn't. I guess there's no use in worrying about it. There's other things we have to worry about."

"Yes," said Duane. "Purple knows too. She doesn't want to go, but she's afraid of fires."

"That's what I'm afraid of too," Aaron admitted. "That's why Dylan wouldn't let his men burn the cabin that first night they were here. Does Purple know where to go?"

"Yes. The woman told her to follow the stream that flows into Hidden Lake. It comes down from the mountains, and if Purple follows it all the way up, she'll find what she needs."

"We have a few days, maybe a week. Let's make the best of them," said Aaron. "We could invent some games so all the dragons can strengthen their wings. It would be good for them to have some fun with each other, especially Black."

Duane proved to be good at inventing games. He was creative, and his inventions ensured each dragon had a chance to win. By evening, when Purple and Brown emerged from their cave, he was creating games where they couldn't use their wings. The two nocturnal dragons joined in happily.

Pink landed on the grass next to Aaron. "It was a good idea," she said.

"I know what you're doing," said Pink. "We all do. We all think it was a good idea. I have another idea. Tomorrow, make them team up so they have to work together to win the deer meat. Make them think. Don't make it too easy."

"That's a brilliant idea. I should have thought of it myself."

Aaron sat watching Green catch a mouse without using his wings. Green had so far not tried to catch them, and it was a challenge for him. Though he seemed quite proud of his success, he showed the mouse to Duane, decided he didn't want it, and claimed his prize after giving the rodent to Black.

The day had passed too quickly. When it was too dark to see, Aaron and Duane had no choice but to go to bed. Aaron, as usual, dreamed of the water dragon. None of the others joined the dream that night.

The next two days passed peacefully. Aaron and Duane exhausted their imaginations coming up with games for the dragons. Black and Red ended up in a few squabbles and nearly cooked each other before they figured out how to cooperate. Mountain and Yellow each carried a Dragoyle up into a tree to find leaves covered in caterpillars. There were no losers there, except perhaps the caterpillars. They were plentiful, and the Dragoyles were happy to get at them. Once up in the branches, they were able to use their claws to hang on, and their wings to maintain balance.

Though they designed the games to be fun, they also had a purpose. Aaron wanted the Dragoyles to be comfortable up in a tree, should he need to get them off the ground in a hurry.

On the morning of the fourth day, Black climbed onto his log, doing his usual stretching and flapping. Aaron thought his movements looked more limber and less painful, and he tossed a piece of meat well ahead of the log. Black, true to form, went for it. This time, he spread his wings and managed to glide several feet. His landing was a bit clumsy, but he righted himself and went for the meat immediately.

Black flapped his enormous wings and squawked, looking at him.

Duane had Yellow and Mountain carry the Dragoyles into the trees again, and within a few minutes, the twins were jumping from branch to branch. The games had worked. Not only were they perfectly at home in a tree, they had allowed themselves to be carried up there.

The humans were pleased. Pink stood by, seeming proud of her contribution. Though the Dragoyles were jumping rather than flying right now, they all knew they'd have the idea very soon. Underneath, though, there was a sadness. They knew their time together was drawing to a close.

As the hours passed, Black's flying skills improved. He was able to get up into the lower branches of a tree and glide back down. Once he had mastered gliding, he worked on flapping and turning. Turns still presented a challenge, but his skills improved with each effort.

Towards evening, Pink landed near a tree in front of them. "Look at me," she said.

They looked. Suddenly, Pink was no longer there.

"Where did she go?" Duane asked, amazed.

"I'm right here," she said. "I've been practicing the trick the woman taught me. I can do it now."

Aaron squinted his eyes, and saw a shimmering in front of the tree where he knew Pink was. Had she not spoken, he never would have noticed her. He would have taken the shimmer as sunlight through the leaves.

"Can you hide the others too?" he asked.

"Not yet. White and I are working on it. Pretty soon we'll be able to do it without help." Pink reappeared in front of them.

Over the next couple of days, the dragons all practiced their new skills. Black was becoming a strong flier, and the Dragoyles did less jumping and more flying. Too soon, the evening came when they all knew they had to say goodbye to Purple.

Purple emerged from her cave with Brown, and they all knew it was time. She came to Aaron and reached her long body toward his face, forked tongue flickering. Brown followed her.

"Brown, no," said Pink. "You can not go with her. You are not a cave dragon. You belong in the forest. Purple will lay many eggs in the safety of her cave. The woman has shown us how we can visit her at night, with the water dragon."

"I know you're going to miss her," said Aaron. "We all are, but I believe we all have our own destinies. Purple was not born to fly. The rest of you were not born to live in caves. Duane and I will saddle the horses and go with her to the lake. You may come that far, but then you must come back with us."

They saddled the horses, and Purple chose to ride with Duane. The Dragoyles rode with Aaron, and the others were able to fly on their own. None of them were in a hurry, and Aaron had to prod them a little in order to arrive before dark.

Purple had not come to the lake last time, and this was her first experience with real water. She proved herself a strong swimmer right away. Mountain, Yellow, and Sky dived in with her, showing her how to catch the fish. They ate their catches, and then it was time for Purple to go. Aaron and Duane could only watch as the others flew or swam across the lake to the mouth of the stream. Then they had to turn around and let Purple swim off on her own.