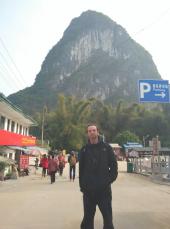 He is also an active reviewer and is holding the #27 spot on the top ranked reviewer list.

A woman loses her inspiration and looks for another job

Tears soaked through the blindfold and she sighed. She didn't even really want to kill him anymore, she thought, but in the same way that she couldn't leave a single mouthful of ice cream in the bottom of the container, she would probably just have to go through with this.

She ran her fingers through his hair, rubbed away the snot from his nose, and then licked his face from just under his chin right up to blindfold, tasting his fear. It was more bitter than usual, and she spat on the floor. She smoothed down his clothes, making sure not even the tiniest patch of skin was exposed to the cool, pungent, basement air. As his whimpers filtered through the blood soaked hand towel tied around his mouth, she couldn't help thinking this was all so normal, almost a bit boring. She even considered taking the light green towel out of his mouth as it was one of her favorites, and washing it before it stained permanently, but she couldn't see anything else within reach to replace it.

The numbness had set in the night before. She had wanted him, of course, he was her type. Tall, thin, balding, a little arrogant looking in his business suit and wire-rimmed glasses. But she was tired, and once she had him tied up, she simply went back upstairs and went to sleep. When she woke up that morning, her mind felt empty, and she just had no desire to go through with it.

Maybe it's time to move on, she thought to herself. I could get a job, I guess, maybe as a teacher, or a librarian. She even opened her computer and put together a short CV and noted down a few jobs online that looked suitable. But then the banging started downstairs, and she knew she had to finish what she had started. She could always write the CV later.

Suddenly, she noticed an eye peaking out from under the blindfold, swinging wildly, bloodshot and swollen with fear.

"Oh bloody hell, you've seen my face," she muttered. "I'll have to kill you now."

She pulled down a piano wire garrote from the wall, the one she had used for her first murder. Using it for her last would be a fine salute to a life's hard work.

"Now this might sting a bit," she said, folding it over his thin neck, and pulling it tight, watching it curve in under the skin, releasing a thin trail of blood. "But it'll all be over soon."

His tongue split between his teeth, snot and blood blasted out over her chest, and the twitching eye exploded. She felt a twinge of regret that she wouldn't feel this again, but, she thought, at least I'll always have my dreams.

Her dreams were where she planned. Recently, as she grew older, she felt that dreams brought more satisfaction than reality because there was no cleaning up, or disposing of bodies. That was what she was really sick of, she now realised. In the corner of the room lay five body bags which she couldn't be bothered to get rid of. She'd thought of hiring a maid for a while but decided discretion could be an issue.

The final gasp of air rattled out of the man's lungs, and she let the garrote loosen and slip to the floor. She took a sip of tea from a cup on the table, then eased her fingers under the edges of the man's clothing and pushed the body off the table and onto a body bag. It landed with a squelch and some blood splattered her shoes.

Then the doorbell rang. She sighed again, removed her bloody overcoat, washed her hands and headed upstairs.

"Yes, what is it?" she asked after she opened the door and found herself face with a middle-aged woman.

"Wait, please. I'm worried about him, he's been missing since last night." A photo of a thin, middle-aged man fluttered in her fingers. "Have you seen him?"

"Well, I'm very sorry to hear that," Petunia said, "but I don't know what would make you think he'd be here. I certainly haven't seen anyone like that around here."

"I tracked his phone to this street," Mrs. Peterson said, quietly. "And his car is parked outside your house."

"I see," Petunia answered, remembering how she had enticed him in by calling for help from her doorstep. "Well, you'd better come inside. I'll make some tea."

This was more like it, she thought to herself, as she moved back to allow the lady to come into the house where her husband had breathed his last breaths only moments before. She felt her heart race- she hadn't killed a married couple for a long time. If only she'd waited a little longer, she could have done them together. She led Mrs. Peterson into the lounge.

"I'll go and make some tea, and then you can tell me all about it," Petunia said, hoping her smile wasn't too wolfish.

So much for giving up, she thought, dropping a handful of tea leaves into the pot. She could still apply for a job, though, maybe something part-time. She poured some milk into a small jug and then took a small bottle down from a shelf and measured out a few drops of cyanide into one of the cups. She would poison her, and then as she died, she would lay the body next to her husband so she could say good bye to him. It was only proper.

Something sharp stuck into her back.

"Pick up that bottle, bitch," a voice whispered sharply in her ear.

"Alright, calm down," she said, reaching for the cyanide bottle from the bench.

"Drink it up," the voice said.

"And if I don't?" Petunia said, almost petulantly.

"Then I'll cut out your liver and make you eat it," the voice said.

"That's a pretty good reason," Petunia said, wondering why she had never thought of doing that to one of her victims. "Can I just ask how you knew it was me?"

"His briefcase is on the table in your lounge, you stupid cow."

"Well, that was silly of me, wasn't it?" she said, raising the bottle to her lips.

All of a sudden, she swung her body around sharply. The small, glass bottle smashed into the side of Mrs. Peterson's head, sending her stumbling backwards. She lowered her head and thrust it into the other woman's chest, and a blow to the back of the neck dropped her to the ground with a thud. The woman's body shook again as Petunia thrust her boot into Mrs. Petunias' ribs.

"You have rekindled my interest, Mrs. Peterson," she said, looking down at the heaving, retching body. "Why don't we go downstairs?"


Story of the Month contest entry
Pays one point and 2 member cents.


© Copyright 2020. oliver818 All rights reserved.
oliver818 has granted FanStory.com, its affiliates and its syndicates non-exclusive rights to display this work.
Don't miss this both by two of our own! A book by Tootie and Commando