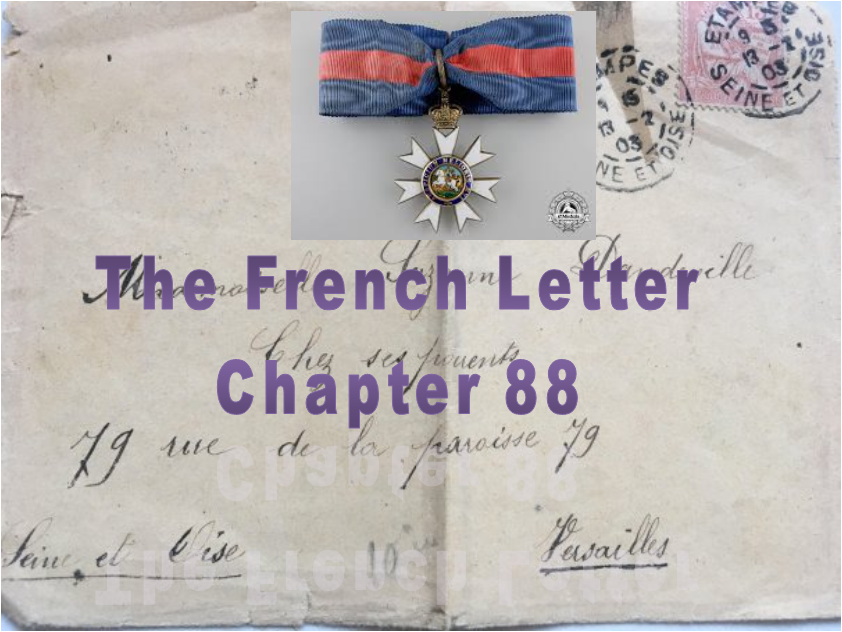 "No. He was quite specific. I'm afraid the invitation was for you alone. I'm sure that Ash will be able to keep Helen amused for a quarter of an hour."

"Of course I will, Apricot my dear. Au revoir, Walnut. Mustn't keep the old man waiting. He's a C.M.G., you know."

Helen looked puzzled. "C.M.G.? What does that stand for?"

"Companion of the Order of St. Michael and St. George," I said as I left the room. "A bit of a mouthful, isn't it? If you prefer the simpler version, it's Call Me God. Either way, he doesn't want to see you."

I was surprised at Helen's calm acceptance of this. However, as Monty escorted me to the great man's office, it occurred to me that she and Ash might welcome time alone. I was convinced a secondary mission was being orchestrated by Mme. Durand and could only hope it would not conflict with our primary purpose.

The Deputy High Commissioner was soon to confirm my suspicions. He turned out to be an approachable man of about my own age. After shaking me warmly by the hand, he dismissed Monty and offered me a drink.

He laughed. "Me, too, but one never knows. Some people relish the prospect of a pink gin any time they can get it in this dry country. It seems that abstinence makes the heart grow fonder."

"Good of you to see me, Sir Robert. I know how busy you must be."

"Robert will do. I don't stand on ceremony." As if to reinforce the point, he ushered me towards a pair of easy chairs in the corner. "There are a couple of good reasons why I wanted you alone, Charles - or should I call you Walnut?"

It took me aback that he already knew the codename Monty had proposed in jest, less than a quarter of an hour before. There was only one obvious conclusion, but I decided not to voice it.

"David Bamforth is a good friend of mine," he continued. "He keeps me in touch, you know."

"So, you know the purpose of our visit to Pakistan?"

"Abdul Jaleel is a formidable adversary," he said. "They have good reason to call him Zemar, for he's certainly the king of the jungle in these parts. Unfortunately, he is already one step ahead of us."

"Your Sikh taxi driver in Lahore. A fanatical supporter of the separatist movement that wants to establish Khalistan as an independent Sikh country within the Punjab. You've heard of them, of course?"

"Yes, I think so." I cast my mind back. "They were the ones responsible for the assassination of Indira Gandhi in the 1980s, weren't they?" I was puzzled and at a loss to see the relevance. "I thought there'd been a crackdown and that the movement fizzled out years ago."

"Not entirely. There are still a few dissidents like Rasheed who have no love of the status quo. Not enough of them to have much impact these days but easy recruits for The Lion."

"How on earth did he know?"

"Gaston Arnoux. His connection with Zemar is not completely severed. He's what the spy movies would term a triple agent."

It seemed that my surmise on the train had been correct. "Then the operation is blown. Helen and I might as well go home."

"Not exactly. Although Arnoux knew of your movements, he was not aware of the exact purpose. He had no knowledge of the mole planted in Zemar's headquarters or the vital list of names."

"Oh, he still exists, but David has taken him out of circulation. I imagine he is being interrogated at this very moment. It would be good if we could persuade him to start feeding misinformation to The Lion."

The words 'interrogated' and 'persuaded' added up to an unpleasant euphemism. I doubted Gaston would be enjoying his time detained at Her Majesty's pleasure.

"There's no reason for your operation to be aborted. The Lion expects travel writers, not a pair of intrepid mountain trekkers. Monty has arranged new passports for you to go with your changed personas - or should that be 'personae'?"

"As in dramatis personae? Yes, probably. There's a fair bit of drama been built into this since I agreed to do it. That's for sure."

"Yes, frankly. The Lion knows we're here and probably assumes we're out to assassinate him. He'll be keen to see the last of us and, on home territory, that should be easy for him to arrange."

"You seem to forget that Helen's also on home territory, and you've already shown that you're a resourceful pair. You just need to keep a low profile until our mole chucks a pear at you."

"Easy for you to say, sitting here in Islamabad. Who came up with that bizarre idea, anyway?"

"I don't even like bloody pears." The absurdity suddenly struck me, and I burst into inane laughter.

Sir Robert joined me and, after we'd wiped away the tears, he slapped me on the back, saying, "You're a good man, Charles. A good man. Now shall we get on with the second matter?"

"Helen and Ash. Shall we see what they've been cooking up together?" He went across to a small device on his desk, pressed a button and waited. Static filled the room.

"Blast! Ash is cannier than I thought. He's managed to block the listening device. Now you'll just have to wait and see."

"I'm sorry," he said, and he sounded genuinely apologetic. "David has known for some time that Jeanne Durand has other plans for Helen's time here. She's been grooming her for work in the French Drug Squad ever since they first met in Bangkok."

"Les stups?" I said it more to show off my knowledge than to seek clarification. I instantly saw from Sir Robert's expression that he knew it, and I felt like a right twit.

"Yes, la Brigade des stupéfiants. As you know, she's a senior figure in the organisation. However, the problem is an historical one. The French versus the English ... know what I mean? She's never fully disclosed her plans. It makes cooperation difficult."

"She certainly has some unorthodox methods," I said. Her exploitation of Helen's sexual ambivalence was sharp in my mind. For a time, it had driven a wedge between us. I had almost lost her because of it.

"I don't quite understand Ash's position in all of this, sir."

"It's an interesting one. He's attached to us as a liaison officer. French, actually - though you wouldn't guess it. One of Madame Durand's mob. Les stups," he added with a poker face. "It would be good to know what they're up to."

Charles Brandon - the narrator, a well-known travel writer.
Rasheed - a Sikh taxi driver in Lahore, radicalised by ISIS
Abdul - a taxi driver in Islamabad, working under cover for the British High Commission
Ash - a French liaison officer attached to the British High Commission in Islamabad. Also a member of the French anti-drug squad (la Brigade des stupefiants), whose operations are directed by Jeanne Durand.
Montague (Monty) - a member of staff at the British High Commission in Islamabad.
Sir Robert - the Deputy High Commissioner at the British High Commission in Islamabad (a personal friend and confidante of Group Captain David Bamforth, the British Air Attache in Paris)
Abdul Jaleel Zemar (The Lion) - Coordinator of an international network of ISIS cells
Helen Culverson - a woman of increasing mystery
Kayla Culverson - her older sister, who disappeared somewhere in Bangkok and has surfaced again in Paris.
Group Captain Bamforth (alias Sir David Brockenhurst) - an intelligence officer with MI6 and Air Attache in Paris
Madame Jeanne Durand - a French magazine editor and undercover agent with the French Drug Squad.
Madame Madeleine Bisset - Helen's landlady in Paris
Mr Bukhari - a Pakistani businessman (now deceased)
Ian 'Bisto' Kidman - an ex-RAF friend of Charles's.
Monsieur Bellini - a denizen of the French Underworld.
Andre (aka Scaramouche) - an actor in Montmartre and friend of Kayla's
Dr. Laurent - a veterinary surgeon in Versailles.
Father Pierre Lacroix - vicar of the Versailles Notre Dame church.
Madame Lefauvre - an old woman living in Versailles - the town gossip.
Alain Gaudin - brother of Francoise, a gardener at Monet's house in Giverney
Francoise Gaudin - Alain's intellectually disabled sister.
Estelle Gaudin [deceased] - mother of Francoise and Alain, a prostitute
Mademoiselle Suzanne Gaudin [deceased] - Alain's grandmother, to whom the mysterious 'French letter' of 1903 was addressed.
Jack and Nancy Wilkins - a Wiltshire dairy farmer and his wife.
Gaston Arnoux - Owner of an art gallery in Paris. A triple agent, who infiltrated the ISIS network in France and fed information to MI6, but who is now providing information to Abdul Jaleel Zemar (The Lion).
Colonel Neville Arnoux [deceased] - Gaston's grandfather. Author of the infamous letter of 1903.


© Copyright 2020. tfawcus All rights reserved.
tfawcus has granted FanStory.com, its affiliates and its syndicates non-exclusive rights to display this work.
Advertise With Us
Copyright © 2000 - 2020 FanStory.com. All rights reserved. Terms under which this service is provided to you. Our privacy statement.
top
You Have No Rank
Share 4 posts to be ranked.