She is an accomplished novelist and is currently at the #31 spot on the rankings. 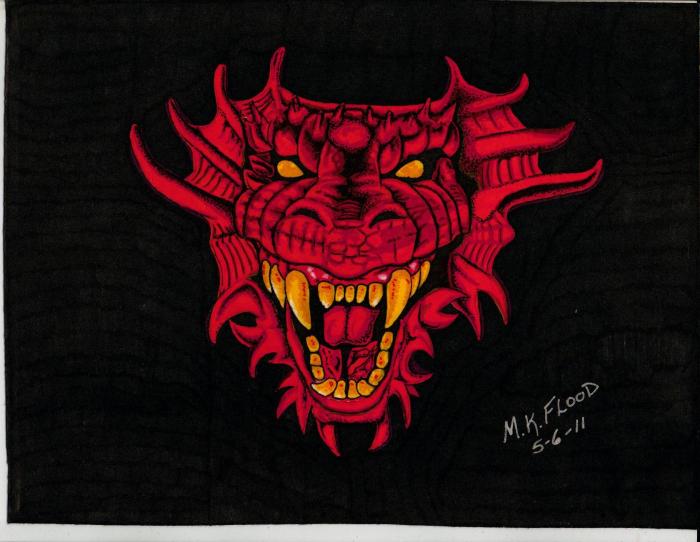 Aaron sat watching the sun go down. Red and Green were flying better as each hour passed. Pink was still having some trouble, and Mountain and Yellow still hadn't managed to get off the ground. Black hadn't moved from the branch where Aaron had dropped him.

Purple still slept in her makeshift cave, and Aaron wondered if she could be persuaded to come out now that the sun was setting. He called Pink and sent her and Duane inside to get her.

Aaron walked over to look at Black. The little dragon didn't move, even when Aaron offered him food. He knew Black was hurting. Though Aaron had some experience with battlefield injuries, internal injuries were beyond him.

Duane came out carrying Purple. He put her in the grass next to her brothers, who greeted her and encouraged her to join them foraging for bugs.

"Is the black one going to be okay?" he asked.

"I don't know," Aaron admitted. "Demon hit him pretty hard. Ever been kicked by a horse?"

"These little guys have pretty tough hides, but it's hard to tell what's going on inside. I'm going to carry him inside and hope he's better by tomorrow," said Aaron.

He picked Black up carefully, and this time the dragon made no attempt to bite him. He carried him in and placed him gently on the woodpile. It clearly hurt him to be moved at all.

Duane stood in the doorway. "What are you going to do?" he asked.

"For tonight, nothing. This isn't something I can put a splint on. He may recover on his own."

Pink came in on her own. Red and Green soon followed. Pink climbed onto the woodpile, flapping her wings, and almost making a short flight. She stood looking at her brother.

"Give him some water," she said.

Duane ran to get it.

"Drink it," Pink told her brother.

"You want me to drop you on the floor again? Drink it!

Painfully, Black turned his head and took a sip.

Aaron speared some meat on a stick to protect his fingers. He needn't have worried. Black was only able to swallow a couple of slivers.

"Will he live?" Duane asked.

"We'll know tomorrow. Now, let's get the others inside and get to bed."

Within moments Aaron found himself again dreaming of the blue dragon. He found Yellow had followed Mountain to join them. Blue seemed thrilled to see them.

"He's alive," said Aaron. He might make it. Could be something that spits fire has insides as tough as his outsides."

Blue considered this. He had clearly never given any thought to his insides. If the others understood, they seemed uninterested. To their way of thinking, whatever was inside was not important.

"What?" Aaron looked around to see who else had found their way into his dreams. He watched, a little startled, as the white dragon crash landed in the water. She sputtered and struggled a bit, then pulled her limbs and wings together and managed to sit on top of the water, like a long sea bird.

She was beautiful. Her body was white, with a single pair of gold tinged wings. Her long thick neck and lizard-like head had a row of short gold spikes running from just behind her nose to the tip of her tail. Strong forelimbs ended in long, claw-like hands tipped with gold talons.

Blue swam splashing up to her, excited to greet his new sister. The other two approached more cautiously. She greeted them politely and turned to Aaron.

"Will you kill him?" she asked.

Aaron was shocked. He hadn't expected this. The gold egg hadn't even hatched yet. He recovered himself quickly.

"You mean the black one. I don't want to. If he attacks Demon again, I will not interfere. Demon will kill him. I told Black that I will not save him again. I meant it. Of course, I don't even know if he will live until morning, but if he does, and he starts getting bigger and more dangerous, I will do what I have to."

The white dragon accepted this. She stayed a few minutes more, enjoying the company of her brothers, though she refused to dive under the water. Then she disappeared.

Aaron was wakened before dawn by a commotion in the clearing outside. He grabbed his sword and shield and ran out the door to find Demon fighting off the same men who had been holding Duane. One of the men was barely able to walk, another clasped his hands to his shoulder. One wielded a knife.

Aaron attacked the knife wielder, knocking the knife to the ground. Blood dripped from the man's hand. He screamed. Aaron heard ribs crack as Demon delivered another powerful kick to one of the would-be horse thieves.

The fight was over almost before it had begun, and Aaron soon knew he had another problem. Normally he'd deliver the men to the king and his part would be over. That wasn't an option right now, and neither was keeping them here.

Aaron couldn't bring himself to kill four men who were no longer dangerous. He held his sword to the former knife-wielder's throat.

The man choked out something that might have been a name.

"I want the names of your friends," he said.

"We're hungry. There's no food. No work," the man stammered.

"Names!" Aaron demanded. He didn't care, but he didn't want them to know that.

The man stammered out the names of his companions.

"You fools are lucky I have business far more important than the lot of you," said Aaron.

"The king sent you to kill the witch. Is she causing this?"

"There's apples and berries. I suggest you stick to them for a while. You keep going east, you'll come to a town. I suggest you find work. You are such fools as outlaws, you'll get yourselves hanged for sure." Aaron didn't mention that the town he spoke of was two kingdoms away.

"I'm hurt," the man who had been kicked complained.

"Would you rather be dead?" Aaron knew it would be slow, painful going for these men, but short of killing them, there was nothing he could do about it. "Get on your way!"

Aaron watched them stumble off, and returned to the cabin to find Duane busily cooking breakfast before the sun came up. Aaron had cautioned him about letting anyone see the smoke.

"Did you get them?" Duane asked.

"They won't be bothering us again. How's Black?"

"He's moving his wings a little. I gave him some water. Purple said he would live," said Duane.

"In my dream. She said I could tell you. She said you'd understand," said Duane.

"She really likes you." Aaron wasn't really surprised. He'd noticed Purple was getting attached to the boy.

"She said I could still talk to her after she has to go. She needs to find a cave before winter. She has to get a little stronger first. Rivers flow down from the mountains and not the other way around, so the journey will be harder for her than it was for Blue."

"That's true. I talk to Blue most every night. Pink said Green could go as soon as he could fly, but he seems happy to stick around, and I'm thinking we could use him as a lookout."

The sun was coming up. Duane fed Purple and put out the fire. Aaron was about to put the other dragons outside when he heard a crack.

Black stayed where he was. The rest gathered around in what had become their usual spots. Even Purple, blinking in the morning light, wanted to meet her new sister. The gold egg was cracking open, and Aaron had a pretty good idea who would be hatching.

Advertise With Us
Unseen Hands
An driving incident with no explanation