Trouble of a Different Kind by Cindy Warren

She is an accomplished novelist and is currently at the #17 spot on the rankings.

Trouble of a Different Kind 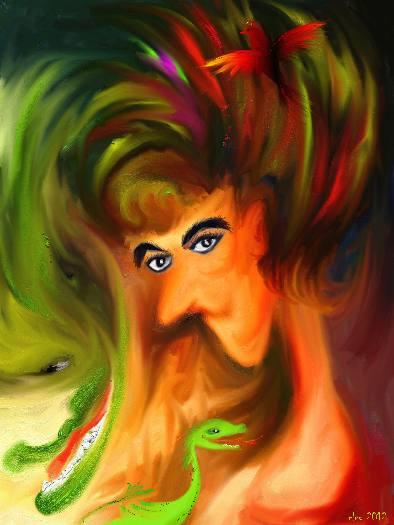 Aaron watched in amazement as the mountain dragon swam in dizzy circles around himself and the water dragon.

Blue answered for him. "Follow Aaron. Other many colors dragon sleep by Aaron."

"Isn't it dangerous? He's not a water dragon."

How does he know that? The water dragon never ceased to amaze Aaron.

Aaron decided it didn't matter. He had become used to visiting the water dragon in his dreams. The two splashed around, delighted to see each other. If Mountain had somehow connected to them, why not let them enjoy themselves? Aaron joined in the fun and spent a pleasant night.

The sun was rising when he awoke to a soft neigh from Demon. He knew the horse sensed something, and shuffled out of his blankets, disturbing the dragon at his side.

He went to the cabin to check his charges, found everything as it had been the night before, and decided to feed the dragons outside. It would cut down on mess and smell. He opened the door, and Red and Green rushed out to greet the morning.

Pink sat in her usual spot in front of the sink. "I think we will have two hatch today," she said. "Now you must go to the cellar."

"Yes, I'd planned on having breakfast outside," Aaron said. "I'll go."

Mountain followed at his heels.

"You go catch yourself some bugs," Aaron told him, and headed for the cellar.

He found he was not alone. The woman was there, and he could see her this time.

"Aaron," she said, "I know you have been considering bringing the eggs down here. You must not. This cellar preserves things as they are. You'll find some chicken eggs when you check more closely. Some may even hatch when you take them outside."

"How do you know what I was thinking? I don't like it."

"You don't seem to mind sharing your thoughts with the dragons, and I've been talking to them since before you were born. That's not important. You might want to lay a cloth under the eggs in case you have to move them in a hurry."

"Has this stuff really been here two hundred years?"

"Yes," she said. "Now, collect what you need and let me get back to what I was doing."

Aaron didn't ask. He collected some fruit for himself and meat for the dragons.

"It should be safe to cook yourself some meat tonight," she said. "It's going to be dark enough. The smoke won't be seen. Don't make a habit of it. If you look under that cloth, you'll find some bread to go with it," she said pointing.

Aaron took a loaf, and using the cloth, he carried everything back to the clearing behind the cabin. The dragons smelled food and came running. Red gobbled her share and went back to chasing bugs.
Green tasted it, then tasted the bread and a small bite of fruit, and decided he preferred bugs. Mountain ate everything he was offered and curled up in Aaron's lap. Pink seemed to enjoy the fruit and bread.

Aaron rested a minute, then headed back to the cabin followed by Pink and Mountain. Taking the eggs out of their sink nest, he saw two had developed deep cracks. He laid the cloth on the straw, wondering why he hadn't thought of this himself, and inspected the deep purple egg with the deepest crack. He placed it back in the sink, and picked up the yellow egg. This one was bright yellow with blue spots.

He busied himself shaving dry bark and chopping kindling, getting the stove ready for tonight, and cleaning the dragons' messes from around the cabin. He wondered if he could convince them to hold it till they got outside.

Pink didn't see why it was necessary.

Aaron tried a tactic he thought the dragon would understand.

"It's something hunters look for. I do it when I hunt deer. It tells me one has been there recently. People are scared to come here, but it won't last. They're getting hungry, and hunger always wins over fear. This cabin will be searched eventually."

Pink considered this. "I will tell them. The bad humans must not see it, and Aaron does not like clearing it out."

Aaron thought he would laugh himself into a fit. He might have, had Pink not stopped him.

Aaron controlled himself and rushed to see the new hatchling. The purple egg cracked open, and Aaron was expecting to see a purple dragon, but the egg's former occupant was midnight black. He flopped around, stretching the longest, blackest wings Aaron could have imagined. His long, ferret-like body rolled about, trying to get long, strong looking limbs under him. His long thick toes were tipped with shiny black claws.

He climbed out of the sink and tried to fold those incredible wings against his body. Aaron wasn't sure he'd ever be able to do that. It seemed an impossible task. He stretched them out again and tried flapping them. Pink backed away. Aaron offered him food, and he snatched it from his fingers, leaving his hand bleeding.

At that, the mountain dragon stood on his hind legs and hissed at him. Black blew a puff of smoke. Mountain hissed, flapped his wings, climbing Aaron's leg in an effort to protect him from the black dragon. Red and Green perched outside the window, watching.

Aaron had an idea. He tossed another piece of meat into an alligator-like maw, offered some water, then held the jaws shut. He tore a strip from the cloth and wrapped it around the snout, so that Black could no longer open his mouth.

"Keep that up and I'm going to put you in a cage in the root cellar. You'll stay like that forever."

They didn't have time to wonder. The yellow egg was cracking. Now that Black was securely muzzled, Pink came strutting back to the eggs. Aaron opened the window so Red and Green could get a better look. Even Black seemed curious about the new sibling.

The occupant of the yellow egg was taking its time. Aaron wondered if it was afraid of its black brother. Finally, after what seemed like an eternity of waiting, a little yellow dragon tumbled free. It took its first steps on three pairs of legs. It had a large yellow head, bright blue eyes, and double rows of tiny blue dots down each side of its body.

The mountain dragon, who had climbed Aaron's leg and now perched on his shoulder, leaned closer to see this new sibling. Aaron lifted him to the counter. Mountain gave Black a warning look and climbed into the sink with the yellow dragon.

The yellow dragon lifted a long, fringed head and a blue snake-like tongue protruded from a cavernous mouth and checked out his sibling. Aaron watched in amazement as the mountain dragon nudged its brother to its feet. His legs were shorter than the black dragon's, but thick and strong looking, with strong claws. He stood and stretched his wings, fell over, and tried again.

"Well, he seems friendly enough," said Aaron. He offered him a piece of meat.

Forgetting his muzzle, Black charged in and tried to steal it. Mountain hissed at him and gave him a swat with his tail. Black backed off and Yellow accepted the meat.

As soon as Yellow was walking, Aaron carried him and Black outside. Mountain was close behind and was soon showing its brother how to turn over logs and find the best grubs.

Pink had followed them out. Green jumped from the window, flapped his wings, and made a rather ungainly landing. Red followed him.

Aaron grabbed Black by the tail and dangled him in the air. "You want that off? You remember I'm a lot bigger than you. You bite anything that isn't a bug I'm going to put it right back on. Got it?"

Aaron had no idea if he did or not, but he removed the muzzle so the dragon could hunt. His co-ordination was still poor, and Aaron didn't think he could go far. Soon he was stumbling about the clearing, stealing bugs from his siblings. Bugs were so plentiful it hardly mattered.

Aaron sat in the sun watching Pink flap up and down from a log. Red and Green were making short flights, usually ending in crash landings. He was almost asleep when an unreal screeching and squeaking woke him.

Fortunately, neither could flame with a mouthful of mouse. It was a dragon stalemate with the unfortunate mouse caught in the middle.

Aaron ran inside and grabbed Red's jug and a slice of meat. He let Black see him drop the meat into the jug. The dragon considered a moment, then decided to go for the easier prey. He was caught. Aaron knew that with his wingspan, Black was in for an uncomfortable night.

He carried the dragon inside out of the sun, and remembering Red's antics, piled wood around the jug,

"My horse needs some attention," Aaron told the remaining dragons. "I'm going for a ride."


© Copyright 2020. Cindy Warren All rights reserved.
Cindy Warren has granted FanStory.com, its affiliates and its syndicates non-exclusive rights to display this work.
Advertise With Us
What cost, Freedom?
Freedom has a staggering cost