An unexpected change of plan

Abdul and the Pink Elephants 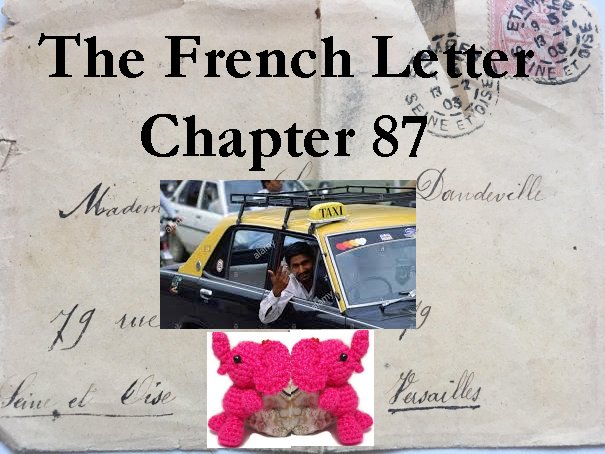 End of Chapter 86
I felt as if a clammy hand had clutched my heart when I realised that, apart from Bamforth and me, Helen was the only other person to know of the existence of the mole in The Lion's lair. If my guesses were correct, she was in a position to blow the whole operation apart, and I was a dead man walking.

I would have liked to quiz the man from the High Commission for more details. However, the other man, the one with half the Pakistani police force in his pocket, chose that moment to return, making further conversation in English impossible. I could only guess what might lie ahead but was relieved to know, at least, that we were not entirely alone.

Soon after midday, our train drew into Rawalpindi Station. We made our way to Pindi Railway Road and found the taxi, replete with pink elephants, just where it was meant to be.

The driver was indistinguishable from any other Pakistani taxi driver, except in one particular. He spoke with an impeccable Oxford accent. A blind man might have taken him to be an Englishman from the Home Counties. He introduced himself as Abdul and told us he would be driving us to a shop in the Capital Plaza called Ascender, where we would be kitted out with more suitable clothing.

As we set off, I saw from the GPS that we were travelling in a north-westerly direction. It took less than fifteen minutes to cross into the Islamabad Capital Territory.

"I'll park as close as I can," he said, "and take you to the shop myself. It's opposite the Bank of Punjab, if you need to change money. You will find some small denomination notes useful." He glanced at me in the mirror. "But there's no need to worry about your purchases in Ascender. They will be billed to the High Commission account." It was clear that Abdul was more than a mere taxi driver.

"What is this place, Ascender, that you keep talking about, and why are you taking us there?"

"Ascender is a very fine shop. The best range of trekking equipment in Islamabad."

"Trekking? What the hell's he talking about?" Helen looked at me in consternation. "We're not trekking."

I was as confused as she was. "Well, what are we doing? You seem to know a great deal more about it than I do."

"Not really," she said, "but I expect all will become clear when we reach the High Commission."

Maybe it is now, I thought, but it wasn't when we left Lahore. I was still puzzled by the man who'd described himself as being loosely attached to the High Commission and in the same game as Jeanne Durand. Although linked, international terrorism and the opium trade were two separate agendas. I wondered what Jeanne and Helen might have cooked up without my knowledge and, presumably, without Bamforth's? It seemed we might soon be playing with matches in a fireworks factory, but this was neither the time nor place to have it out with her.

When we reached Ascender, an inventory of supplies and equipment had already been prepared, and all that remained was to select correctly fitting cold weather gear. I was familiar with most of the equipment from my winter survival training in the RAF, many years before. Some items, such as sleeping bags, lightweight folding shovels, and icepicks, suggested we would be camping off the beaten track. This was at odds with the briefing in Paris, where we had been told we'd be posing as travel writers doing research for an article on Chitral and the Kalash people.

I was turning this over in my mind as we made our way back to the carpark, heavily laden with backpacks. Abdul stowed our gear in the boot, and soon had us speeding eastwards along the Kabul Highway towards the Diplomatic Enclave, a journey of about thirty minutes.

Halfway there, we were slowed by an accident ahead. I nudged Helen and pointed out of the left-hand window to a sign written both in Urdu and English. It was to the Inter Services Intelligence (ISI) Headquarters. These were the Pakistani secret police who had struck so much fear into the heart of Rasheed on account of their unscrupulous ways. I gave an involuntary shudder, hoping we would never have the ill-fortune to fall into their hands.

The High Commission was an unprepossessing building of rectilinear white stucco, surrounded by a three-metre high perimeter fence. There was a guardroom at the entrance with two armed guards. One of them carefully checked Abdul's pass before waving us through, into the enclosure.

We were met by a personable young man wearing horn-rimmed spectacles and a somewhat harassed air. He shook our hands and introduced himself as Montague.

"Most people call me Monty," he said. "Follow me. I expect you'll want to freshen up after your journey. When you're ready, I'll show you to the canteen, where we can have a spot of lunch before getting down to business." He had a staccato way of speaking and mannerisms that reminded me of the White Rabbit.

The meeting that afternoon was brief. It took place in Monty's office and there was only one other person present. We needed no introduction.

"You've already met my colleague, Ash. He tells me that you played your parts rather well on the train from Lahore this morning."

Monty gave a cheerful laugh. "Not really. We give all of our field operatives code names." He looked at my tannin-stained face with some amusement. "I think we ought to call you Walnut."

Helen seemed to think this a great joke. "And what about me?" she said.

Before either of the other two had a chance to speak, I chipped in, "How about Apricot?"

Monty looked at her appreciatively. "Wouldn't Peach be more appropriate?"

"No, I don't think so. She's definitely an Apricot."

Helen refused to take the bait. Instead, she merely raised an eyebrow, as if she were a teacher dealing with two rather silly children.

Ash glanced at his watch and


drummed his fingers on the table. "Shall we get on?"

Over the course of the next fifteen minutes, we learnt that the airport was still closed. We were told the most expedient way of getting to Chitral unnoticed would be as members of a trekking group. It seemed we had already been booked on a tour the following morning, travelling in a minibus run by a local company.

"What was wrong with the original plan? It was much more plausible, given my reputation as a travel writer."

Monty was blunt. "You may be overestimating your renown in this part of the world. Besides, as a travel writer, you would have been more likely to make your visit coincide with one of the annual Kalash festivals. No, this is a better way. We are at the height of the trekking season at this time of the year. You will have much more freedom of movement beyond the villages, without drawing undue attention to yourselves."

"Yes, you could say that. We've booked you into a hotel overnight, and Abdul will take you to the tour company offices in the morning." Monty pushed his chair back, indicating the meeting was at an end. "There is one other thing before you go, Charles. The Deputy High Commissioner has expressed a wish to meet you."

"No. He was quite specific. I'm afraid the invitation was for you alone. I'm sure that Ash will be able to keep Helen amused for a quarter of an hour."

"Of course I will, Apricot my dear. Au revoir, Walnut. Mustn't keep the old man waiting. He's a C.M.G., you know."

Helen looked puzzled. "C.M.G.? What does that stand for?"

"Companion of the Order of St. Michael and St. George," I said as I left the room. "A bit of a mouthful, isn't it? If you prefer the simpler version, it's Call Me God. Either way, he doesn't want to see you."


© Copyright 2020. tfawcus All rights reserved.
tfawcus has granted FanStory.com, its affiliates and its syndicates non-exclusive rights to display this work.
Advertise With Us
Copyright © 2000 - 2020 FanStory.com. All rights reserved. Terms under which this service is provided to you. Our privacy statement.
top
You Have No Rank
Share 4 posts to be ranked.