A Narrow Escape by tfawcus 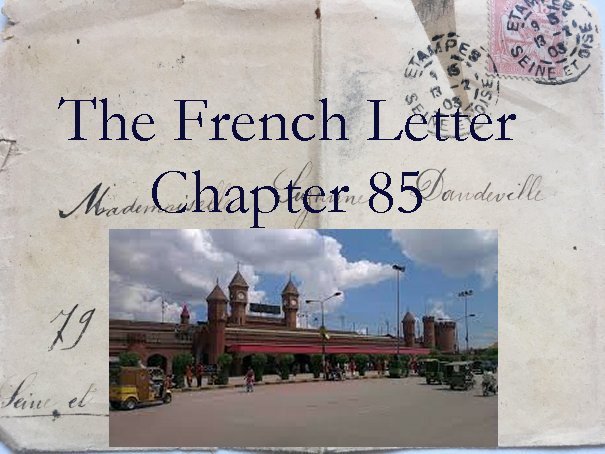 The following morning, I awoke before dawn to find Helen already up, dressed in her new salwar kameez, and putting the finishing touches to her makeup and hair. She looked every inch a woman of quality.

"Time to get up, sleepyhead! We have a train to catch."

I rubbed my eyes, stretched my arms up above my head, and stumbled to the bathroom. I hadn't had much sleep and felt terrible. Leaning against the handbasin, I gazed at my reflection in the mirror. An unshaven man the colour of a ripe walnut stared back at me. I ran some hot water and reached for my razor.

Helen came up behind me. "I wouldn't do that if I were you, Khadim. Your tan is only skin deep. Come on, get yourself dressed. We need to leave in a quarter of an hour."

"There's no need to start ordering me around just yet."

Helen smiled. "Remember, you're a mute. No answering back." Her eyes twinkled. "This is going to be fun, isn't it?"

I was already beginning to regret my assigned role as her manservant, a trusty old retainer who would tag along behind, carrying the bags. There was no doubt she intended to take full advantage of the situation.

The railway station in Lahore is a fortress, square with forbidding watch towers, its thick walls inset with gun emplacements. Built in the aftermath of the great Indian Mutiny of 1857, it has stood for years as an impregnable stronghold, insurance against further strife.

On this day, in the pink flush of dawn, it seemed to draw itself up erect, glistening with pride in the glory of its past. Soldiers were everywhere, their sharp eyes scanning the incoming surge of passengers. A smart European couple ahead of us were stopped and questioned. They were made to produce passports and tickets and, not knowing the ways of the country, became fractious and belligerent.

The man was seized by two soldiers, spun around, stretched out against a wall, and frisked. One of the soldiers jabbed the muzzle of an AK-47 into his silk shirt while his wife looked on, aghast.

Having satisfied themselves that all was in order, the soldiers waved the terrified couple through. Although ruffled and flustered, they had the good sense to walk quietly away, suitably chastened.

Helen approached the soldiers, flashed them a confident smile, and asked in fluent Urdu what was going on. The older one told her about the hunt for terrorists, casting a lecherous eye over her as he spoke. She affected to ignore it.

"We can't have renegades like that running free, Corporal. I trust you'll catch them soon."

"Come on, Khadim! Hurry along. Careful with those bags, now." She raised her eyebrows at the soldier. "I don't know why I put up with that dolt. It's impossible to get good help these days."

If my hands hadn't been otherwise occupied, I'd have touched my forelock. Instead, I grinned inanely and shuffled forward. The soldier helped me along, giving a friendly shove with his rifle butt that sent me sprawling. He laughed and threw Helen a mock salute.

The other soldier picked up one of the bags for me and handed it back. I attempted an obsequious gesture of thanks, praying my perspiration wouldn't make the tannin run. Helen paused and, with a long-suffering look, waited for me to catch up.

The platform seemed to be a mile long as we ran the gauntlet of official scrutiny, making our way towards the first-class carriage. Helen led the way, displaying all the hauteur and arrogance of a Maharani. I followed in her wake with due deference and downcast eyes. I would like to be able to say that I acted my part bravely, but the voluminous folds of my lungi concealed a quaking at the knees matched only by the palpitations of my heart.

At last, we climbed aboard and made our way to the compartment reserved for us. It contained two gentlemen fated to be our travelling companions. The fat one wore a seersucker suit the colour of sour milk. Too tight at the shoulder, it was stained in the armpits with circles of stale sweat. A flamboyant handkerchief of green silk spilled out from his breast pocket but did little to alleviate the sordid impression. His well-oiled hair contributed to the general aura of smarminess as he rose from his seat, extending a garrulous welcome and a pudgy hand, both of which Helen ignored. I smiled at him apologetically.

The other man, thin and austere, sat in the window seat. He glanced up from his copy of the Lahore Post and regarded me with distaste before returning to his paper. There was a picture of Rasheed on the front page.

This disturbing reminder of our plight drew my attention to the station clock. I willed it to speed up. Instead, the long hand tripped by inches, recording each interminable minute before the whistle blew to signal our departure. At last, the carriage lurched forward, and the train creaked and clanked out of the station at a snail's pace, slowly swallowing each group of soldiers as they slid backwards, disappearing from our field of view.

Gradually, we picked up speed, and I felt the tension ease from my body. This relaxation brought with it a sudden and overwhelming need for relief. Excusing myself with a gesture, I backed out of the compartment, and made my way down the corridor, my gait like that of a sailor as I adjusted to the sway of the carriage and the comforting rhythm of the wheels. Clickety-clack, clickety-clack, we-have-escaped, clickety-clack, now-we-are-freeee.

The engine let out a screech of exaltation that was echoed in my heart then, without warning, it plunged into the gaping maw of a tunnel. The brief moment of elation was swallowed in sooty darkness and a bone-rattling terror of the unknown; forewarning of adventures scarcely yet begun.