The Seal of Quality committee has rewarded him with 1 seals. He is also an active reviewer and is holding the #53 spot on the top ranked reviewer list. 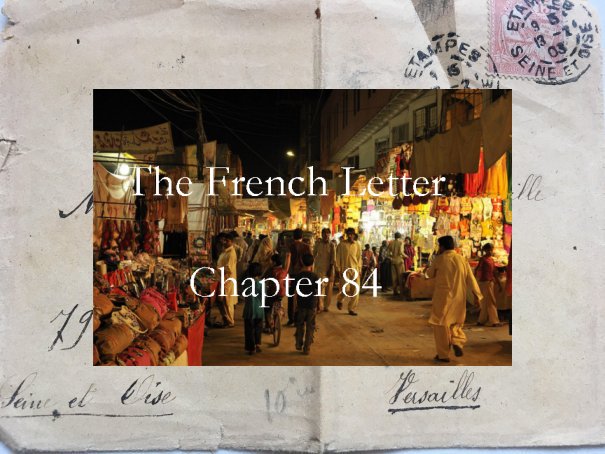 Sure enough, it wasn't long before the TV flickered back on. An official was being interviewed. Helen watched for a few minutes then a look of horror crossed her face.

"He says the suspect was later seen outside the Liberty Market. Two foreigners were climbing into the back of the taxi, a man and a woman. They think they must be accomplices, because the taxi accelerated away as soon as the police gave chase."

"He says the three terrorists managed to evade capture, but police are still searching and expect to make an arrest soon."

I blanched. "So, now we have become hunted terrorists. What on earth do we do next?"

Helen and I looked at each other. We were trapped. The police would be out in force at airports, bus stations and railway stations, all means of escape sealed off while the dragnet tightened.

"Goddammit! Defeated before we even reach Chitral." I crossed the room and, on looking out of the window, was relieved to see the street deserted. "I'm sure it wasn’t coincidence, Rasheed meeting us like that. Someone must have told him about us. The question is, who? And why?"

"No. The question is, what are we going to do about it?"

"You're right. No point in hypotheticals. What we need is an escape plan."

"There is one thing in our favour. On the news, it said two foreigners climbed into the taxi with Rasheed."

"So, they'll be looking for foreigners."

"Like us, you mean? Call me stupid, but I can't see how that counts in our favour."

"I'm not a foreigner. It's only the way I dress that makes me seem so. I know the country. I speak fluent Urdu and Kalasha, and enough Punjabi to get by."

"Great, but what about me?"

"Ever heard of disguise? We could dress you in a kurta and lungi. You'd look great."

"Ridiculous! I'd look like a European in fancy dress. I’d stand out like a snowman in the desert. About the same chance of survival, too. What are kurtas and lungis, anyway? They sound like exotic varieties of mushroom - and I'm being treated like one."

"How do you mean?" (She obviously didn't know much about growing mushrooms.)

"Being kept in the dark and fed on bullshit."

"How rude! All will soon become clear. I have a plan."

"We need to get you some clothes and set about darkening your skin colour."

"At this time of night? What are you going to do? Ask room service for a magic lantern to rub?”

"I'm going to take you to the Anarkali Bazaar. You can get almost anything there, and it's open all hours. My father took me and Kayla once. It's near the Old Town. Not far from here. We could walk it."

I was aware of the sudden sadness of memory in Helen's eyes.

"Come on, then. Let's go gather mushrooms," I said, though it seemed to me a pointless exercise, more like woolgathering. Still, at times like this, daydreams are better than lying down and giving up.


*****
It was a balmy evening. The warm air was scented with frangipani and the horizon held the sultry glow of city lights. I put my arm around Helen as we made our way through a maze of back streets towards the bazaar. The evening star shone brightly, as it had for the Magi two thousand years ago, but tonight we were guided by the Prophet, in the guise of a crescent moon hanging above the red sandstone towers and marble domes of the Badshari Mosque.

The bazaar announced itself with a low hum of activity. Street hawkers plied their wares beneath an enticing drift of eastern spices and charcoal smoke, but Helen guided me past them and into an Aladdin's cave of Kashmiri silks and cottons. She spoke in low tones to the proprietor. He looked me up and down then beckoned me into the back of the shop. Five minutes later, I reappeared in a loose fitting, collarless shirt and a kind of sarong. The material was deliberately ordinary and drab.

"How do I look?" I pirouetted like a mannequin on the catwalk, almost tripping over my sarong.

"Not bad. Not bad at all, but you need a hat. A Chitrali cap, I think. A plain and unassuming pakol. Something that will cover your hair." She put her hands on my waist. "Let me show you how to tie the lungi properly, so you don't end up with it around your ankles." She took up the slack in the material and tied it deftly in a double knot.

"That would be a dead giveaway, wouldn't it?" I had a fleeting vision of myself, standing on the railway platform in my underpants, before being escorted away by the secret police to suffer unimaginable tortures.

Before we left the bazaar, Helen slipped into a grocery store and came out with a quarter pound packet of black tea and a loofah.

"What on earth...?" Then it dawned on me. "But I thought in this part of the world people bathed in asses' milk and honey."

The following morning, I awoke before dawn to find Helen already up, dressed in her new salwar kameez, and putting the finishing touches to her makeup and hair. She looked every inch a woman of quality.

"Time to get up, sleepyhead! We have a train to catch."

I rubbed my eyes, stretched my arms above my head, and stumbled to the bathroom. I hadn't had much sleep and felt terrible. Leaning against the handbasin, I gazed at my reflection in the mirror. An unshaven man the colour of a ripe walnut stared back at me. I ran some hot water and reached for my razor.

Helen came up behind me. "I wouldn't do that if I were you, Khadim. Your tan is only skin deep. Come on, get yourself dressed. We need to leave in a quarter of an hour."

"There's no need to start ordering me around just yet."

Helen smiled. "Remember, you're a mute. No answering back." Her eyes twinkled. "This is going to be fun, isn't it?"

I was already beginning to regret my assigned role as her manservant, a trusty old retainer who would tag along behind, carrying the bags. There was no doubt she intended to take full advantage of the situation.