The Seal of Quality committee has rewarded him with 2 seals. He is also an active reviewer and is holding the #53 spot on the top ranked reviewer list.

On the Slopes of Tirich Mir

The Slaying of the Markhor Pt 2 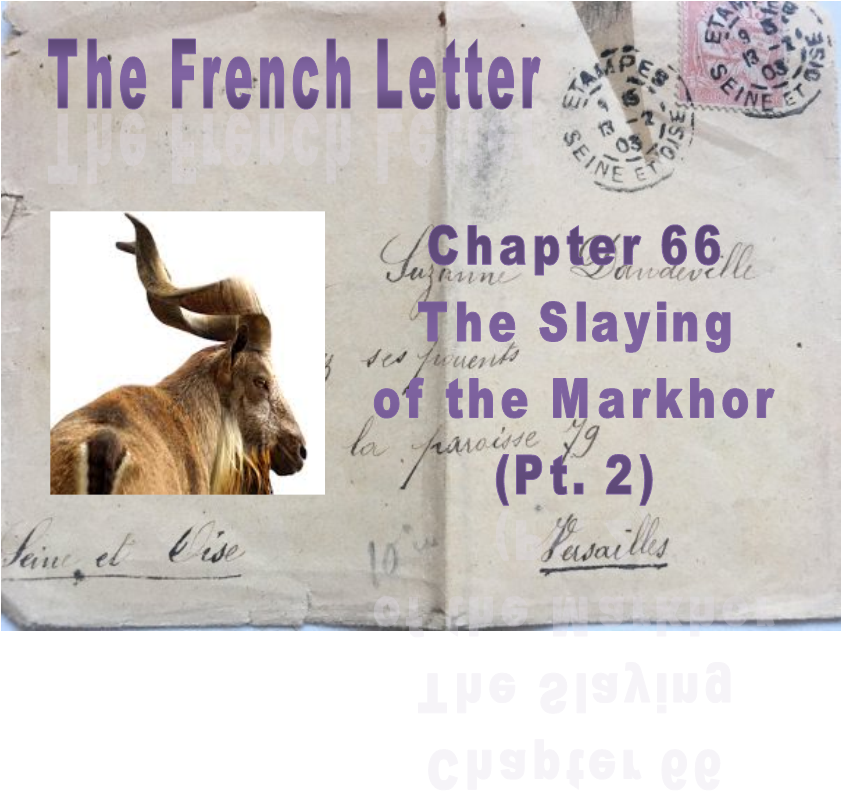 There was a brown, calfskin volume on the table with "Tales of the Hindu-Kush by Sir Robert Kidman K.C." etched into the cover in gold letters. Interesting, I thought - a barrister. One might expect more incisive prose than Bisto gave him credit for. I thumbed through the pages of cursive script until I reached a page entitled "The Slaying of the Markhor":

It is with a heavy heart that I relate this seminal chapter in my father's affairs. It marked the beginning of the end for him. Aspects border on the fantastic. Indeed, I fear that there may have been elements of the supernatural involved in his tragic downfall. Nonetheless, I shall leave that for you, dear reader, to judge for yourself.

I moved to a chair by the bay window through which the early morning sun now streamed, affording me a modicum of warmth, and settled there to read the book in comfort. I found the narrative absorbing:

As previously stated, my father was noted for his prowess with the Snider-Enfield. It was said that he could shoot the eye out of a needle at five hundred yards, though personally I believe this to have been an exaggeration. Nonetheless, he was both a keen hunter and a marksman.

Shortly after the Relief of Chitral, in which he had played a major role, he took it into his head to mount an expedition onto Tirich Mir, whose name roughly translates as the King of Darkness, a forbidding peak rising above 25,000 feet. His unashamed intention was to track and shoot a markhor to add to his trophy collection.

His friends advised against it, warning of the rituals and animistic beliefs that defined the relationship between the markhor and the Kalasha Kafir. A hunting expedition would only stir up trouble. Anyway, they thought it unlikely that he would be able to engage bearers to accompany him, because of their superstitious belief in exquisite, winged spirits called Peri, who were the true guardians of the flocks.

Nonetheless, he was determined, and persuaded two Chitrali tribesman of dubious repute to accompany him. All went well until they reached the foot of the mountain, at which point his bearers deserted him. Realising that his venture was doomed, he took one last look up towards the tree line. There had been a heavy fall of snow during the night and the slopes were pristine. Dawn imbued them with a pink glow and he stood there, dwarfed by the huge silence and, as he later said, 'amazed by the air of sanctity'.

It was then that he saw the markhor, a magnificent beast whose corkscrew horns were beyond compare. It stood, statuesque, at the edge of the trees, surveying its domain. My father estimated the distance to be about six hundred yards, a little beyond the reliable range of his weapon, but he knew this was his only chance. He raised the rifle slowly, took aim at where he judged the animal's heart to be, and gently squeezed the trigger.

The report rang out, reverberating around the mountainside. A small flock of snow finches took flight, whirled around, then settled again, and the wounded markhor turned and bore down upon his assailant. My father scrabbled to remove the spent casing, ripping the glove from his right hand to make the task easier, but his gun was solidly jammed.

Still the markhor came, measuring the distance in heartbeats. The bullet had severed an artery, and plumes of crimson blood squirted from the wound, each one spreading like scattered roses across the virgin snow. At fifty yards, he fell to his knees, like a supplicant making mock obeisance, his corkscrew horns levelled at my father's heart. Then he died.

In later times, before he became incoherent, my father swore that, at the point of death, the noble beast exhaled. His misted breath swirled, transforming itself into a fragile winged spirit that hovered momentarily above the dead markhor before drifting across the void like a firefly, and entering his body.  Impelled by the Peri, the half-crazed hunter staggered forward in a frenzy of bloodlust and hacked the markhor's head from its body before collapsing in a dead faint.

When the bearers turned up in Tirich village without my father, a search party was immediately dispatched. It found him, hours later, suffering from exhaustion and exposure, and soaked in blood from the trophy clutched to his breast. Inexplicably, his boots had been discarded and lay at some distance from his body.

A man who can survive a forced march of two hundred miles across the rooftop of the world, over some of the toughest terrain on earth, is not easily defeated. After weeks of rehabilitation, he emerged physically intact, except in two particulars. Frostbite had deprived him of the index finger of his right hand and both of his big toes. Never again would he hunt and, from that time forth, he was only able to get about with the aid of a stick.

I paused at this point, as I could see Bisto returning from his walk, wisps of breath trailing behind him. In his case, I doubted that they were caused by paranormal activity. As he came through the door, he stamped his feet on the mat and clapped his hands together. A wet and happy spaniel was at his heels.

"Brass monkey weather out there," he said, tossing his deerstalker onto the hatstand. "Now, how about breakfast?"

He glanced down and saw the journal still in my hand. "How did you get on with that? Pretty good nonsense, isn't it?"

Before I could reply, he continued, "He was repatriated shortly after the markhor affair. These days, his condition would be described as PTSD; shellshock following the Chitral Siege. According to my grandfather, his accounts became wilder and more fanciful as time went by. In one of his later versions, he swore that his shot found its target and the markhor fell where it stood. An ethereal maiden stepped from the body. Her dress was pure white, embroidered with crimson roses which she ripped from her bodice, tossing them into the snow as she ran forward to take possession of him.

I was reminded of Kayla, flouncing down the Montmartre street a few days earlier, ravishing in her white frock festooned with scarlet poppies the size of dinner plates. I wasn't sure if the hollow feeling in the pit of my stomach was caused by a yet to be defined sixth sense or by the imminent prospect of a hearty English breakfast.

Both thoughts were cast to one side when Helen appeared at the top of the stairs, clutching the bannister and looking as if she had seen a ghost.

Charles Brandon - the narrator, a well-known travel writer.
Group Captain Bamforth (alias Sir David Brockenhurst) - an intelligence officer with MI6 and Air Attache in Paris
Helen Culverson - Also a travel writer, whose relationship with Charles is complicated by her relationship with Jeanne Durand.
Kayla Culverson - her older sister, who disappeared somewhere in Bangkok and has surfaced again in Paris.
Madame Jeanne Durand - a French magazine editor and undercover agent with the French Drug Squad.
Madame Madeleine Bisset - Helen's landlady in Paris
Mr Bukhari - a Pakistani businessman (now deceased)
Ian 'Bisto' Kidman - an ex-RAF friend of Charles's.
Monsieur Bellini - a denizen of the French Underworld.
Andre (aka Scaramouche) - an actor in Montmartre and friend of Kayla's
Dr. Laurent - a veterinary surgeon in Versailles.
Father Pierre Lacroix - vicar of the Versailles Notre Dame church.
Madame Lefauvre - an old woman living in Versailles - the town gossip.
Alain Gaudin - brother of Francoise, a gardener at Monet's house in Giverney
Francoise Gaudin - Alain's an intellectually disabled sister.
Estelle Gaudin [deceased] - mother of Francoise and Alain, a prostitute
Mademoiselle Suzanne Gaudin [deceased] - Alain's grandmother, to whom the mysterious letter of 1903 was addressed.
Jack and Nancy Wilkins - a Wiltshire dairy farmer and his wife.
Colonel Neville Arnoux [deceased] - of whom we may hear more later.
Gaston Arnoux - Owner of an art gallery in Paris, recently assassinated by Charles Asserted to be leader of an ISIS network
Pays one point and 2 member cents.

tfawcus has granted FanStory.com, its affiliates and its syndicates non-exclusive rights to display this work.
Advertise With Us
Copyright © 2000 - 2020 FanStory.com. All rights reserved. Terms under which this service is provided to you. Our privacy statement.
top
You Have No Rank
Share 4 posts to be ranked.