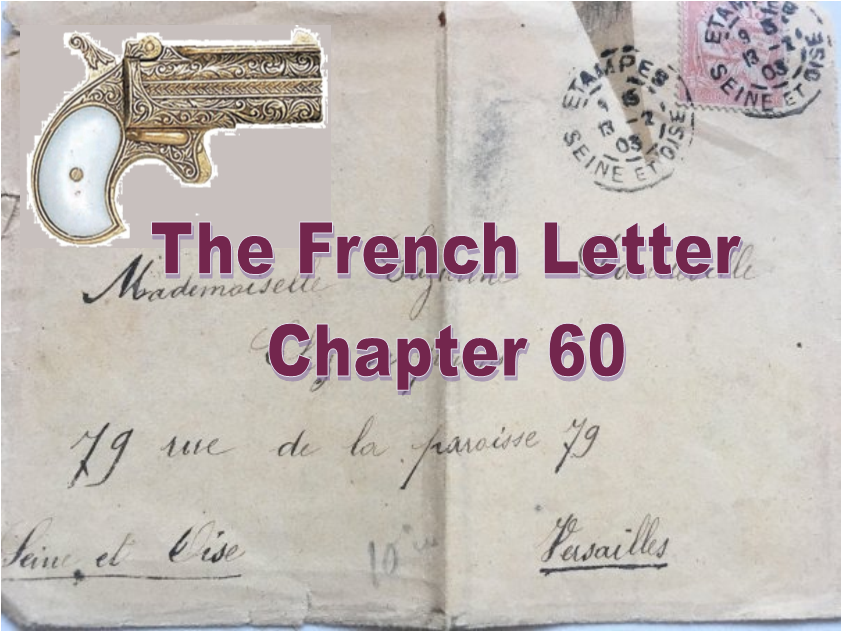 "You've come a long way since some broad stuck a toothbrush in your back and told you to remain very still."

"... and if last night was anything to go by, you're beginning to get the hang of the new James Bond persona. I think I am going to enjoy sharing a world of intrigue with my intrepid hero."

There was a definite twinkle in her eye.

I could think of nothing I'd like better, but there was still the matter of her relationship with Madame Durand to clear up. I couldn't shake the image of her standing on the steps of the Lariboisière hospital and saying to me, "No, Charles. You have a train to catch. I'm staying here with Jeanne."

How I would have liked to have shared my few days in England with her. Perhaps, if she had come with me, I wouldn't now be in this mess. But, as the old saying goes, If wishes were horses then beggars would ride. The fact that she was with me again now was all that really mattered.

Nonetheless, I had to know. "You say that you love me but, only a few days ago, you chose to stay with Jeanne rather than coming to England."

"Really? In what way? She doesn't seem to be the sort of person who needs anyone."

"Now you're being obtuse. She has a desperately difficult job and no emotional support. Everyone needs someone."

"She's fond of me. She's been good to me and I owe her some return. That's all."

Perhaps I should have left it there. Hindsight is a wonderful thing.

"Is that really all? Kayla suggested there's more than just an emotional bond between you. Look, I'm a broad-minded man, but I need to know where I stand. Have you made a definite choice, or is there still some element of ambivalence?"

Helen's hand tightened, scrunching the paper napkin by her plate and when she looked up at me, her eyes glistened. "How could you ask me such a thing after last night? How could you possibly believe-?"

I cut her short. "I had to ask. Surely, you understand. You would kill me if I so much as looked at another woman. You said as much last night. Don't I have the right to expect-?"

"The right to expect? No! You have no rights over me. I'm not your slave. What a nerve! Do you think you own me?"

She pushed her chair back with such force that it fell over and, seizing her cup of coffee, she threw it in my face. "This time you can wash your own bloody shirt." With that, she stormed out and slammed the door.

That didn't go quite as planned. Female logic! Damn her! Damn everything! I wiped away the worst of the tepid coffee and headed for the bathroom. Sure enough, my shirt had copped some collateral damage, so I dropped it in the sink to soak. After a quick shower, I got dressed in my newly acquired cashmere sweater.

The whole operation probably took a quarter of an hour. All that remained was to plunge my shirt up and down in cold water a few times. I was busily engaged in soaping the stain when I heard the door to the apartment open. Pretending not to notice, I carried on with my laundry, curious to see what she'd do next.

The floor creaked as she came up behind me. A small cylindrical object was pressed into my back and I grinned with relief, spinning around before she had time to say, "I have you at my mercy, Charles. Stand very still."

Dashing the toothbrush to the ground, I swung my assailant around to kiss her passionately while she melted in my manly arms. What a glorious opportunity to replay the scene from Rue Gabrielle according to her suggested script.

The next seconds were a blur. The gun clattered to the tiled floor and went off. The glass screen around the shower disintegrated. The woman in my arms kneed me sharply in the groin and I sank to the ground, doubled up in pain. Seeing her gun inches from my grasp, I reached out and grabbed it, only to have it kicked from my hand and sent spinning across the floor. She retrieved it casually and levelled it at my forehead.

"Your reactions were better than I expected, Mr. Brandon - or should I call you Mr. Bond?" The mocking voice was one that I knew only too well. It belonged to Jeanne Durand.

"I suggest we go through to the sitting room. You'll be more comfortable there."

Using the handbasin for support, I dragged myself to my feet. "You bitch! What have you done with Helen?"

"Helen is quite safe. You may be assured of that. For the time being, anyway." She motioned with the handgun for me to sit on the sofa. "It was foolish of you to share so much information with the poor girl. We have the place bugged, you know. What an entertaining evening you gave us. I have to admit, though, that this morning was a bit of a surprise."

The idea that this odious woman and her accomplices had been listening in to the intimacies of the last few hours revolted me more than I thought possible. If it had not been for the pearl-handled Derringer aimed at my midriff... There go those wishes, galloping off into the sunset again.

"How can I put it so an Englishman can understand? You don't seem to have what Jeeves would describe as 'the psychology of the individual'. Nor do I think you fully appreciate the seriousness of breaching the Official Secrets Act. It would be a pity if Group Captain Bamforth were to hear about...," and here she paused for emphasis, "... this lapse of yours."

I felt like a schoolboy being reprimanded. I also felt a gradual easing of the excruciating pain in my groin, and a growing ability to focus my mind on the situation. Easing myself out of the sofa, I walked across to where Jeanne was sitting and stretched my hand out. She passed me the gun without blinking.

"It's a pretty thing, isn't it? Do have a closer look. I wondered how long it would take you to see that it is a single shot weapon. James Bond would have been much quicker to realise that a modern gun wouldn't have discharged on impact."

I handed the ornate antique back and she placed it in her handbag. "Shall we get down to business now? We have more important things to discuss than Miss Culverson's ambivalent sexuality, which - for your information - is largely a myth of her own making." She looked at me pityingly as she dismissed the relevance of my chief concern.

"There is, for instance, your position as a traitor. I understand the penalty for breaching the English Official Secrets Act can be up to 14 years in jail. Did you not consider that Miss Culverson might be an agent for a foreign power? As the Americans say, 'Loose lips sink ships'."

"It's hardly likely that Helen works for a foreign power."

"Perhaps, but you did know that her sister is under surveillance for possible links with a terrorist organisation. The Air Attaché made that clear at our briefing. We are a cautious breed in this profession, Mr. Brandon. That is why we place listening devices. You have a great deal to learn."

"But I thought you wanted Helen and me to work as a team. Bamforth said as much."

"Nonetheless, you have put us in a difficult situation. We specifically asked you not to tell Miss Culverson anything about our plans at this stage. To make matters worse, it seems that you have now alienated yourself from her by your stupidity."

I felt my gorge rising. I wasn't sure how much more of this kind of talk I could take.

"There is one other thing. It is important that you hand over Helen's journal. There are things in it that must not get out."

"I'll bet there are!" I could hardly contain myself. "The journal is safe with me. If you think I'm handing it over, then you're mistaken."

"I don't think you understand." Her tone was expressionless. "Helen fantasises in that journal about her relationship with me. In Pakistan, homosexuality is still a capital offence. It is for her protection that you must hand her journal over for destruction."

I had scarcely absorbed the implications of what she was saying before she deflated me entirely with her next comment. "It would make her position more secure, Mr. Brandon, if you could mend your relationship and marry her before we send you into the Hindu Kush."

Charles Brandon - the narrator, a well-known travel writer.
Group Captain Bamforth (alias Sir David Brockenhurst) - an intelligence officer with MI6 and Air Attache in Paris
Helen Culverson - Also a travel writer, whose relationship with Charles is complicated by her relationship with Jeanne Durand.
Kayla Culverson - her older sister, who disappeared somewhere in Bangkok and has surfaced again in Paris.
Madame Jeanne Durand - a French magazine editor and undercover agent with the French Drug Squad.
Madame Madeleine Bisset - Helen's landlady in Paris
Mr Bukhari - a Pakistani businessman (now deceased)
Ian 'Bisto' Kidman - an ex-RAF friend of Charles's.
Monsieur Bellini - a denizen of the French Underworld.
Andre (aka Scaramouche) - an actor in Montmartre and friend of Kayla's
Dr. Laurent - a veterinary surgeon in Versailles.
Father Pierre Lacroix - vicar of the Versailles Notre Dame church.
Madame Lefauvre - an old woman living in Versailles - the town gossip.
Alain Gaudin - brother of Francoise, a gardener at Monet's house in Giverney
Francoise Gaudin - Alain's an intellectually disabled sister.
Estelle Gaudin [deceased] - mother of Francoise and Alain, a prostitute
Mademoiselle Suzanne Gaudin [deceased] - Alain's grandmother, to whom the mysterious letter of 1903 was addressed.
Jack and Nancy Wilkins - a Wiltshire dairy farmer and his wife.
Colonel Neville Arnoux [deceased] - of whom we may hear more later.
Gaston Arnoux - Owner of an art gallery in Paris, recently assassinated by Charles Asserted to be leader of an ISIS network
Pays one point and 2 member cents.

tfawcus has granted FanStory.com, its affiliates and its syndicates non-exclusive rights to display this work.
Advertise With Us
Stars
Oh Starry night