Chapter 56: A meeting with Kayla 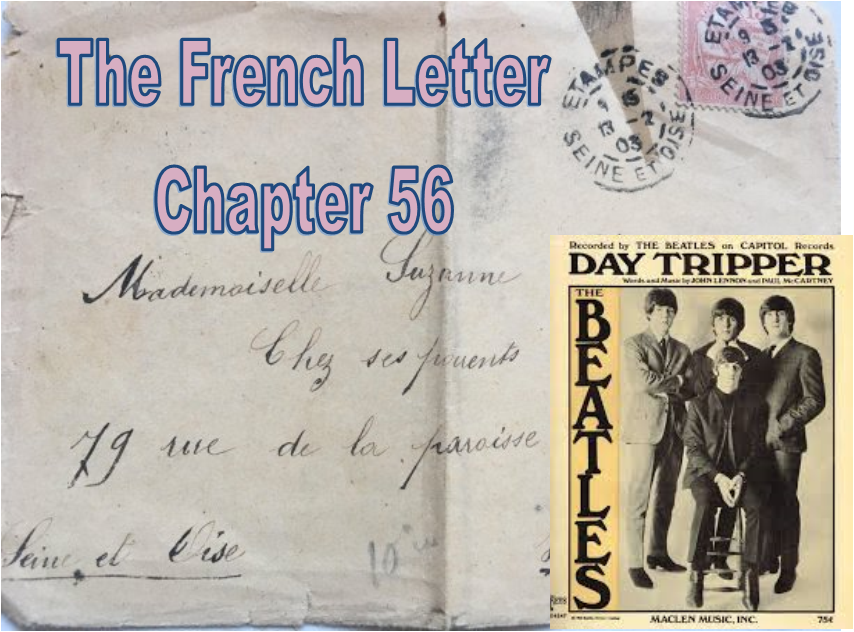 A few minutes later, our man came out, looked hurriedly up and down the street, and walked swiftly away in the opposite direction. My table companion was quick to follow.

I gave them time to disappear around the corner before returning to La Divette. It was going to be fascinating to find out what Kayla had in common with this man who had been following Helen and me when we were at Versailles and later, in the gardens of Giverney. It was the first time I'd seen him by himself. Why was he still at large? I knew that his boss, Monsieur Bellini, had been arrested by les stups nearly a week ago; presumably his oppo, too.

As soon as I entered the wine bar, Kayla sprang up and ran towards me. She threw her arms around me, burying her head in my shoulder and hugged me tightly. After a few moments she pushed back against my chest and looked into my eyes.

"Is it really you, Charles? I'm so glad you've come back. So very glad."

The intensity of her emotion caught me off balance. This was not at all what I had expected. "Whoa! Steady on, old girl. What's this all about?" I put an arm around her and guided her towards a chair. "Come and sit down and tell me what's going on."

She brushed a few strands of hair to one side, managing the vague semblance of a smile through her tears. "I don't know where to start. This has been a terrible few days. They've arrested André. They came in the middle of the night and took him away."

"Scaramouche - surely you must remember him. They burst in without warning. Five or six men in military uniform. I was in the bathroom and stayed hidden behind the door, but I could see through the narrow slit by the hinges. The one nearest me had a badge on his arm with the word RAID in the middle, and Police Nationale in a circle round it. He was carrying a sub-machine gun and barking out orders. One of them hit André on the side of the head with a rifle butt. They dragged him away in his pyjamas, blood trickling down his temple. It was over in less than a minute."

Her account poured out, a tumble of words leaving her breathless. She slumped on the table, her head between her arms. At a loss to know how to comfort her, I leaned forward to touch her arm, but she pulled away.

"I don't know what I'm going to do. He was everything to me. I'm terrified. Who were those men? What did they want with him?"

"I'm not sure. I've never heard of RAID but it sounds like a special forces unit. We can find out. What do you know about André? Had he been involved in anything illegal?"

"He's a sweet, sweet man under all that swagger. Not at all the pompous ass that he makes himself out to be. Really, he wouldn't hurt a fly. There's not a mean bone in his body."

"There must be some reason why they arrested him. Think back. Are you sure you don't know what it might have been?"

Kayla's eyes flashed. "Of course not. He was just an actor in the commedia dell'arte troupe. An actor, nothing more."

Perhaps an actor at more than one level. And what about Kayla? If she's acting, then she's doing a mighty fine job of it.

Having heard what Bamforth said, I thought it sounded as if RAID might be an anti-terrorist squad. What puzzled me was why they hadn't arrested Kayla at the same time. Did they really not know she was there?

"When did all this happen?"

"And since then? Has anything else happened?"

"What makes you so sure?"

"A gut reaction. A sixth sense, if you like. Then sometimes I see him out of the corner of my eye."

"What does he look like? Can you describe him?"

"No, he's always too far away and partly hidden in the shadows."

"I know what you mean," I said. "Helen and I were being tailed last week when we went to Versailles. Two men. We caught sight of them now and again. One was tall and had a swarthy complexion. He might have been North African. I'm not sure." I paused to take a drink and to see if there was any reaction from Kayla. "The funny thing is that I saw someone just like him leaving here a moment or two before I walked in."

"Really? I didn't notice anyone like that. How strange."

"I was probably mistaken. We found out that they were Bellini's men. You know, the drug dealer who was arrested the other day. It was all over the papers."

"Was it? I never look at newspapers. The news is always so depressing."

I knew she was lying but there wasn't a trace of it in her demeanour. I could only hazard a guess at the game she was playing.

She got up suddenly. "Excuse me. I need to go to the toilet. I'll be back in a moment."

I leaned back in my chair and listened to the music from the jukebox while I waited for her to return. It was an old Beatles song, Day Tripper. I started to tap the rhythm on the table with my hand and to mime the lyrics:

When Kayla reappeared, she seemed like a different person. Her natural gaiety and humour had returned. Her eyes sparkled and she spun around on her toes. "Come on!" she said. "Let's dance. I love this music."

She pulled me up from my chair and drew me in close. This was just as well, for although I can manage a slow shuffle at close quarters, I'm no dancer. There was a sensual electricity in her movement that overwhelmed and rather frightened me.

She laughed. "You are an old fogey! Where's your sense of fun? This is Paris - city of love."

I steered her back to her seat and resumed mine with some relief. Lifting my glass, I clinked it against hers. "Cheers!" I said, taking a large draught to regain my composure.

Kayla giggled and wiped her nose with her sleeve. It was then that I noticed the tell-tale trace of white powder. Now I understood her sudden mood change, the reason for her meeting with Bellini's henchman, and her denial of having even seen him. Things were beginning to fall into place.

Charles Brandon - the narrator, a well-known travel writer.
Group Captain Bamforth (alias Sir David Brockenhurst) - an intelligence officer with MI6 and Air Attache in Paris
Helen Culverson - Also a travel writer, whose relationship with Charles is complicated by her relationship with Jeanne Durand.
Kayla Culverson - her older sister, who disappeared somewhere in Bangkok and has surfaced again in Paris.
Madame Jeanne Durand - a French magazine editor and undercover agent with the French Drug Squad.
Madame Madeleine Bisset - Helen's landlady in Paris
Mr Bukhari - a Pakistani businessman (now deceased)
Ian 'Bisto' Kidman - an ex-RAF friend of Charles's.
Monsieur Bellini - a denizen of the French Underworld.
Andre (aka Scaramouche) - an actor in Montmartre and friend of Kayla's
Dr. Laurent - a veterinary surgeon in Versailles.
Father Pierre Lacroix - vicar of the Versailles Notre Dame church.
Madame Lefauvre - an old woman living in Versailles - the town gossip.
Francoise Gaudin - an intellectually disabled woman living in Versailles.
Alain Gaudin - brother of Francoise, a gardener at Monet's house in Giverney
Estelle Gaudin [deceased] - mother of Francoise and Alain, a prostitute
Mademoiselle Suzanne Gaudin [deceased] - Alain's grandmother, to whom the mysterious letter of 1903 was addressed.
Jack and Nancy Wilkins - a Wiltshire dairy farmer and his wife.
Colonel Neville Arnoux [deceased] - of whom we may hear more later.
Gaston Arnoux - Owner of an art gallery in Paris, recently assassinated by Charles Asserted to be leader of an ISIS network
Pays one point and 2 member cents.

tfawcus has granted FanStory.com, its affiliates and its syndicates non-exclusive rights to display this work.
Advertise With Us
Lineage
A minimalistic free verse, thoughts about lines