Know Your Mind! by HealingMuse 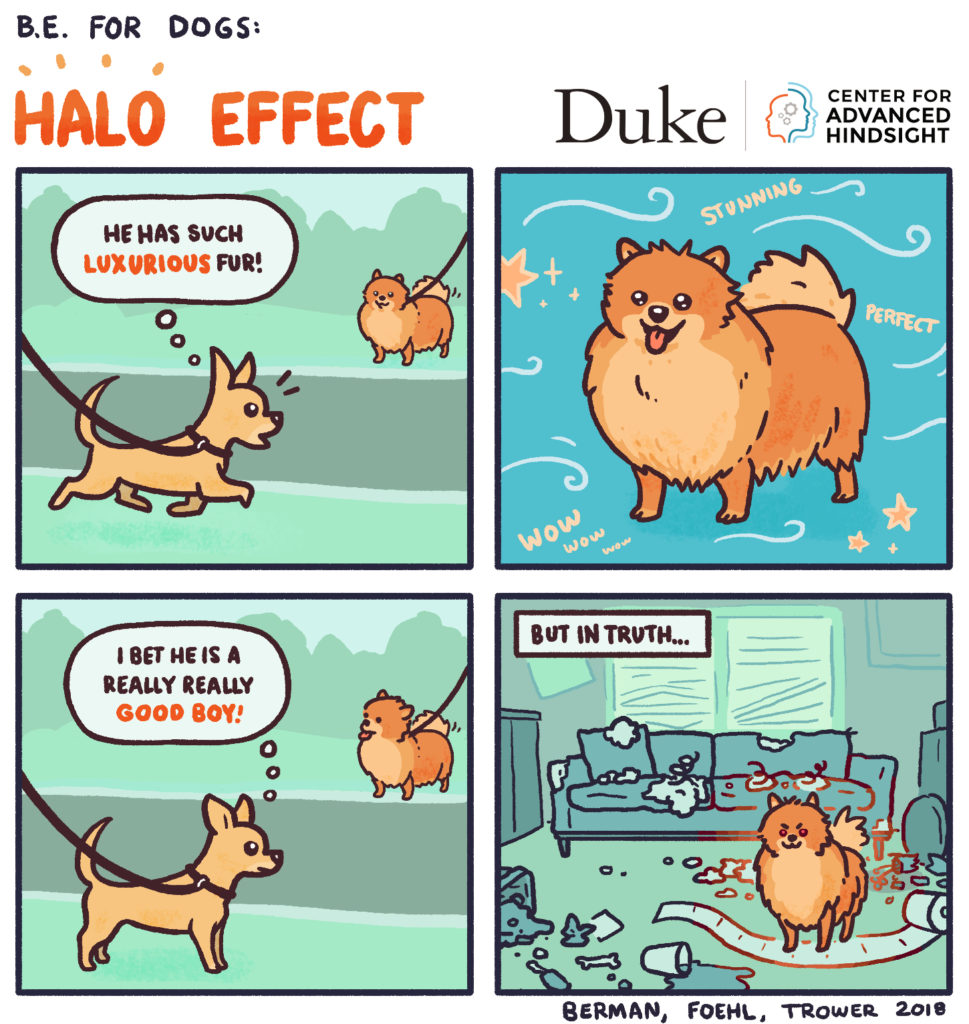 Have you ever met someone at an event which was important to your core essence, initially believing the person was perfect, only to find out later than this perception was deeply flawed? This is what Thorndike* coined the "halo effect." Let's explore this together with our typical short movie scene...

Claire is a very religious person, attends church regularly and participates in many volunteer activities. The church is the center around which her life revolves as her faith is strong and her social conscience is high.

Claire is surprised and delighted to find a new member in attendance at the breakfast following the service and is instantly smitten. Just "knowing" this is "the one." He is of the same faith, handsome, age appropriate, polite, well- groomed and dressed nicely. What more could a girl want, right? As it turns out, quite a bit!

Claire and Thomas exchange pleasantries and chat about church activities, the weather, and their respective careers, with Claire being taken in more with each topic discussed. They begin dating and after some months, Claire finds out that there is a lot more to Thomas than she had initially presumed. She is shocked to find that Thomas has some quite unnerving interests!

One day while visiting Thomas, he leaves the room to answer a call and Claire decides to check her email on his laptop, a seemingly innocuous activity which Thomas frequently engaged in as a guest in Claire's home. Suddenly, an instant message pops up from a known close friend of Thomas, with references to child pornography and drugs. Claire is bewildered, initially thinking this to be a joke, but she quickly realizes this is not the case.

Before she knows it, he is standing over her shoulder glaring at the screen, and yelling at her, his anger palpable. Thomas is seething at her for using his computer in an obvious attempt to redirect his feelings of guilt onto Claire.

With his anger rapidly escalating, Claire quickly extricates herself from the situation, feeling both bewildered and fearful. She is perplexed by this situation and wonders how she could have thought he was a decent guy.

The answer is simple: the halo effect, a form of cognitive bias--a presumption Claire made on the basis of Thomas' religious preference, which led her to believe he must hold the same core values as her own.

The moral to the story: please don't put your trust in people too quickly, based on one dynamic of their lives. This can be painful and even dangerous.

This release was inspired by a release I read yesterday by one of our community members who was feeling disillusioned and sad because of a similar, but very different circumstance.

Thanks for reading and reviewing this piece. I hope you find this information to be helpful.

This is only one possible scenario--attending church has nothing to do with this, other than it is an example I feel many here might be able to readily relate to, and the situation could very well have been reversed, with Claire having the perverse interests. With some folks, meeting someone at a concert, or out on a jogging trail could well be the single unifying factor to set the halo effect in motion.

Cognitive biases are somewhat normal brain functions, as our brain's primary purpose is to keep us alive and is constantly scanning for the "good" an "bad" in our environment -- what is "safe" and what isn't. In order to do so effectively, some categorizations must be made and generally work well in the moment. In other words, Thomas presented no imminent threat at the church breakfast, but in a personal situation, his behavior was unacceptable.

The implications of this dynamic of our brains' functions is vast, with possible impacts in education, business, personal relationships and the workplace, to name a few.

Additionally, this is a well-known and manipulated concept in the marketing field.

Advertisers use this every day to lure us into buying their products. Be aware!

The term "halo" is used in analogy with the religious concept: a glowing circle crowning the heads of saints in countless medieval and Renaissance paintings, bathing the saint's face in heavenly light. The observer may be subject to overestimating the worth of the observed by the presence of a quality that adds light on the whole like a halo. In other words, observers tend to bend their judgement according to one patent characteristic of the person (the "halo"), generalizing towards a judgement of that person's character (e.g., in the literal hagiologic case, "entirely good and worthy").

The term halo effect is used in marketing to explain customer bias toward certain products because of favorable experience with other products made by the same company.[29]

The halo effect is also present in the field of brand marketing. One common halo effect is when the perceived positive features of a particular item extend to a broader brand. A notable example is the manner in which the popularity of Apple's iPod generated enthusiasm for the corporation's other products.[30]

This phenomenon also transfers to the automotive industry, in which low-volume sports cars made by a manufacturer's racing, motorsports, or in-house modification teams are sometimes referred to as "halo cars" for the effect they produce on selling other vehicles within the make; a halo car may also be used to identify a maker as environmentally conscious or modern.[31]

A halo effect with regard to health, dubbed a "health halo", is used in food marketing to increase sales of a product; it can result in increased consumption of the product in the halo which may be unhealthy.[32][33]

The term "halo effect" has also been applied to human rights organizations that have used their status to move away from their stated goals. Political scientist Gerald Steinberg has claimed that non-governmental organizations (NGOs) take advantage of the halo effect and are "given the status of impartial moral watchdogs" by governments and the news media.[34][35]

A brand's halo effect can protect its reputation in the event of a crisis. An event that is detrimental to a brand that is viewed favorably would not be as threatening or damaging to a brand that consumers view unfavorably.[37][38]

Thorndike (1905) introduced the concept of reinforcement and was the first to apply psychological principles to the area of learning.

His research led to many theories and laws of learning, such as operant conditioning. Skinner (1938), like Thorndike, put animals in boxes and observed them to see what they were able to learn.

The learning theories of Thorndike and Pavlov were later synthesized by Hull (1935). Thorndike's research drove comparative psychology for fifty years, and influenced countless psychologists over that period of time, and even still today.


© Copyright 2020. HealingMuse All rights reserved.
HealingMuse has granted FanStory.com, its affiliates and its syndicates non-exclusive rights to display this work.

Advertise With Us
The Final Chapter
Chapter 116: Charles's adventures are over ... or are they?

Pays: 10 points. and 1.14 member dollars
Copyright © 2000 - 2020 FanStory.com. All rights reserved. Terms under which this service is provided to you. Our privacy statement.
top
You Have No Rank
Share 4 posts to be ranked.