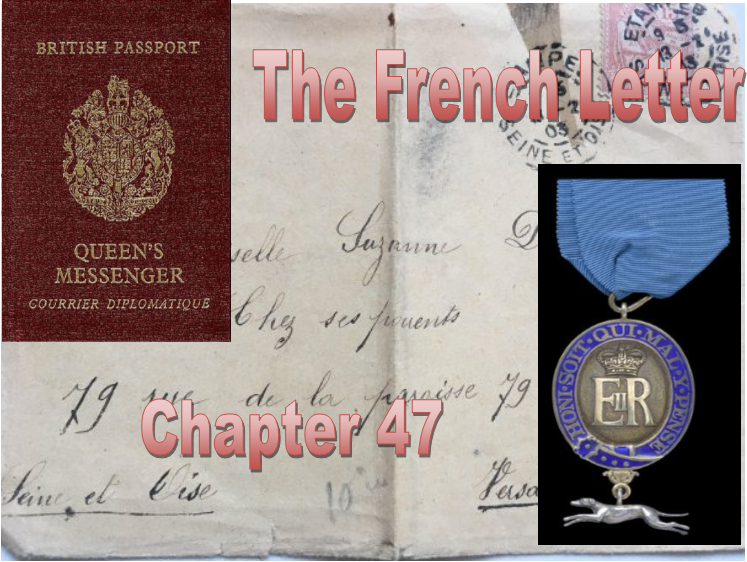 Last paragraphs of Chapter 46...
My head was spinning. Things were moving faster than I had expected. I glanced at my watch.

"I won't keep you any longer.

I imagine that you have a few arrangements to make before you leave."

He extended his hand. "It's been a pleasure meeting you, Mr. Brandon. If you wait here a moment, I'll get someone to take you down to pick up your ticket and the paintings."

The keeper of the paintings was a nondescript looking man named Brown.

"You have to understand, Mr. Brandon, the temporary nature of this arrangement. It's a matter of national importance that our package reaches its destination unimpeded and unobserved. There are reasons why we are unable to use a regular Queen's Messenger as courier, and that is why I am issuing you with a Diplomatic Passport.

"These two paintings will have the status of a diplomatic bag. As such, they are not subject to scrutiny by security x-ray and they're immune from customs search."

I couldn't help being reminded of Q, the James Bond gadgets' man, when he continued, "As you can see, it has a tamper-evident seal to deter or detect interference by unauthorised third parties. We can't be too careful. I'm sure that I hardly need mention that you must never let the parcel out of your sight."

Nondescript Brown paused for breath and allowed himself a ghost of a smile as he added, "Not that we anticipate you being set upon by enemies of the state."

My throat was dry, my skin was clammy, and, for a moment, I thought I was going to pass out.

"You don't look well, Mr. Brandon. Can I get you a glass of water?"

I shook my head. "No, thank you. I'm just a little claustrophobic, that's all. Windowless basements have that effect on me."

"How unfortunate." Brown's tone of voice lacked any vestige of sympathy. "When you reach Paris, you are to go straight to La Galerie Arnoux on Rue de Dunkerque. It's not far from the Gare du Nord. Hand the package to this man. He is expecting you."

The anonymous Mr. Brown slid a photograph across the table. "This is Gaston Arnoux, the owner of the gallery."

I studied the photograph carefully and was about to pass it back to him when he said, "Keep it. I'd hate to think what might happen if you gave the paintings to the wrong man.

"Oh, and there's one other thing. Keep the package hidden in your case at all times except, of course, when you are passing through Customs and Immigration. Under no circumstances should it be subjected to the x-ray machine along with your personal effects. That is most important. Do you understand?"

"No, not really. All this cloak-and-dagger rigmarole seems to be way over the top. What's the purpose of it?"

Brown ignored my question. "Tomorrow morning, you are to report to the British Embassy on Rue du Faubourg Saint-Honoré, where you will hand over your Diplomatic Passport. You will also relinquish your position as P. A. to the Air Attaché on completion of this courier assignment. Wing Commander Bamforth has instructed me to transfer £5,000 to your bank account, in lieu of notice."

*****
It was with some relief that I left the building, clutching the package of national importance to my breast. It didn't take me long to make the necessary phone calls to Mrs. Wilkins and Bisto Kidson, letting them know that I'd been urgently recalled to Paris. Neither seemed too surprised, for my movements were notoriously erratic. Nancy Wilkins said she'd check from time to time to make sure that all was well with Moonraker Cottage. Bisto cheerfully assured me that he wouldn't put too much extra mileage on my pride and joy.

Avoiding the start of the London rush hour, I arrived at St. Pancras with time to spare and the journey to Paris was smooth and uneventful. The Eurostar pulled in to the Gare du Nord on schedule, just before eight o'clock and I decided to walk, rather than joining the queue for a taxi. It was a clear, moonlit night and La Galerie Arnaud was less than five minutes from the station.

Gaston was waiting outside the gallery to meet me. I had intended to suggest an appointment to view the paintings he had for sale, hoping to discover something about the portrait of Alain's grandmother. However, there was no opportunity. As soon as I handed him the package, he scurried through the door, locking it behind him.

I shrugged my shoulders and carried on a few doors down the street, humming to myself and thinking that was probably the easiest £5000 I would ever earn. I entered the Portuguese restaurant, Churrasqueira Galo, in a buoyant mood.

I had scarcely finished ordering my barbecued chicken when the room was shaken by an ear-splitting explosion. Pandemonium ensued. People ran in all directions. A wild-eyed man burst into the café shouting, "Il y a eu un attentat terroriste! A terrorist bombing! Take cover!"

It was hardly the work of a genius to see the reason behind Mr. Brown's 'tamper-evident seal'. I had no need to join the panic-stricken crowd milling about in the street. I already knew what had caused the explosion, and what lay mangled among the debris and shattered glass.

I quietly slipped out of the restaurant and started walking, numbed by the enormity of my unwitting involvement, and unsure what to do next.

Charles Brandon - the narrator, a well-known travel writer.
Jack and Nancy Wilkins - a Wiltshire dairy farmer and his wife.
Ian 'Bisto' Kidman - an ex-RAF friend of Charles's.
Wing Commander Bamforth (alias Sir David Brockenhurst) - an intelligence officer with MI6
Helen Culverson - a woman of some mystery, also a travel writer, whose relationship with Charles is complicated by her relationship with Jeanne Durand.
Kayla Culverson - her older sister, who disappeared somewhere in Bangkok and has surfaced again in Paris.
Madame Jeanne Durand - a French magazine editor, who was involved in a serious accident, and seems also to be involved with international drug trade.
Mr Bukhari - a Pakistani businessman (now deceased)
Madame Madeleine Bisset - Helen's landlady in Paris
Monsieur Bellini - a denizen of the French Underworld.
Dr. Laurent - a veterinary surgeon in Versailles.
Father Pierre Lacroix - vicar of the Versailles Notre Dame church.
Madame Lefauvre - an old woman living in Versailles - the town gossip.
Francoise Gaudin - an intellectually disabled woman living in Versailles.
Alain Gaudin - brother of Francoise, a gardener at Monet's house in Giverney
Estelle Gaudin [deceased] - mother of Francoise and Alain, a prostitute
Mademoiselle Suzanne Gaudin [deceased] - Alain's grandmother, to whom the mysterious letter of 1903 was addressed.
Colonel Neville Arnoux [deceased] - of whom we may hear more later.
Gaston Arnoux - an unknown quantity at this stage, a dilettante. Owner of an art gallery in Paris.
Pays one point and 2 member cents.

tfawcus has granted FanStory.com, its affiliates and its syndicates non-exclusive rights to display this work.
Advertise With Us
Copyright © 2000 - 2020 FanStory.com. All rights reserved. Terms under which this service is provided to you. Our privacy statement.
top
You Have No Rank
Share 4 posts to be ranked.