A Thanksgiving to remember! 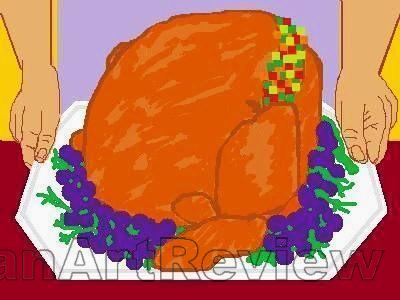 My mother was the predominant parent in my life. She raised me and my three siblings single-handedly. She was kind, loving and hard working. Very early in her life, she was presented with harsh circumstances that most people would not have recovered from.

We started life over many times as a broken family. Things began to look up when my mom remarried in March of 1967. I was twelve years old.

To be honest, I wasn't really sure what to do with a dad. But, I was willing to give him a chance. I wanted my sweet mother to catch a break and smile again, always hoping for a normal family life.

Holidays had always been formal for us, even before the remarriage. This formality continued, even more so.

The dinner table was elegantly set and the food carefully prepared. My sister and I had donned our very best dresses with stockings. Our hair was done up or in my case...at least brushed out and tucked smoothly behind my ears.

Our first Thanksgiving approached and the day was just as I thought it would be. It was lacking something though, and I didn't know what it was in that moment.

It was laughter and we were about to have a Thanksgiving to remember.

Since my mom worked so hard, she did not have a chance to develop her culinary skills. My stepdad was a career Marine. He was more comfortable being deployed overseas than at home in the kitchen.

It was cooking up to be a megadisaster.

I was in charge of the relish tray. I think I ate an entire can of black olives. My memory blurs a bit here. But, it was a good thing I ate before dinner!

Mom called upon me to say the prayer and I was delighted. I had just finished cheerleading camp and was in a pep rally mood. I sprang to my feet and prayed in my deep, cheering voice, "Thanks for the food, thanks for the grub...yaaaay God!"

My Mom's mouth dropped wide open. You could have fit a whole turkey drumstick inside!

Her face flushed red. "Thank you, Sal. Now, let's eat before it gets cold."

I could tell by her winnowing eyes that she wasn't very pleased with me. So...not formal and lady-like.

It was soon forgotten as the crowning event was brought forth with applause and accolades. The turkey looked so good and my mouth was watering from the heavenly aroma.

But, as we all know, looks can be deceiving.

My stepdad brought out an amazing kitchen gadget, an electric knife. It was avocado green and matched our kitchen perfectly. I remember being so impressed with this new tool.

As soon as he plugged the thing in, it began to hum. It was sure to do the job quickly, I thought. He cut into the bird and as he did, turkey shreds started flying everywhere! It showered down upon everything like turkey scented sawdust, coating the table and the hungry attendees with a haze. Nothing was spared. The plates, stemware, serving dishes and our nice outfits. Good thing I had blonde, turkey-colored hair because it was dusted, as well.

The meal was salvaged thanks to side dishes and a good sense of humor. I must say, that was the driest turkey ever and I was never more thankful for canned, rubberized cranberry sauce and gravy. I was really glad I had a pre-dinner, too. My mom wondered where all the black olives had gone.

A good time was had by all. We remembered all the starving children in Africa and some even appreciated my cheered prayer. Clean-up took a bit longer, but a memorable day of true thankfulness nonetheless.

Happy Thanksgiving to you all!
Pays one point and 2 member cents.


© Copyright 2020. Sally Law All rights reserved.
Sally Law has granted FanStory.com, its affiliates and its syndicates non-exclusive rights to display this work.
Advertise With Us
In a Painted Sky
5-7-5 The changing colours of a sunrise