What we are given by LoannaLois

We do the best we can.

What we are given 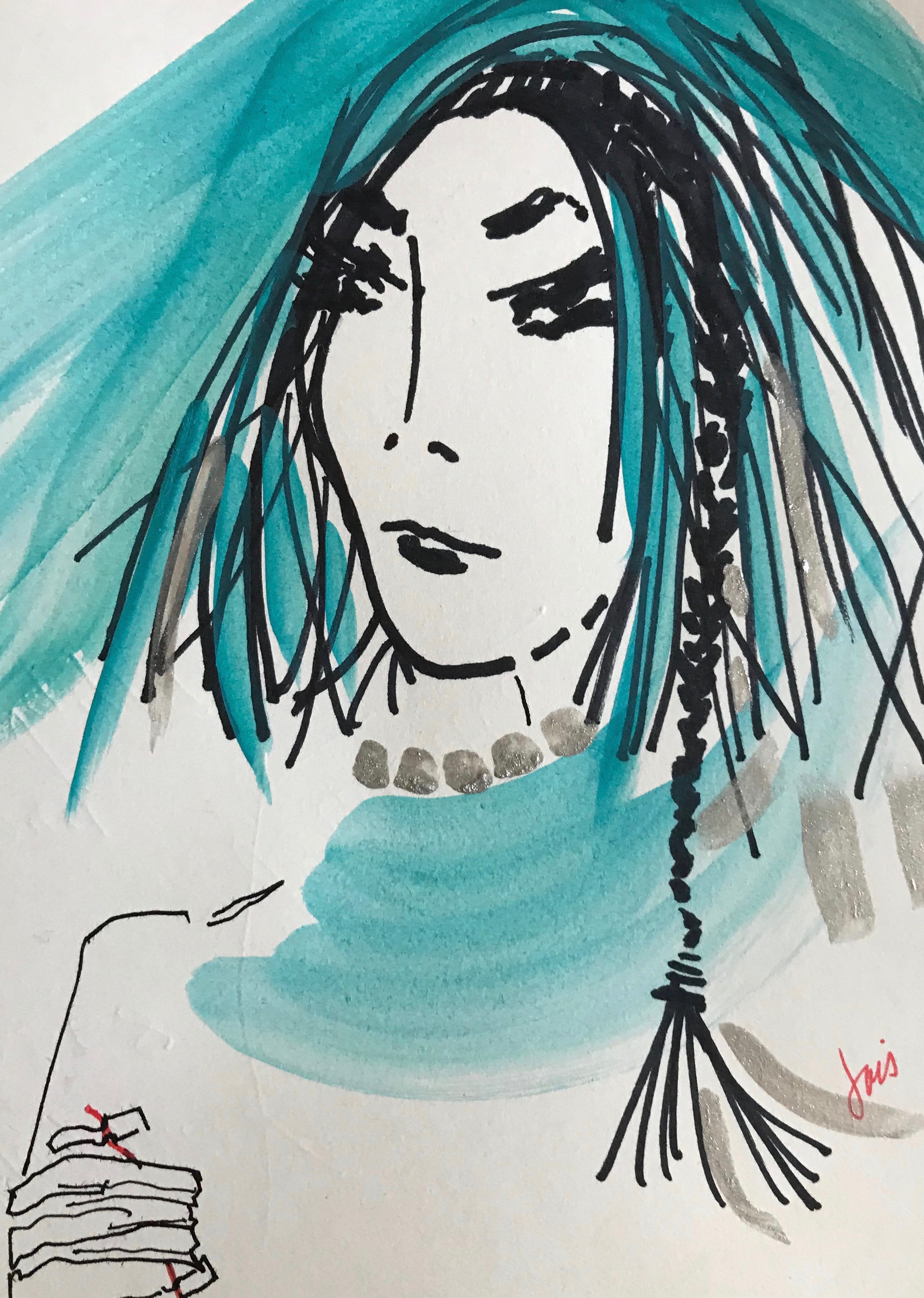 During labor, the Dr. told the nurse I was to have no pain killer; no shot. He was afraid it would slow down the baby who was already in a precarious position. She was past the possibility of a cesarean section.

She came over to help pull weeds and wash off the patio furniture. I haven't been feeling strong enough to keep up. She is a big help to me. How long the way we have come.

My daughter was born forty-six years ago needing a lot of special attention and help, after the traumatic delivery. Her birth was life-changing for all of us. As she grew, so did her
need for constant attention and medication. Those were both necessary to simply enjoy time with her.

My husband was an executive and traveled constantly. He was a wonderful man, but not a family man. I was raising our son and daughter alone. When the words "mental illness" were on the label given to our daughter, he simply could not comprehend, and was seldom a part of counceling or meetings to discuss treatment for Borderline Personality. He just did not want to see what was so obviously hurting her. He wanted her to "get over it".

As she was growing up, with a popular older brother who "could do no wrong", she became sullen, and began living in a world of which we were not a part. She gained weight as if to show us all how she felt. I already knew.

We loved our extended family and tried to get together as often as possible. We moved to various places which made that difficult. Finally, we moved back home so that we could care for aging parents.

As our son flourished and made many friends, played sports, and made perfect grades, our daughter circled all perimeters wondering what the rules were to fit in.

I taught in the high school at that time, so I heard, first-hand, from various teachers and students about her run-ins and difficult times.I eventually gave up my position so she wouldn't feel uncomfortable with her Mom there. Her anger was a constant confrontation in my life.

She graduated and went on to a medical assisting career. Her grades were A's, and I was on the road to some kind of recovery.

The first bandages showed up about the same time we started seeing great weight loss. The cutting was deep and severe. The hospital visits began. As did the attempts to kill herself, the drug overdoses, and my inability to ever leave her alone. Our son hated the attention given and the shadow cast on his family. Their dad lovingly felt the same. He knew she would "get over it"!
And me? He was grateful I was such a great care-taker. I was attempting to care for our parents and our family...and as he would wave goodbye, it was always with part relief and part sympathy in his smile.

By this time, she had lost two hundred pounds and had been living inside her shell of a body, her drug abuse had increased, her hospital visits more frequent, and her pain worsened from mis-treating her body.

The hospital stays became longer. One day, I lived my entire life in a few hours- just praying that she would live. The charcoal that helped pump her stomach covered me. My husband rushed home and was awakening ,finally to the severity of her illness.

She tried several other times, still throwing up; still cutting.

They started putting her on the mental illness ward for her frequent visits. We spent all holidays for fifteen to eighteen years on that floor. Our family would eat together, our friends would be invited, and my mind would wrap itself around it somehow. Our dear son found ways to distance himself from the family unless it was just with his dad and me.

Then, I got a call that brought me to my knees. Her dad and I were told to come to the hospital for a very important meeting with her doctors...and staff.

They began accusing us of hurting her and mistreating her her whole life. She had been ignoring me every day when I came to see her...and this explained it.

She was putting us (me), under her imaginary bus. The psychiatrist who was her primary wasn't buying it, but the staff, literally, was torn in two by our daughter. They believed her because she was sweet and too good at lies. They weren't lies to her, when her world said they were truths.

The nurses no longer were kind to me (except for the few who believed us.) Our daughter had to keep up her pretension so she treated me with fear and contempt.

My husband left me. It was just too much for him. He needed his space and quiet to be who he was. I was expendable. My son tried to support me as well as he could, but I honestly didn't want anyone else wrapped in these flames of hell.

One of her next visits to the ward brought a jarring ring to my cell phone at 2:00A.M. My daughter was caught on the floor of a man's room, without clothing, yelling at the staff to leave them alone.

She was in love. He was a convicted felon, in for an overdose, and drug trafficking. He would be going back to prison as soon as he passed his treatments on ward.

It wasn't over. They were constantly linked by phone. I was warned he was a bad character, and to not get too close or mess with him.

I wanted to give up. My depression no longer had a name, nor was a name needed. I was suicidal now. Thank God my counselor and God got through to me. I was given a new way to reason and work through this nightmare with prayer. I thank God every day for my awakening...and my life.

I started to try to just "be". I knew I had to stop treating my life as if I didn't matter. Unhappiness would no longer be an option to wallow in every day. I would be here for her always.I would miss my husband. Always. I would care for our children, our grandparents, and everything else. I was needed. I was not needed as a martyr.

She called me from prison. She was not a prisoner. She called to tell me she was married. They married in prison. She just wanted me to know. She had just rented a new apartment and I found out why. He was getting out of prison in a week after six years. He moved in with her and I never saw her for months ,except for one evening. She begged him to let me come over. I had to go. He spent the whole evening lecturing me about race, religion, and how I needed to change. He was an angry hostile man who had married and brainwashed my daughter.I did not hear from them for months. He had labeled and disapproved of me.

When she knocked on my door, the shock knifed through me. She was pale, thin, bruised and shaking.

She had come home from work and had found him with some woman in their bed. They had been fighting for months, and he had been beating her, abusing her, selling her jewelry and property. He was an alcoholic drug addict...using her.

My daughter filed for divorce but that was taking away his pay check; meal ticket. He began to follow her around and stalk me. He threatened our lives and our family and friends. She had to leave and go find a place to stay with a friend. My ex-husband came home to help us and then was also followed and threatened. The police were wonderful and tried to give us some security. But he was an angry man and called to tell me I was already dead. My ex-husband also had to find a place to stay...quickly.

It took months of fear and nightmares, but he was captured. He had taken everything she had, wrecked the car, and cleaned out any money she had. She was left with nothing,but she had her life, thank God.

The divorce was another nightmare, but we got through it. This all took a toll on her mental health. One night, she came into my bedroom; my dog woke me up with hysterical barking.
She had a knife. That was it. She was committed for long-term care. I know that it was the disease that carried that knife. My family was not so generous, nor forgiving. It tore our family up. They were afraid to trust her because they had children by then.

I knew she would never hurt them or anyone else now, but I no longer was believed.

My Husband returned after years had gone by. He and she started developing some kind of relationship. We remarried and my son tried to keep communication open.

Again, a lot of time had passed. The family trusted again.

She cannot stay long today. She was a big help. She taped movies for me, folded laundry, and we went to get hair cuts. She is my daughter. She still has an illness. She still needs help. I will help her. I will love her.


This is my story. This is my daughter's story. We made peach pies today.
Pays one point and 2 member cents.


© Copyright 2020. LoannaLois All rights reserved.
LoannaLois has granted FanStory.com, its affiliates and its syndicates non-exclusive rights to display this work.

Advertise With Us
Minion's of Darkness
The Prologue and first chapter.