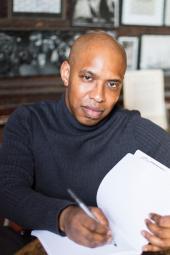 Rainy days and Mondays always get me down.

When I was a kid
I hid
in records

whose grooves recorded
and replayed
the latest grooves
from soul
to show tunes.
Long
before iTunes or Napster,
long
before compact discs or cassette tapes,
I bought records.

To buy more records,
I bought them used and abused
from secondhand stores,
antique dealers,
and thrift shops throughout L.A.
I craved
the Goodwill
of a Salvation Army of shops
to sell me records.

*
I was sixteen in 1980, Los Angeles, when I decided to visit the last thrift shop along my record scavenging route between school and the bus stop. The shop resembled a converted house with its pitched roof and small space. I opened the screen door, exited the light, and entered the den.

"Ha, ha, ha, ha, ha!" The thrift shopkeeper laughed at a daytime talk show on homosexuality. I never paid much attention to shopkeepers, but this one stood tall, big, old, and white to this sixteen-year-old black boy. The shopkeeper rested his head on his hand as he sniggered at the television set on his glass counter which contained jewelry and medals. He stopped laughing and shifted his eyes from the queers on TV to the one who walked in his door.

I asked, "Do you have any records?"

He answered, "Right over there," pointing to cardboard boxes on the Persian rug floor.

I knelt at my first box. My nose inhaled the aroma of old vinyl. Hands searched the records. Flip. Flip. Flip. Fingers found the motion picture soundtrack to Jesus Christ Superstar. It was a double album! My oldest brother took me to see this movie musical in 1973. I have watched it on TV every Easter since.

I next found The Carpenters. This 1971 album put the brother and sister duo on the pop charts with their hits "Superstar," "For All We Know," and, my favorite, "Rainy Days and Mondays (Always Get Me Down)"!

I was on a roll now. If I found these gems among the albums, what gems awaited among the singles? I raised my head from the last box of albums and asked the shopkeeper, "Do you have any singles?"

"Right over there." He pointed to a record rack which stood in the middle of the aisle like a Christmas tree.

A voice behind me warned, "You steal any of my records, I'll shoot you."

I turned. Behind the glass counter, the white shopkeeper aimed a gun at me. The thought flashed my mind, Is that gun real? I saw his eyes and knew. The gun is real.

My Mama never gave me THE TALK, the talk many African American parents give their children about what to do when confronted by a person with a gun, but I instinctively knew not to talk back nor to make sudden moves. I also instinctively knew that I could do everything right and still end up dead. I could do nothing at all and still end up dead. Too scared to run, I continued to browse records. Click. Click. Click.

Waving his gun, the shopkeeper hurled insults. "You Verdugo Hills boys suck. Your people are always coming in here stealing my records!"

Click. Click. Click. My hands shook as I slid a single from its sleeve. I was unable to focus on the artist's name, the song title, the single's condition. I told myself, Andre, whatever you do, don't drop the record, because you'll have to make a sudden move to pick it up.

Finding I would not flee and confirm his suspicions that I was a thief, the shopkeeper struck up a one-way conversation with me at gunpoint. "I have a son. He's in college. He's the quarterback on the football team. Now, he has a colored roommate who's his bodyguard. In fact, all the colored boys on his team are his bodyguards. They make sure no one messes with him on or off the field. Them mothers got shoulders this big." Gun in hand, he stretched his arms wide, and then returned the gun to aim at me.

He said this as if I should be proud that your people, black bodyguards, protected his white son. By aiming the gun at me, the father let it be known that if black bodyguards protected his son, a black gun protected the father. More interested in The Carpenters than in quarterbacks, I feared he would shoot me if I failed to show enthusiasm for his story. I squeaked, "Wow." I examined every single on the record rack without wanting one.

Nodding his gun, the shopkeeper demanded, "Aren't you going to buy more records?"

Is he holding me up at gunpoint to buy records? "I did not find anything I like," I lied. I feared he would shoot me if I did not buy something. I made my first of three dangerous moves. With Jesus Christ Superstar and The Carpenters tucked under my arms, I walked towards a man holding a gun at me. "How much for these albums?"

As much as I dared as I glared at his gun, I protested, "Two-fifty for this? Look at the cover. It's worn around the edges." Actually, I only had two dollars on me. I feared he would shoot me if I returned one of the albums.

"All right, then two dollars."

But we did not shake on it. I then made my second dangerous move. I reached into my pocket to pull out my wallet. The shopkeeper leaned back from the counter, his gun leveled at me. I placed the ones on the counter. "Thank you."

"You're welcome. Have a nice day now, you hear?"

I made my third dangerous move. I turned my back on a man holding a gun at me. I walked toward the door. My back arched. I waited for the bullets, the pain, the loss of consciousness. I prayed, Please, don't shoot me in the back. Please don't shoot me in the back. Nothing happened. I left the man with his TV and his gun as his only companions. I exhaled when I walked outside.

Of all the things I remember, I recall the peculiar quality of the sunlight found nowhere else in this world. The white stucco walls and gray concrete sidewalks reflected sunlight I thought I would never see again. I blinked at the sun and thought, I'm alive.
*

Thirty-three years later in 2013, after the acquittal of the neighborhood watch member George Zimmerman in the shooting death of the black teen Trayvon Martin, I drove four hundred miles to revisit the thrift shop. It is all shuttered now. Papers strewn on the floor. Dust everywhere. The shopkeeper long gone. But the quality of the sunlight remained the same. I looked down on the ground at the shop's entrance and imagined my body lying there with a white outline drawn around it. Flowers, candles, and my favorite records surround me. I remember thinking, I'm glad I'm alive. But I am thinking, too, there are so many people who did not survive their encounters. They are the Trayvon Martins, the Oscar Grants, the Eric Garniers. So many people did not survive. Their names are so many, you can fill the universe with black holes that would blot out the stars. So, I tell my stories, because there are so many people who are unable to tell their stories today.

Video is of me performing an early version of my story in Las Vegas. I apologize for the poor lighting quality. Video contains profanity.

After the July 2013 acquittal of the neighborhood watch member George Zimmerman in the shooting death of the black teen Trayvon Martin in Florida, I began having flashbacks to my own encounter with an armed shopkeeper when I was a black teen of sixteen. I researched my diary and found my September 1980 entry in which I wrote, "I was scared of him . . . I got out of the shop." I also found that the incident so disturbed me that I had suppressed much of it. I dug within myself to recreate what it was like to be a black boy facing the barrel of a gun.

By December 2013, I created a spoken word story about the incident. This story got me noticed and booked to perform from San Francisco to Las Vegas. I open the story with a rap about records because much of my young audience today do not understand what a record is. In 2016, I revived my story with a new ending and performed it in Oakland.

What drives me forward as a storyteller is the certain knowledge that I could have been killed years ago. I am grateful for every day I share my stories.

Thank you for your review.
Pays one point and 2 member cents.


© Copyright 2020. Sis Cat All rights reserved.
Sis Cat has granted FanStory.com, its affiliates and its syndicates non-exclusive rights to display this work.
Advertise With Us
Stars
Oh Starry night