I'm retired from dairy farming. My husband became crippled by a bull three years ago so I am caring for him. Have a lot of time on my hands so I joined fanstory to do some practice writing and maybe write a book later.

A true story about a remarkable horse. 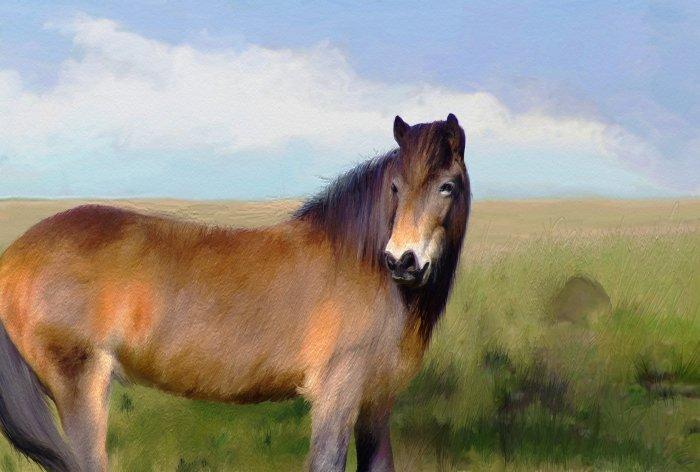 In the fall of 2001, I found my beautiful horse Carmen lying dead in the pasture. I wasn't too surprised, Carmen was in her twenties, and her health had begun to fail during the summer months. The days with my friend and a beloved companion were gone forever. I needed to find a replacement for her, but it wasn't going to be easy. I began my search for a perfect horse.

My ideal horse needed to meet several requirements. First, he or she had to be a very well trained and safe horse. My bones were not as young as they used to be and it hurt more if I hit the ground.

Second, the animal must be spook-proof and willing to accept unusual situations and strange animals. For instance, my friends and I participated in a lot of parades throughout the year and, as anyone knows, they are extremely noisy and often there are strange animals. There are bands, sirens, crowds, and elephants; even a bear in one parade we rode in. Being calm with an accepting nature were the most important requirements for my new mount.

Third, and also very crucial, the horse must have a kind and loving disposition. Children often surrounded our animals and wanted to pet them and sometimes we would take the kids for a ride. A horse with an ugly, mean-spirited attitude did not belong around people.

There was yet a fourth issue that parade riders considered necessary, and that is the overall beauty of their animals. Every rider looked for the most beautiful and flashy animal to show off. My Carmen had been an exceptionally beautiful horse; white with large, round, black and brown spots covering her entire body; somewhat like a Dalmatian dog. It was going to be hard to find a horse the equal of Carmen.

So my search started. I went to horse auctions and saw a few prospects but none that entirely suited my criteria. I answered ads in the papers and on the internet. I lost count of how many horses I looked at and rode or, in some cases, tried to ride. I soon learned that when some folks said a horse was well-broke, it meant you could put a saddle on the animal and get on at your risk. After getting dumped on my butt a few times, I made the owners ride their horses first. I began to despair of ever finding just the right horse.

That's when a friend of mine told me she knew a horse trader with an excellent reputation for honesty and finding good horses for people. I decided to give the guy a try and headed for his place on my first weekend off. I was impressed with the looks of his farm and the condition of his livestock. Maybe I would get lucky this time.

The horse dealer's name was Ken, and he did have several nice looking horses in the corral. Two loud-colored paints, a buckskin, and a chestnut with four white stockings were the first to catch my eye. All four were beautiful animals and one might, or might not, make a great parade horse. My recent horse buying experiences taught me beauty isn't everything. I noticed there was also a nice looking black horse and several varying shades of brown horses scattered throughout the corral. One short, dull looking bay gelding seemed very interested in whatever we humans were doing. I was looking for pretty so I asked to try the two paints first.

Ken saddled the first paint horse, climbed on its back, and trotted the animal around the corral. I could see right away that this horse wouldn't do; his gait was choppy, and it would be like riding a pogo stick. There's nothing worse than a rough riding horse on long trail rides. The other paint horse turned out to be skittish and disagreeable. He made it plain he didn't intend to cooperate in any way. My next choice was the buckskin but, as I started towards him, the little bay gelding cut me off. He put his forehead against my chest and gently but firmly stopped my forward momentum. He was saying, "How about me?"

"Sorry, Boy," I said as I scratched his ears. "If you were a bit prettier and not so small I might consider you. You seem like a nice horse."

I next tried the buckskin and quickly found out he was not broke well enough. The black horse seemed very well mannered and gentle, with a nice smooth ride. For a minute I thought maybe I had found my horse; until I looked at her teeth and found the animal old enough to be my grandmother in horse years. I sighed, another wasted day in my hunt for a horse.

"Why don't you take that bay gelding for a ride," Ken suggested. "He's been following you around all day begging for some attention. Besides, my kids have been riding him and they love the horse. He is gentle and loves being around people, give him a chance."

Needless to say, I was quite skeptical. The gelding was small, maybe fourteen hands at the most. His appearance was okay but nothing exceptional. He had an average looking head with big kind eyes, but his short neck and massive shoulders gave the impression of dumpiness. Not parade horse material but he might make a trail horse. I decided to try him.

To my surprise, the gelding was an even smoother ride than my Carmen horse had been. Also, the horse was trained far beyond my expectations. He changed leads at the slightest signal and turned on a dime. His sliding stops were impressive, to say the least. He would side-pass either direction with extreme ease and was, in general, a fun animal to ride. Someone must have put a lot of time and effort into training the little gelding. The horse's only flaws were that he wasn't pretty or very tall. Nevertheless, I decided to buy him; I knew he would make a superb trail horse.

I named the horse Pete because it fit. Pete is a plain and straightforward name, and the gelding was a simple, uncomplicated animal. There wasn't anything fancy about Pete; he enjoyed life and lived to please. It didn't take long for Pete to work his way into my heart. I rode him on long trail rides and found myself amazed at the things the little gelding could do. No matter what I asked of Pete he gave me his very best. Whether it meant crossing deep streams or climbing steep hills, he never hesitated or said no. Also, I noticed the hard work improved Pete's looks. He gained more muscle and lost some of the flabbiness that made him look so dumpy. He would never be a beauty, but Pete did have a new athletic look about him.

It came time for the Asparagus Parade, our first parade of the year, and I still hadn't found another horse. Pete, being the only horse I owned at that moment, left me with no choice but to use him in our group. There wasn't any way to change Pete's plainness, so I set about dressing him up as best I could. I put my fancy parade saddle, pink leg wraps, pink saddle blanket, and pink hat on Pete. It helped, but he still looked like what he was; a plain looking, dull colored, horse dressed up fancy. I sighed, it wasn't my usual flashy style, but it would have to do.

Four other women besides me rode in our parade group. We called ourselves the Pink Posse and dressed our horses in neon pink while we wore pink fringed shirts, pink hats, and black pants. We won a lot of trophies because of our unique costumes and excellent horses, but mostly, we simply had fun.

I noticed some of the girls from the other groups smirking as I brought Pete out of the trailer. They figured they would beat us this time as my little horse didn't hold a candle to their flashy mounts. Well, winning wasn't everything, I refused to be ashamed of my friend, Pete.

We lined up for the parade and the band started playing. What happened next astounded everybody, especially me. Pete arched his short neck and began to prance, literally dancing down the street. Pete would walk sideways one way for a few minutes, then swing around and go the opposite direction. It wasn't anything I told Pete to do, he acted on his own, I was merely a passenger. The crowd loved it, and Pete loved the applause, he had the greatest time of his life just showing off. To say I was flabbergasted would be the biggest understatement ever.

When the parade was over, I received more compliments than ever before. To top it off, Pete won the trophy for best horse, and our group took the first place trophy. The girls in the other groups, with their flashy horses, were green with envy. I'm sure they were embarrassed to have been beaten by such an unremarkable little bay gelding. As for Pete, he considered the praise his just due while eating cotton candy the children offered him.

Pete was the most remarkable horse I ever had the pleasure of owning, or maybe he owned me, I never figured it out. I could ride Pete with no control of any kind and seldom used the reins when I did have the bridle on him. We were so connected it almost seemed Pete read my mind most of the time. He did anything I asked him if it were within his power to do so. One day I put a harness on Pete and hooked him to my driving cart. He looked puzzled, but after I had led him a bit, he seemed to say, "Okay, this is no big deal, let's go." From that time on, Pete was a driving horse too.

Pete was twelve years old when I bought him, and he lived here on the farm until he died at the age of twenty-four. I have no horses now and could probably never find another like Pete. Pete taught me a good lesson about not judging people or animals by their appearance. Beauty is only skin deep; it's what is inside a person or animal that matters.

Pete was a different sort of horse. He acted more like a dog than a horse. Pete wasn't a pretty horse but he made up for it with his gentle nature and wish to please. I couldn't get his picture to download, but I found a picture in FanArt that looks exactly like Pete.
Pays one point and 2 member cents.

prettybluebirds has granted FanStory.com, its affiliates and its syndicates non-exclusive rights to display this work.