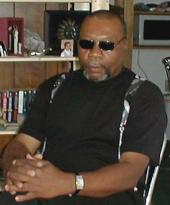 I was bred an East Baltimorean but thanks to continual post-mid-life crisis I found myself co-existing with my dysfunctions in Alaska. I live my life outside the box until it gets too cold, too bug-infested or too ridiculous. I scribble poetry, peck - more...

Baggage... It's a heavy load to carry


Love is such a beauteous thing. A thing to be found and cherished. A thing to be held in a vibrantly beating heart. Love is what Life is all about... or maybe it's the other way around... HOWEVER...

Love Story Baggage... both the poem and Word Up... is inspired by a true event. I've changed the names to protect the guilty (as we all usually are in B-More), and this is not a gender-based story. Both men and women have been known to pre-judge and rage-on based on past experience.

"What up, Darnell? When you get back in town?"

"Little to the left, Cousin, with a slight twist but I ain't shooting blanks yet."

"Then you best be careful where you shooting. Fertility can be hazardous to your paycheck."

"Thanks for the advice, Darnell. The IRS already chewing on my check like a cow does on its cud. How's Alaska?"

"Like a cow chewing on its cud... and I'm the cud. Who you hanging with these days?"

"Up 'til a week ago the love of my life was Linda. You remember her? She was a year behind us at Lake Clifton High."

"So why the Splitsville act, brother? Were you dipping in another well?"

"I was in love, Darnell. My sun rose and set on her lusciousness. She was my forever and a day."

"Damn, dude. You got it bad. So, if I'm not prying, why are you two no longer a couple spinning Love like it's a Luther Van Dross CD?"

"She couldn't get rid of the previous men in her life, cousin."

"You mean she was back-sliding? Chasing her yesterdays and sampling the memories?"

"Not the way you thinking. Turns out she had a series of lovers that didn't mind loving more than one at a time. She evidently been screwed over so much that her 'pre-me' dudes were using a ratchet drive to save time and energy in their screwing."

"But you didn't screw over her, Butch?"

"Naw, Darnell, I loved her in a serious way. That chocolate-drop was not just my heart, but the only thing I wanted to nibble on night, day and every crevice in between."

"You tell her that?"

"Until the cows came home, my brother. I crossed my heart and hoped to die with every word I uttered."

"Like using an eyedropper to put out a forest fire... with or without a Smokey the Bear commercial."

"So she turned you into the pre-you-dudes?"

"Quicker than Doctor Frankenstein did with his Monster."

"So you finally split the scene?"

"Didn't have a choice, bro. First I avoided all our female friends from babyhood on up. I stopped speaking to women at parties, dinners and church outings. I avoided women at work so much that co-workers thought I was gay. I wouldn't answer the door if a deliverywoman rang the bell. But even those dramafications didn't work. Far as she was concerned, I was screwing anything with tits and a happiness-below-the-belt garden."

"Man, I even gave up Lucy to avoid her accusations."

"No doubt. People thought I was growing a 'fro on purpose. And you know Lucy's husband, Lyle, is six-five, two-fifty and got muscles on his muscles. Only a fool or a suicide-watch would get on his wrong side."

"So you finally called it off."

"I had to Darnell. I still loved that woman, but she was driving both of us bat-shit crazy. Sooner or later I was gonna go looking for a set of soft arms that I could relax in. And then she'd have her self-fulfilled prophecy. Or the shit would eventually take me to the point of hating her and then I'd have that bitter pill to swallow on a regular basis."

"She accused me of leaving her for every woman not tied down by life-support."

"What did you say to that?"

"Nothing. It's her trip now, cousin. I got tired of carrying her baggage."


So here's the companion piece, the full story... nothin' says everything like two brothers rappin'. True stories don't get more true than this. Maybe if we dump our baggage after a bad run... the next run got a better chance of being good. I'm not sayin' you gotta let people walk on you... I'm sayin' don't think you're bein' walked on before the other person takes a step.

Thank God, this little episode is over. Now I can get back to 'Noir' where human nature is 'shoot-em-up bang bang' and the only tough thing is telling the good guys from the bad... and the bad girls from the waste-of-time girls!
Pays one point and 2 member cents.