Chapter 5 - A few lines about my preteen and teen years

Growing up fast in Pacas 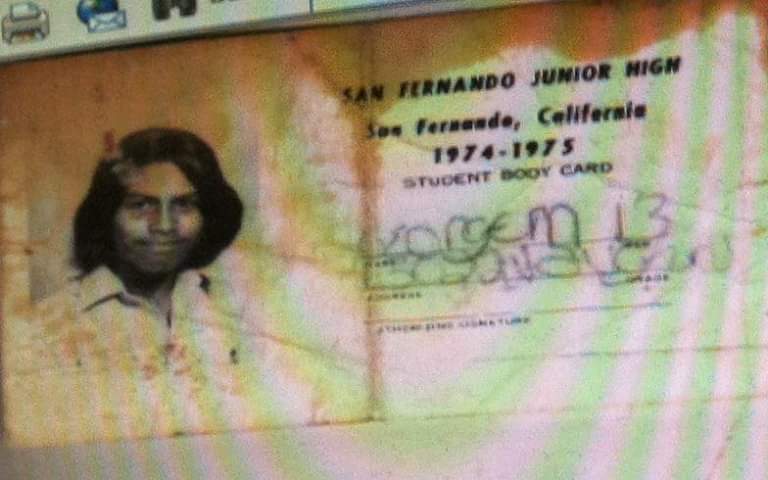 "Growing up fast in Pacas"

It was 1966, I was just five years old and in kinder garden, she lived up the street from me about two houses over to the right of mine. My first crush was a girl named Caroline and I can only remember she was cute but had some bigger brothers that did not seem like me too much.
I guess they were just being protective as elder brothers always are. No worries though, I also had two bigger brothers and a few older cousins that lived a few blocks away if I needed them, I knew even then that they would always be there for me as I was for them. Although being the youngest of this group it seems they did not want me hanging around with them too much.

You had to be fast on your feet to get by living here in Pacoima and I was, too fast for my own good perhaps, as I found out one day while I was in the third grade when I ran into a volleyball net one morning before school while playing freeze tag with some friends and was thrown backwards onto the pavement.
I was knocked out cold and had to be carried into the nurse's office by a teacher, I found that out after I awoke there a short time later.

By the time I was eight years old in 1969, two of my elder cousins "Rojo" and "Crissito" found a way to dare my elder brothers and I to go on some missions to "obtain" bikes and bike parts for the chopper style stingray bikes they were making and selling to the neighborhood boys to get a few bucks to spend. Money was a rare commodity for kids and teens growing up around these parts of Pacoima, California.

For my two elder brothers and I, hanging around with the Homeboys would be secondary to helping our Hefito keep his landscape and gardening business afloat. My Hefe was an old school Mexican to the bone - hard working, hard drinking and did not put up with any bullshit from anybody.

On night after we came home a bit late after watching him drink with some of his compadres, we came across a couple of Nightwalkers hanging around our block and a bit too close to our garage for my father's liking.
As we opened the garage one of the Nightwalkers took a few steps toward us and asked if we had a light for his smoke.
My father a bit tipsy and always cautious, got out of the truck and said "yeah come over and get it", he then pulled out his 4 foot long machete from under the driver's seat and struck it across the sidewalk making a chingo of sparks. The Nightwalking then took off down the street saying "vamos este Viejo esta loco".

This I believe is why I developed a work hard and play harder mentality. It also further exposed me to the duality of life as my father who I knew was a good hard working man, was battling the demons of alcohol.

In 1973 by the age of twelve I had Pacoima 13 tattooed on my left forearm before my thirteenth birthday by "Blanca" an elder Homegirl from the "Flats" after a beer and wine "run" during a ditching party I attended back then. My familia was pretty well known and connected through Elder Cousin's so I did not have to be "jumped in" or do anything crazy to prove myself like some others who joined the Trese.

The neighborhood was growing fast but not yet divided by multiple street gangs like those in Los Angeles, everyone around this area would either be from Pacoima 13, Pacoima Flats, Little Pacoima, belonged to Brown Social Club, the older The Nightwalking or one of the many car clubs here in the San Fernando Valley.
In fact back then the Brown Social Club had members from both Pacoima and San Fernando, this would not last very long as the SF vs. Pacoima rivalry would soon begin blowing up again.

Unlike Los Angeles area gangs back then one could roll across various parts of Pacoima without worrying too much about crossing another gangs territory, some could even party with different Homeboys in the various parts of Pacoima without many issues.
This also would not last very long as the population continued to grow and the gangs here would continue to become more territorial and numerous like those found in the Los Angeles area.

As my brothers and I grew to become well known in the neighborhood, my father would also talk with some of the Homies we hung around with and loosened up a bit about the neighborhood, he would even drop us off at club meetings and parks where we played street football games against other clubs.
I still remember the day he dropped us off at Palmas Park in San Fernando, to play in a football game against some vatos from San Fernando, a Homie "Josh" was injured that day and got paralyzed from the waist down. A street ball game against a rival was serious business back then and played at various neighborhoods.

The old man would always warn us to be careful and not do anything stupid but, as a young teen growing up in the hood you begin to think you know everything there is to know and "don't need any stinking advice", especially from a dad who grew up in Mexico in the 30's and 40's. Dad's basic rule was "under my roof, under my rules".
With that attitude it would not be very long then that I would start to drift away from home and begin hanging out with the wrong older Homies and get into some kind of trouble.

These also were the last days of going "one on one" when any problem broke out between rival groups. Street fights with chains, bottles, bats, or knives were the norm with an occasional shooting rather than constant "drive by's" that would soon become thee way to handle business. Inter-city rivalries were constantly getting deadlier.

By 1976 and in the tenth grade, I would soon quickly have a few scrapes with the law to include stays in Central in L.A. and Los Padrinos in Downey, both juvenile facilities . In fact, about a year earlier my bother Jimbo and I had spent a few days in Central after our father - in order to "teach us a lesson", refused to come get us from LAPD's notorious Foothill Division as a result of some (unrembered) arrest.
I also had an older Homie who liked to "borrow" cars to get from one side of town to the other and one evening after partying a bit, while strolling through Arleta with him he decided to "obtain" a car by pulling a hand gun on a couple making out in front of a house. Not having any advance warning I had to jump in the car also or be left behind. We headed for the Flats and soon the helicopter came with search lights - I got away but a few homeboy hanging out took the ride to Foot Hill Division as a result.

Needless to say a bit later, one day while installing a radio in my brother's car in front of my dad's house, a Black and White pulled up and I was arrested for Grand Theft Auto (GTA).
I spent a month in Juvie bounced between Central and Los Padrinos, while I was going to court for that incident, someone had another Homeboy "speak" to the owner of the car and advised him not to press any charges or show up to court.

My Public Defender, a young woman who years later would become a "celebrity" advocate for women rights, got the case dropped easily.
It turns out she also did me a huge favor back then by having my juvenile arrest records sealed by having me and my Pop's sign a few forms.
This would become a huge break for me a few years down the road when I needed to get a security clearance from an aerospace company.

Back then there also was a few organizations that helped some of us young gang members to stop fighting, learn some useful skills and get some work through some summer jobs and other programs.
That was how I would come to meet an older biker that would later become a well known actor in various movies. As a young impressionable teen, I thought the distinctive Hat Lady" tattoo he had was awesome - so I asked him something one day that would stick with me for years to follow; I asked him - "What did that tattoo cost you to have inked"? He simply replied "Five years".

One of the cool things that I do remember from back then was the "Kegger" parties with live music thrown by some of the Car and Street clubs at that time. Some free concerts were also occasionally thrown at Hanson Dam during the summers back then and you could drop some acid, sneak some smoke and drink in to enjoy there also. There were some fights at these but, the organizing clubs would regulate those parties pretty well back then.

During summers one could also gather some of the Homies and go to the beach or places like Orcas Park, and the Tujunga Wash to party, BBQ and play in the running water. You could also rent a horse to ride in the stream area behind Orcas back then too if you had the dinero.

All characters appearing in this work are fictitious. Any resemblance to real persons, living or dead is purely coincidental.
Pays one point and 2 member cents.

QC Poet has granted FanStory.com, its affiliates and its syndicates non-exclusive rights to display this work.
Advertise With Us
A Planet in Distress
We all suffer to some degree.

Pays: 8 points. and 84 member cents
Copyright © 2000 - 2020 FanStory.com. All rights reserved. Terms under which this service is provided to you. Our privacy statement.
top
You Have No Rank
Share 4 posts to be ranked.