Sasha lives in Mazatlan, Mexico and has no plans to return to the US. Her life in Mazatlan provides an endless supply of subjects for her Smurphy Rambles. My favorite writers are Ernest Hemingway, Fyodor Dostoevsky, Mark Twain, Fan Story's own - more...

Valerie learns her father was molested

A chapter in the book A Leaf on the Wind


Photograph of Auntie Miriam taken in 1936. The author has placed a warning on this post for language. 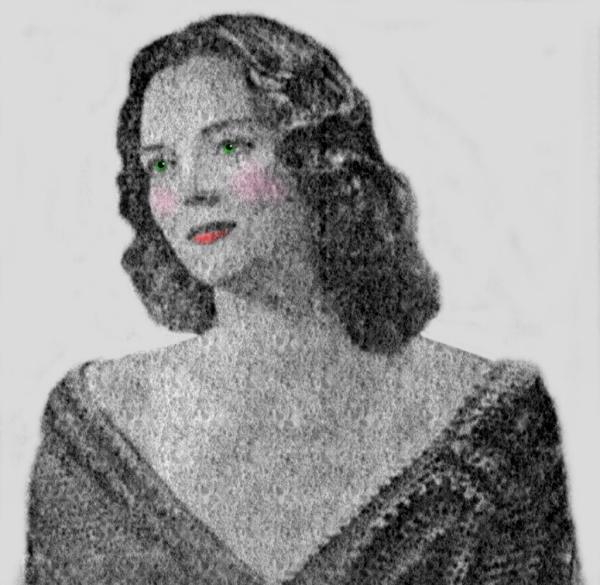 "If you reveal your secrets to the wind, you should not blame the wind for revealing them to the trees."


In early 1960, Auntie Miriam was diagnosed, and treated for breast cancer.  She became the poster child for experimental treatment.  Other than an automatic radical mastectomy, years of chemotherapy, and massive doses of radiation, crossing your fingers was pretty much all that was available.  After years of radiation, she had completely lost the use of her right arm.  It hung from her shoulder like a dead weight, mutilated, and useless.

Auntie Miriam shut the door, walked over to Teresa’s bed, and sat down.  She patted the bed with her good arm, signaling me to sit down beside her.  We sat in silence for several minutes before she finally spoke. The tremble in her voice told me she was nervous.  So was I.

"When Ronnie was seven or eight, he came home from school every day, locked himself in his room, and refused to come out for hours.  Nothing Mike or Bea said would make him come out.  Once, Mike broke the door down and found your father curled up in a corner on the floor sobbing like a baby.  Bea tried to get him to tell her what had happened but he refused to say anything.  No one knew what to do.  Your uncle Terry and I were too young to understand what was happening. I only remember Ronnie cried every time he came home from school.

“Mum, as you know, was seldom around.”

“During the week, she lived uptown in the big house with grandmother and grandfather, only coming home on weekends to deliver the week's groceries.  Dad was either at the neighborhood pub or passed out on the couch, so it was left to Mike and Bea to take care of us."

I was sure I knew the answer, but I still had to ask the question.

"Did Daddy ever say why he hated school?"

"Not right away,” she replied.

“At first, Mike and Bea assumed Ronnie was simply having difficulty adjusting to the nuns' strict style of discipline.  I don't know if you are aware that your father was a very sensitive boy.  According to Bea, when he was little, all he ever talked about was becoming a priest when he grew up.  But that all ended one day.  It was as though one night he went to bed a saint and woke up the next morning a demon."

"You father was filled with so much anger and rage, it became more and more difficult to get him to go to school,” Auntie Miriam said.

“When he was eleven, Ronnie finally put his foot down and refused to go to school.  Your father and Mike got into a terrible argument that ended in a violent fistfight. They said terrible things to each other."

"What did they say?"

“Ronnie told Mike that Father Browne had been buggering him for years.”

"Mike and Bea were furious and told Ronnie he would burn in hell if he told anyone about father Browne,” Auntie Miriam said.

“They both threatened to never speak to him again if he didn't keep his mouth shut.  Mike and Bea told Ronnie they wouldn't allow him to spread such ugly rumors about a man of God.  They refused to believe a priest would ever do anything so evil to a child.  They said if Ronnie ever spoke of it again, they would tell everyone he was a queer.  At the time, I did not know what that meant."

For a brief millisecond, I felt compassion for the man I had spent my entire life hating.  We were both victims of our family's selfish need to hide the truth behind lies.

Auntie Miriam paused to wipe the tears that had begun to stream down her cheeks.

"Why would Uncle Mike and Auntie Bea say something so cruel to Daddy?" I asked.

"We are Catholic.  Bea and Mike simply could not believe Ronnie was telling the truth.” Auntie Miriam replied.

“To do so would mean admitting a priest was capable of molesting a child. They just couldn't allow that."

Auntie Miriam bowed her head and in a voice filled with shame added, "Back then people believed if a woman was raped, she must have done something to cause it, and if a man was raped, he was a queer."

"But Daddy was a child,” I protested. “How could anyone blame him for what happened?"

"That's just the way it was back then,” she explained. “Bea and Mike were terrified of the shame that the family would endure if Ronnie told anyone what happened.  Your father was so terrified people would think he was homosexual, that it became his life's mission to prove that he was not.

After their fight, Ronnie changed.  He quit school and never set foot in a church again.  Desperate to prove he was not queer, your father focused all his anger and attention on girls. He would intentionally come into the bathroom when Bea or I were in the bathtub.  It got so bad that one of us had to guard the door when the other was in the bathtub.  Sometimes he would touch us in ways a brother should never touch his sisters.  If we brought a girlfriend home from school, your father would corner her and try to kiss her.  Sometimes, he would put his hand down her blouse.  We all told ourselves Ronnie was just trying to be funny, but when he started paying too much attention to young girls half his age, we knew something was very, very wrong.  By the time Ronnie was sixteen, he had a reputation as a real ladies man.  He drank like a drunken sailor and got into fights with anyone who crossed him."

The reality of what Auntie Miriam was telling me was beginning to sink in.  However, learning she knew about Daddy's deviant behavior long before I was born, infuriated me.  I promised Auntie Miriam I wouldn't hate her if she told me the truth, but I wasn't sure I could keep my promise. The momentary compassion I felt for my father disappeared, and in its place was the familiar rage I had felt my whole life.

Suddenly the door flew open and Auntie Bea stormed into the room. Furious, she started yelling at Auntie Miriam.

"Miriam, how dare you talk about Ronnie like that; he was never molested by Father Browne. My brother was a saint. He never did any of the things you say he did."

Auntie Miriam stood up, and glaring at Auntie Bea said, "Shut up Bea! As God is my witness, you and I both know Ronnie was a sick, pathetic son-of-a-bitch. If we had stood up years ago, we could have prevented Valerie from years of hell at his hands. Instead, we all stood by silently and let it happen."

Auntie Bea covered her ears and began pacing back and forth.
"Valerie, you don't understand.  Ronnie was a sweet little boy.  He was going to be a priest, for God's sake.  I was his big sister; it was my job to protect him."

Furious, I yelled, "And what a great job you did!  How proud you must be."  My blood was boiling.  "What about me? You obviously didn't think I needed protection!"

Auntie Bea completely ignored what I said.  Instead, she began to verbally attack me, calling me selfish and unfeeling.

"Valerie, he was your father,” she reminded me.

“You have to understand, it wasn't his fault. Why are you so selfish? Why can't you just forgive him?"

"First you tell me it never happened and next you ask me to forgive him,” I pointed out.

“You can't have it both ways. Damn it, make up your mind!"

I refused to let Auntie Bea have the last word.

I took a deep breath before continuing.

"Daddy was a sick son-of-a-bitch and you knew it."  I screamed.

“We all knew he was sick!  What the fuck is your excuse?"

Auntie Bea grabbed me by the shoulders and began to shake me violently.

"How dare you talk to me that way! You have no idea what your father went through.  Without me, he wouldn't have survived.  I did what I had to, and I would do it all again without a second thought. So get off your high horse and stop feeling sorry for yourself!"

I couldn't believe what Auntie Bea was saying. She actually believed she had done nothing wrong.

"You were not trying to protect Daddy,” I told her.

“You were only trying to protect your precious church and your precious family image.  You couldn't handle the shame of anyone finding out a priest had molested a little boy.  You were only worried about yourself.  I wouldn't be surprised if you thought Daddy was homosexual.   You blamed daddy, not the priest, didn't  you?  How dare you call ME selfish?  Take a look at yourself in the mirror, and you will see what I see, an ignorant, selfish bitch who never gave a damn about anyone but herself.  I may or may not decide to forgive Daddy, but I will never, ever forgive you!"

Speechless, Auntie Bea collapsed like a rumpled sheet onto the bed. Auntie Miriam knelt down and put her arm around her sister.
As I walked out of the room, I could hear them both sobbing.  I was not ready to forgive either of them. For now, they would have to find forgiveness elsewhere.

I left without saying goodbye to anyone. On the way home, I stopped at a local bar and had several drinks. I woke the next morning with a terrible hangover and no memory of how I got home.

Earned A Seal Of Quality


Denial is a complicated web woven by ignorant, frightened people unable to face the truth. My family may have been Catholic, but their true religion was denial. To this day, I still wonder why I was the only one to speak out. Everyone knew the truth, but only I stood up; a nearly impossible job for a little girl surrounded by such powerful people.
Pays one point and 2 member cents.