I love reading and writing. Even though English is not my mother tongue, I am here to learn. It is by learning that we grow. So, I want to grow mentally and spiritually. Therefore, please inform me about my shortcomings and I will be grateful to you. - more...

He is a top ranked author and is currently holding the #58 position. 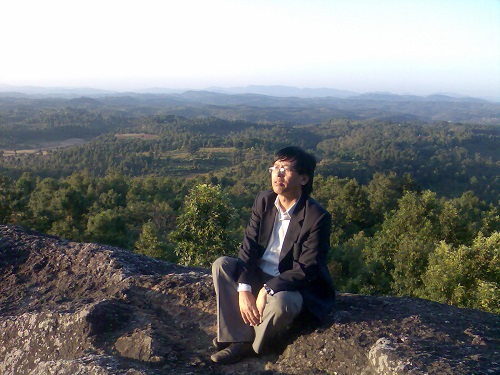 I sat on top of the gigantic Boulder 100. My brother clicked pictures of me on our mobile phones. This was one of the best days ever in my life.

How can sitting on top of a gigantic rock be the best day of one's life? It is difficult to explain, but let me try.

My father was a simple mission morning school teacher. He led a very simple life. His salary was meager, but he sustained himself and his family by working in his field and doing many menial jobs.

Every winter holiday, he would come home and take me to his farm in this small village. He would teach me how to work in the field and learn important things in life. He taught me the dignity of labor and we should respect even the lowliest of jobs.

Around the paddy field, my father had converted from a swamp, there were many tropical trees. Some of these trees were big, and some were small. These trees blocked the sunshine to the paddy field.

Therefore, we had to fall these trees. Paddy needs a lot of sunshine. If the paddy did not get enough sunshine, it will grow tall but with less rice. It would also take much time also to ripen. The paddy would take so much space but it will bear less rice. The farmers knew the value of sunshine and its power to their plants. My father taught me this.

So, we fell all the trees, big and small, which block the sunshine to our paddy field. For smaller trees, we used firewoods. But for bigger trees, my father had a plan. He would burn those trees to convert them into charcoal.

Every day, my father would rise early and go to the paddy field to cut the trees. I would cook and look after the house and then joined him after I finished the household chores.

To make charcoal was a tedious job. Each log had to be of equal length. Then you have to dig a pit. It was not an ordinary pit, but a pit big enough for these logs. Then, every log had to be arranged neatly. There should not be any hole, space, or opening between logs so that no carbon escaped.

For any space, opening, or holes, we filled with loose soil or green leaves. We filled these things tightly so that the carbon would not escape and the wood would turn to charcoal. If any carbon escaped while burning, the wood would turn to ashes rather than charcoal. That would be an enormous loss to the charcoal burner. So, his whole efforts would be useless and turn to ashes.

Once we put the logs neatly, we covered them with green leaves and soil. From below, we made a hole to put the fire to burn. Once the fire burned, we close the opening and leave everything. Every morning, we would go to inspect the charcoal burning place. Just by looking at the top, the charcoal-burner knew exactly the condition of the charcoal burning inside.

In case the top became too saggy or too down, then he knew that the carbon escaped and the charcoal would be less or turn to ashes. If the top was firm and a tiny amount of smoke came, then he knew his efforts would bear fruit. There was a distinct smell from the burning charcoal.

Every Saturday, we would put the charcoal in the jute bags and carried it on our backs to sell in another village about a one-hour walk. My father would carry the bigger sack while I carried the smaller sack. After selling the charcoal, sometimes we would come back home to our village or go back to Ageville.

One particular Saturday, we carried our sacks of charcoal, my father a big one while I carried a smaller one. Halfway through to the next village, there was a gigantic boulder. On the base of this giant boulder, there was a traditional resting place.

We put our sacks of charcoal and rested there for a while. While we rested there, the curiosity got the better of me. People out here called the giant boulder, Boulder 100. So, I asked my father why the people called this huge rock the Boulder 100.

"On the face near the top of this boulder, there was the numerical 100. Nobody knows who wrote it or how it was there. I think it was a natural phenomenon, but some people told that a foreigner climbed this rock and wrote 100 there as the boulder is huge."

"So, there was somebody who climbed this huge gigantic rock?" I asked.

When someone told us, kids, it was impossible, it made us think. In my boyish thought, I asked this question to my father:

"Why is it impossible to climb?"

"This rock is gigantic. Its slopes are slippery and sheer perpendicular. I was told that there were people who tried but they could not."

As a young boy, I could not accept no for an answer. So, I told my father,

"Pa, one day I will climb to the top of this rock." I never knew how I would climb the gigantic rock, but the words just came out of my mouth.

My father just smiled and said,

With that, we continued on our journey with charcoal sacks on our backs.

I received the news that the daughter of one of our relatives who stayed in Ageville died. I called my brother and together we attended the funeral. We had not visited Ageville for a long time and this was an opportunity for us to see the place we grew up and meet with our relatives.

We drove up to a certain point and then left our car. The road was there but not fit for my car. Therefore, we walked. The month was October, and the sky was clear. There was no cloud, and the scenery was too beautiful.

We walked along the slippery road, reminiscent of the old days. In the old days, the path was small, zigzag, and longer to walk along the cliff of the hill. But now, they have constructed a road but yet to be tarred. Jeeps and four-wheelers can go, but not yet for ordinary cars.

We admired the views while we walked. The valley below was so beautiful. There were paddy fields and small villages. The houses dotted the valley below. Then we reached the point where the gigantic rock protruded. The kutcha road was from the upper side next to this rock.

Our relatives were extremely happy to see us. It was a long time ago since we went there. The village had changed completely. Before there were only thatch huts but now almost all the houses were covered with corrugated iron sheets. Some houses were constructed of cement.

When the funeral was over, we came back. We wanted to climb the gigantic rock or Boulder 100 by the side of the road. This would be a chance of a lifetime.

While we were talking along the way, we reached Boulder 100. It was difficult to climb but we could manage. We sat on top of the boulder. While enjoying the view and the breeze, I asked my brother to take pictures with our mobile phones.

I sat there along with my brother. I looked down at the sheer size of this enormous boulder. From the base of this boulder, it would have been impossible to climb. However, when they constructed the road, they dig the hills from above the boulder. They filled the gap between the road and this Boulder 100 with small rocks, soil in such a way that it is now possible to climb to the top of the boulder.

While I sat there, I remembered what I told my father almost forty years ago. Excitedly, I told my brother about the promise I made to my father that one day, I would climb to the top of the boulder. Today, that promise became the reality.

Then we discussed our lives. We came a long way from what we were before. My brother had done well despite his health. I had also done well. My brother reminded me of being the charcoal burner's son to being in the senior management position of the biggest bank in the country.

While I sat there on top of the Boulder 100, I could not help but think about the changes in this world. In my father's time and when we were young, we had to walk and carry on our backs those heavy loads. Now, the road was constructed, and it was easier to walk.

But today was different. My brother had reached the position that he did not expect to reach working in the office of the central government. And for me, from the charcoal-burner to being a banker, was certainly beyond expectation.

This is a true story.
This picture was taken on my mobile phone on top of the Boulder 100
Number of words 1629
Pays one point and 2 member cents.