I'm here to learn, to share and perhaps to get more exposure for my books

He is a top ranked author and is currently holding the #63 position.

He is also an active reviewer and is holding the #82 spot on the top ranked reviewer list.

When I was young I earned a bow and arrow

by T B Botts 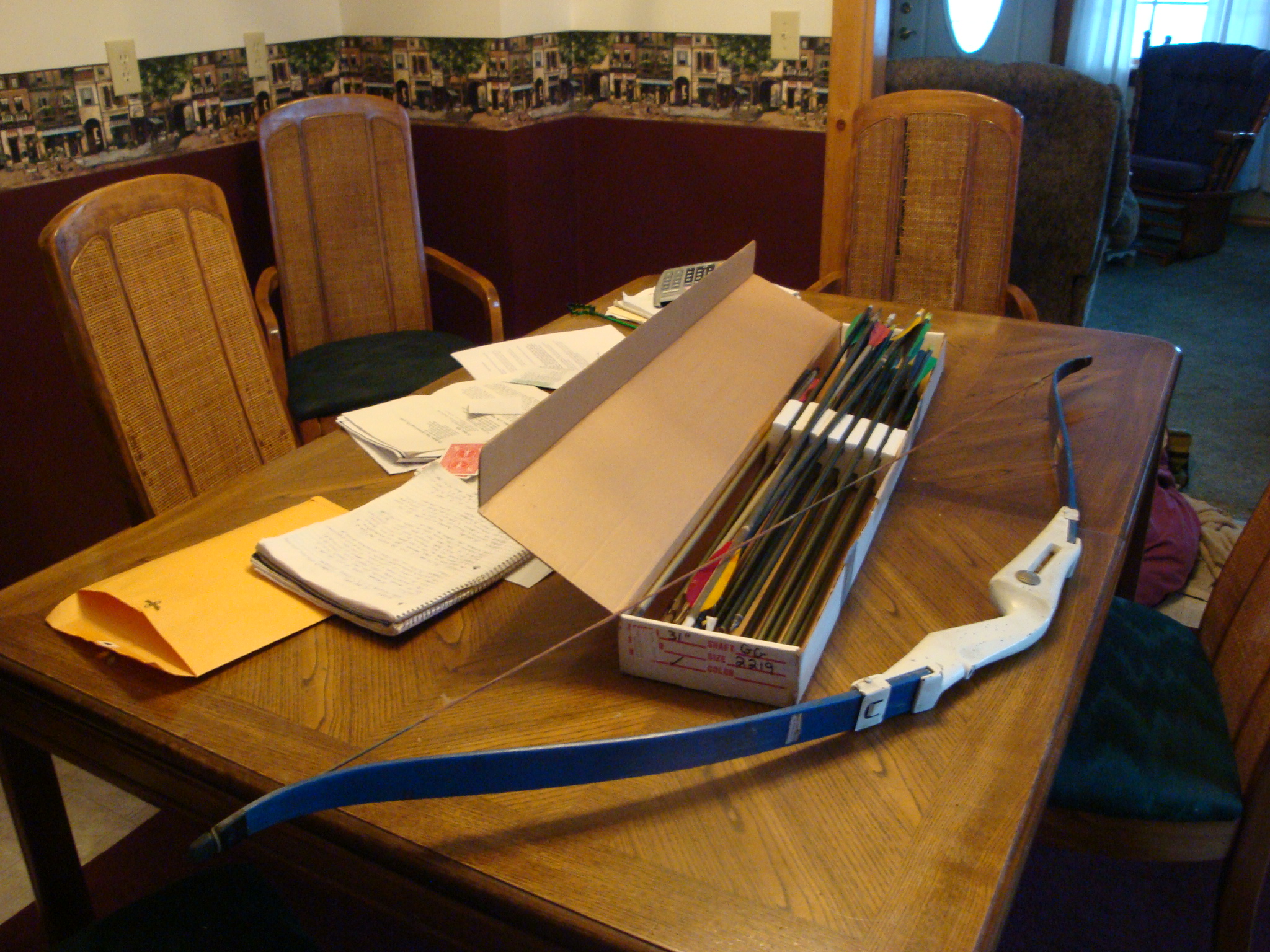 When I was a kid I joined the Cub Scouts. I didn't really want to; I think my mother made me. She probably thought I had too much time on my hands and would only get in trouble if left to my own devices. She was probably right in feeling that way, but little did she realize that she had opened Pandora's Box.

I can't remember much about being in the scouts. The mom of one of the kids at school was the den mother, and we used to have to go to her house for meetings. In retrospect, I suspect she was asked to be the den mother and agreed without realizing the extent of time or the amount of preparation that would be needed.

At one of the meetings I remember standing over their sink with some ice cubes and salt and a string. We put the salt on the ice cube, and set the string on it and when the salt melted down so far, the string was embedded in the ice cube when it froze again. Even as an ignorant little kid I wasn't any too impressed. Afterwards she sent us out back to play baseball. Frankly, I didn't like playing sports, so while the rest of the boys rushed out the back door, I snuck out the front and went home. I don't think I ever attended another scout meeting, despite repeated requests from my classmate.

One good thing did come from being a scout though, regardless of the brevity of my time there. The scouts put out a magazine called Boy's Life. I used to like to receive mail that had my name on it. It made me feel important. I liked reading the articles too, and there was the added bonus of the advertisements on the back page. HEY BOYS, SELL CARDS, WIN PRIZES!!! Hmmm... I liked prizes. The ad showed all manner of things that would delight the average fellow; baseball gloves, race car sets, models, roller skates, BB guns, and hey, what's this? A bow and arrow set. All I had to do was sell twelve boxes of greeting cards to win it. Well how hard can it be to sell twelve boxes of greeting cards? According to the ad, everyone wanted greeting cards, it would be a piece of cake. Being the brilliant young genius that I was, I placed an order.

A few weeks later the cards arrived and I set out to practice my skills as a salesman. At the tender age of ten, I made a startling discovery. Ads can sometimes be deceptive. It turned out that everyone doesn't want greeting cards; nor do they want goofy little kids knocking on their doors in the middle of the afternoon when they're trying to take a nap. It was like pulling teeth just to get my own mother and grandmother to each buy a box of the blasted things. I walked far and wide across the town trying to find some sympathetic old ladies to take the boxes off my hands. Day after endless day, while the rest of the guys in the neighborhood were out having fun, I was lugging around boxes of greeting cards, pleading with strangers to buy something they didn't want. Finally, in what seemed like an eternity, I finally managed to guilt enough people into purchasing the last of my stash. If I had known the chorus from Handel's Messiah, I'm sure I would have broken out into song.

I gave my mom the money I'd earned and she wrote a check to the company and sent it off. When you're a kid, having to wait on something you want is tortuous. Day after day I watched for the mailman, anticipating my prize. When it didn't come in what I considered a timely manner, I started to suspect that maybe he had absconded with it himself. After all, what guy wouldn't want a bow and arrow, even if he was old? I was starting to develop a skeptical attitude. First the ad said that the cards were in high demand. Then the prize was a long time in getting to me. I started to wonder if the archery set advertised wouldn't end up being some cheap kid's toy with rubber tipped arrows and a plastic bow, if I ever got it at all.

I had almost forgotten about the archery set altogether when the package arrived. I had just come in from playing with my friends when mom handed it to me. It was surprisingly large and heavy. With hands shaking in anticipation, I ripped apart the cardboard package and inside, much to my delight, was a real bow and arrow set, not some cheap imitation. The package contained a Ben Pearson fiberglass recurved bow with a twenty-five pound pull, three target arrows, a finger tab, an arm guard and a paper target. I had to hand it to the folks at the card company, they really came through.

I promptly took my prized possession upstairs and proceeded to string the bow. I wasn't about to waste any time. I wanted to start shooting something right now. As the old saying goes, ignorance is bliss. The fact that I didn't have the slightest idea of what I was doing didn't slow me down at all. I strung the bow, relying on my memory of the last cowboy and Indian movie I'd seen, and pulled the string back as far as I could. The string let loose with a velocity just short of the speed of light and snapped my right ear. Holy Toledo! Man that hurt! I reached up gingerly to see if I still had an ear or if it had been launched into my sister's bedroom where the cat might pick it up and snack on it. Seeing no blood on my hand, I guessed that I still had two ears. Whether or not I'd ever hear through the one was yet to be seen.

I went downstairs to dinner with an ear that was throbbing and shades of red, somewhere between the color of a beet and a strawberry. When my dad saw it, he naturally wondered what had happened. As I relived my experience he started to laugh. Of course I was glad to have put him in such a good mood, but I was in pain nonetheless. After supper he showed me the proper way to string the bow and promised that the next day he would bring home a bale of hay for me to practice in the back yard.

True to his word, a bale of hay appeared in the backyard, and for several weeks I spent every day after school practicing. It was very satisfying to hit the target anywhere, and while a few arrows accidentally found their way to the bull's eye, there was a surprising number that hit the top of the bale and rocketed across the yard, slid under the fence, and slammed into Mr. Merchant's garage door. No doubt the door could have been used to teach Braille, though what it might have said I've no idea. Probably something to the effect of "watch out for fools with bow and arrow sets."

As you might expect, it didn't take long before I tired of just shooting at a hay bale out back. As it was, I lived down the street from the only high school in town, and it had generous acreage on the grounds for practicing football, baseball and other sports. Of course having a bow and arrow made me an immediate celebrity to the neighborhood boys, and I had a following much like a cult leader every time I left the house with my weapon in hand.

We discovered that if I shot an arrow straight up into the air, it would waver for a second or two and then disappear altogether. Of course we found that fascinating until we realized that what goes up must come down. We covered all the points of the compass in a mad dash to safety, and when we thought we were sufficiently safe we turned to watch it slam into the earth with a satisfying thud, the shaft quivering in the ground. There were smiles all around that only the ignorant can produce.

The highlight of my time with that bow and arrow came one day in March. The high school was a great place to fly kites because of all the open area and a complete lack of telephone wires. It was windy; perfect kite weather. It just so happened that a girl from a few streets over was at the school at the same time I was. I had been entertaining myself shooting the only arrow I had left. I wasn't bothering anyone, and actually was on my way back home when I saw her. She had always been a bit of a brat, and I avoided her for the most part. As I was passing by she challenged me.

"Hey Tom, I bet you can't shoot my kite with that stupid bow of yours."

"Well go ahead and try." She said, in as snotty a voice as she could muster.

I drew the bow back as far as it would allow and let fly. Much to my surprise the arrow flew straight and true, right through the middle of that paper kite and landed twenty yards beyond. The kite ripped with a satisfying sound and started spinning like an ice skater in a competition. If it had only caught on fire I would have felt totally vindicated. It hit the ground with a thud. As a smile broke out on my face the brat started yelling.

"Oh noooo! You broke my kiiiiiite!

"I'm telling my mom" she cried, as she started running towards home, dragging her useless kite behind her by the string.

Of course knowing that I wouldn't get a fair trial at the hands of Mommy Dearest, I started sprinting towards my own home. I stopped and retrieved my arrow and continued towards my house, feeling like champion archers, Fred Bear, William Tell and Robin Hood all rolled into one. It was the most satisfying experience that I'd ever had in my young life and one that, obviously, I still haven't forgotten.

I'm always amazed that boys ever grow into men. We have a natural infatuation with all things dangerous apparently. However, by God's grace we do grow up, and it's those very experiences that help to shape us into the men that we become. I realize that this is not my whole life story. It's just a very small chapter in the book that is my life, but it's one that I remember with joy.
Pays one point and 2 member cents.


© Copyright 2021. T B Botts All rights reserved.
T B Botts has granted FanStory.com, its affiliates and its syndicates non-exclusive rights to display this work.


There's Gold in Them Thar Hills
The Glory of Autumn