The Red Swimsuit Story by alexisleech 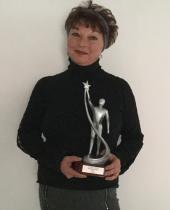 Alexis has always enjoyed writing and, having just finished her third novel, decided to put herself up for criticism at last...

The most bizarre week of my life.

I hate shopping, no seriously, I do. I’m one of those people who sees things I can’t afford when I find them, or can’t find anything I like when I can.

So it was a week ago, when I was looking for a new swimsuit while out shopping with my daughter. Having trawled through a couple of stores, I gave up because I couldn’t find anything to fit my rather peculiar shape.

Some would say I was lucky, having completely lost my bum in the last couple of years, but as that’s the only thing to have disappeared, I am now the shape of an upside down triangle, being size zero in the nether regions, but at least two sizes bigger on top. As for the middle, it’s okay, but certainly, in my opinion, not displayable at my age. So a bikini, which would solve the uneven size problem, was not up for discussion.

I said goodbye to my daughter, and headed for Marks and Spencer's with a view to catching a cab outside its rear doors. As I walked through the aisles of clothes, including their new range of swimwear, I suddenly stopped in my tracks. There in front of me was a lovely red swimsuit in a UK size ten, but with a size fourteen top. Thirty-five pounds later, I emerged with my coveted purchase, and grabbed a cab to go home.

“Guess what I found?” I excitedly told my daughter when I phoned her. When I explained that I’d found a swimsuit that actually fitted me, she was delighted. It meant our planned trips to go swimming could at last start because I had refused to be seen in my ‘baggy bottomed’ suits which had fitted fine before my bum had done a disappearing act.

“Get Richard to take a picture of you in it, mum,” she insisted, which was something I could easily organise with my digital camera, and wing over to her via an email.

Swimsuit donned, I was really quite pleased with my reflection, and had no problem getting my son to take a few fun shots of me as I did a couple of ‘Bay Watch’ type poses by sucking in my tummy, pushing back my shoulders, and smiling into the camera. I then downloaded them onto my laptop, and opened my email page to send the best picture over to my daughter, when I noticed I had a new message.

Now, I’m not looking for any sympathy, but spurned on by a miserable and rather lonely New Year, the third I had spent alone since my husband passed away, I joined a dating site on New Year’s Day. Once I'd joined, I more or less forgot all about it because I'd been uploading at least one chapter of ‘Lisa’ onto Fanstory every day for most of January and February, so had little time to do anything else. I had, however, uploaded a few recent pictures onto my profile, choosing a very respectable one of me wearing a jacket, hat, boots, polo necked sweater and trousers, as my main profile picture.

Okay, I appreciate that the only thing visible was my face, but I was still surprised when I received an email from one of the guys on the site that night which politely pointed out that seeing a little bit more of me would be helpful.

Yes, you’ve got it. Instead of sending the picture of me in my new swimsuit to my daughter, in a moment of madness, I posted it on the dating site with the accompanying caption ‘I’ve bought a new swimsuit!’ Pleased with myself for at last doing something positive about my lonely status, I went to watch one of my favourite TV programmes for an hour, and didn’t really think anymore about it.

Realising that I hadn’t sent the picture to my daughter before I sat down to watch my programme, I returned to my laptop when it was over, and I think the expression ‘Gob smacked’ is the only one I could use when I checked my emails.

There in my inbox, were over three hundred messages, and as I stared at the screen in disbelief, they were coming in at a rate of two or three a minute. By the time I went to bed an hour later, there were about four hundred and fifty, and by Sunday morning, nearly six hundred.

Having only read a couple of the messages, I went to church, had lunch with my daughter, and stayed out until nearly five o’clock. Sure enough, when I had the courage to go home and turn on my laptop, there were in excess of 850 messages, and I didn’t know whether to laugh or cry.

Monday arrived with the number approaching a thousand, so I contacted the dating site to ask if this kind of response to a newly posted profile picture was normal. When they confirmed that it certainly wasn’t, I contacted Marks and Spencer to tell them that I thought their swimsuits were amazing, and explained what had happened. The very complimentary response of a news agency sending a photographer to my flat the next day came as no surprise, because I'd already experienced one of the most bizarre 48 hours of my life since posting the picture.

When Wednesday dawned, I chickened out and deleted my profile and pictures from the dating site, and went out for lunch with a friend. I'd stopped counting at 1100, and had only read a few of the messages because the whole thing seemed so surreal. I’m quite a private person and, to be honest, I was beginning to feel rather embarrassed about the whole thing. The only thing I couldn’t understand when I went out, was the way everyone kept giving me knowing smiles at my local shop, and several people were not only staring at me in the restaurant, but one lady even introduced herself because she was sure that she knew me.

When I got home later that afternoon, I was delighted to see the emails had more or less stopped, and I sighed with relief. That is, until the phone calls from friends started. Apparently my pictures and story had been featured in at least three national newspapers, and it had even hit the news on the radio because the effect the picture had on the dating site was unprecedented. (That will teach me not to go out without my mobile!) It was eight o’clock before I actually got off the phone, and got out to buy a copy of one of the papers myself. (Cringe!)

So my apologies for not being on the site much, my friends, or starting to post my new book. Life has been rather hectic, and next week looks to be the same. All amazing, considering I only contacted Marks and Spencer because I thought they might give this poor old woman a free swimsuit….


My thanks to my son for taking a picture that's changed my life, and my daughter for caring so much!
Pays one point and 2 member cents.

alexisleech has granted FanStory.com, its affiliates and its syndicates non-exclusive rights to display this work.

Advertise With Us
The Little Man
The trap is set... will the little man fall?

Pays: 10 points. and 77 member cents
Copyright © 2000 - 2020 FanStory.com. All rights reserved. Terms under which this service is provided to you. Our privacy statement.
top
You Have No Rank
Share 4 posts to be ranked.